This Article is taken from, and can be read in full at, BBC NEWS 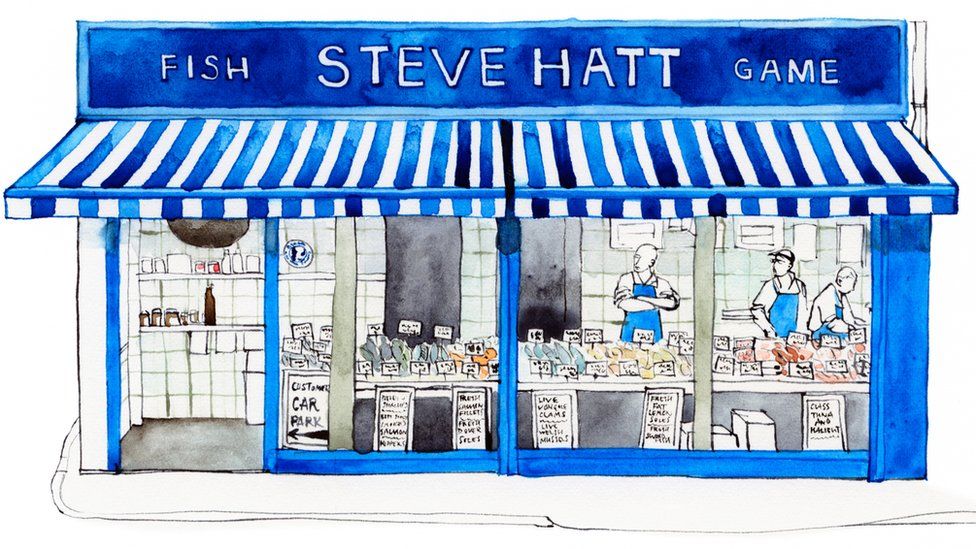 Artist Eleanor Crow's watercolours, celebrating the beauty of London's
classic shopfronts, are going
on display in the Capital. 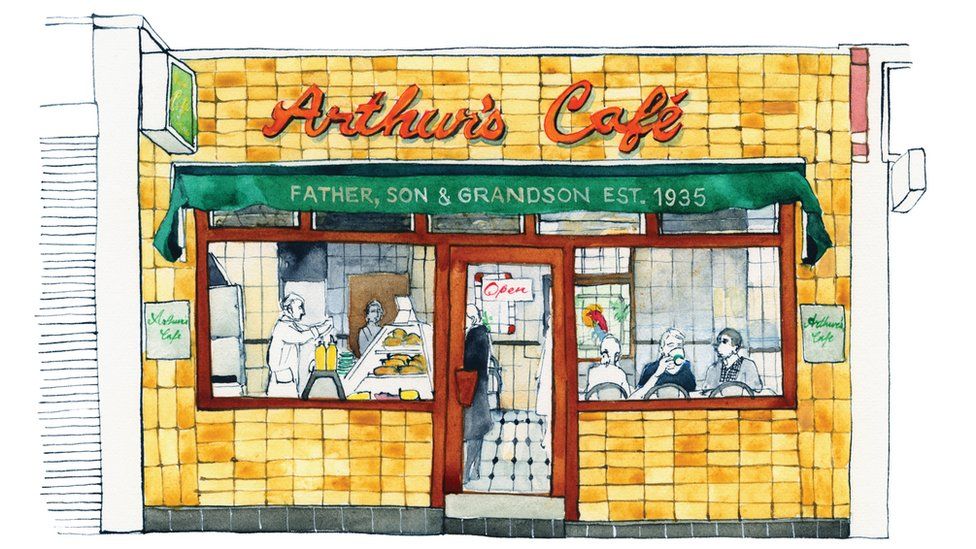 Arthur Woodham opened his own Café in 1948, having previously
worked in his father's Café of the same name just down the road.

Young Arthur ran his for seventy years until he was ninety,
along with his wife, Eileen, and, in recent years, grandson James.

Spotless, and serving up home-cooked breakfasts, followed by
traditional lunches with hand-cut chips, this celebrated destination
was frequented by loyal customers for seven decades until its closure in 2018. 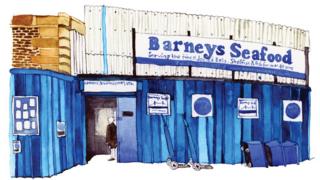 Tucked under a railway arch near the Tower of London, this legendary eel, fish and shellfish shop attracts hordes of East Enders, eager for eels freshly boiled on the premises.

The founder, Barney Gritzman, was the brother of Solly Gritzman, owner
of the famous Tubby Isaac's jellied eel stall. Barney opened his business before
the start of World War Two and it has been run by the Button family,
trading under the name Barneys, since 1970. 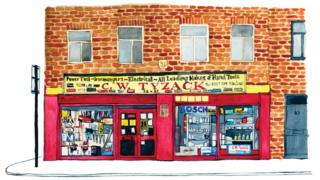 Cecil Tyzack founded his business in 1936 and his shop, further down
the Kingsland Road than Arthur's Café, is still open, although
it is no longer owned by the Tyzacks. The family name lives on as a
hand- and power-tool manufacturer, Tyzack Machine Knives.

Cecil was born into a branch of the Tyzack family of saw makers who came to London from Sheffield in 1839. They manufactured and sold tools from a succession of shops in Old Street until the beginning of this century. 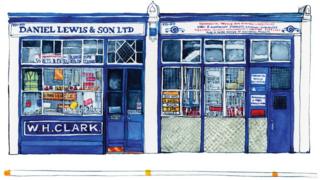 This was London's oldest ironmonger, originally founded by Presland & Sons in 1797, purpose-built as a shop and factory. In the 1890s it became W. H. Clark Ltd.

Daniel Lewis, who joined as a junior in 1948, took on the business in 1971 and continued trading under the Clark name. Daniel's son, David, worked there from 1992
and renamed it after his father in 2002.

In 2012, he was forced to close when council regulations prevented customers parking and restricted deliveries. Since I painted it, the shopfront has been replaced by a new replica, which is a close copy of this Georgian original.

Until the end, the original interior, with all its fittings and the manufacturing workshops at the rear, survived, revealing how the business evolved, supplying first the coach-building industry and then metal fabricators, architects and sculptors. 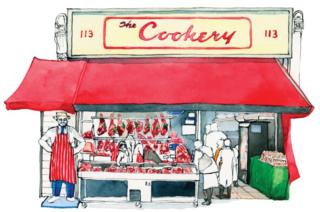 This drawing shows an uncharacteristically short queue. Often the line of customers extends all the way down the street, which is always a good sign - revealing that the meat is worth the wait.

I cherish this frontage, with its mid-century script in red on a glazed background, red canopy and grinning butcher mannequin, welcoming customers inside. 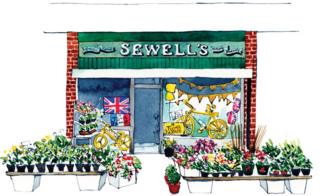 This florist in Plaistow has been run by the Sewell family since the 1930s
and is celebrated for its ingenious window displays.

I painted it during the Tour de France when the window
featured two bicycles adorned with flowers beneath strings of bunting
- all in yellow and adorned with Union Jacks in support of our team.

The wide pavement allows for a cheerful array of bedding plants outside to
greet customers before they enter the fragrant interior, filled with buckets of cut flowers. 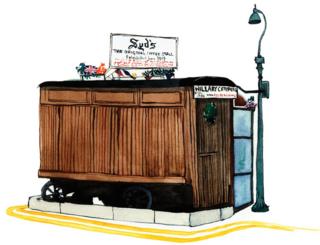 London's oldest coffee stall has been open for a century
and is still run by Sydney Tothill's granddaughter, Jane.

This mahogany refreshment stall is one of my favourite London landmarks. It has moved from its pitch only once, to feature in the film Ebb Tide, starring Chili Bouchier, in 1931.

The stall opened 24 hours a day during World War Two, when the War Office brought Syd's son (also Syd) back from a secret mission to ensure the supply of hot tea to the ambulance and fire brigades during the London Blitz, after Syd senior was
traumatised by a bomb that exploded nearby.

The work can be seen at the Townhouse Gallery in Spitalfields until 20 October 2019
and is published by Spitalfields Life Books in collaboration with Batsford Books.

All illustrations by Eleanor Crow.
Posted by Zephyrinus at 12:00:00

Please help me to keep this Blog going for you. Thank You and God Bless.

"Together In Electric Dreams".