Text and illustrations taken from Wikipedia - the free encyclopedia,
unless otherwise stated. 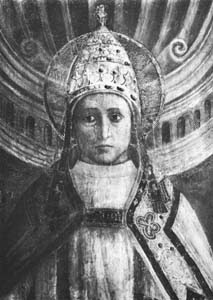 
Pope Saint Zephyrinus, born in Rome, was bishop of Rome from 199 to 217. His predecessor was bishop Victor I. Upon his death on 20 December 217, he was succeeded by his advisor, bishop Callixtus I.

During the 17-year pontificate of Zephyrinus, the young Church endured severe persecution under the Emperor Severus, until his death in the year 211. To quote Butler (Ref. A. Butler: Lives of the Saints Vol VIII, 1866), St Zephyrinus was the support of his flock. He also endured the trials associated with new heresies and apostases. The chief among these were Marcion, Praxeas, Valentine and the Montanists.

St. Optatus testifies that all of these were subdued by Zephyrinus, Bishop of Rome. (Ref. Optat. 1,1 De Schismate, n.9 et Albaspinæus, not.ib.) Eusebius insists that Zephyrinus fought vigorously against the blasphemies of the two Theodotuses, who, in response, treated him with contempt, but later called him the greatest defender of the divinity of Christ.

Although he was not physically martyred for the Faith, his suffering – both mental and spiritual – during his pontificate have earned him the title of martyr. (Ref. Berti in Sæc 3. Diss. 1.t. 2 p 158). During the reign of Emperor Severus (193 A.D. – 211 A.D.), relations with the young Christian Church deteriorated, and in 202 A.D. or 203 A.D. the edict of persecution appeared which forbade conversion to Christianity under the severest penalties. (Ref Opus cit Butler)

A certain Proclus (or Proculus), who had confessed the Faith before the prosecutors and underwent torments in defence of it, subsequently was seduced into heresy by Asclepiodotus and Theodotus the banker. These were disciples of Theodotus the Tanner, whom Victor, Zephyrinus's predecessor in the Chair of Peter, had excommunicated for reviving the heresy of Ebion, that affirmed that Christ was only a mere man, though a prophet.

These two heretics persuaded Natalis to allow them to ordain him a bishop in their sect, promising in return that they would provide him with a monthly stipend of 150 silver denarii (approximately 3 Pounds sterling). But God, having compassion on his Confessor, warned him by several visions to abandon these heretics.
At last, he was whipped a whole night by an angel. The next day he donned sackcloth and ashes, and,  weeping bitterly, threw himself at the feet of Zephyrinus. (Ref Butler;Op. cit.).

The feast of St Zephyrinus, Pope and Martyr, formerly held on 26 August, has been celebrated since 1970 on 20 December, the date of his death. Some Traditionalist Catholics continue to observe pre-1970 calendars.
Posted by Zephyrinus at 12:07:00
Labels: Martyr, Pope Saint Zephyrinus, Rome