Text and Illustrations from Wikipedia - the free encyclopaedia,
unless otherwise stated. 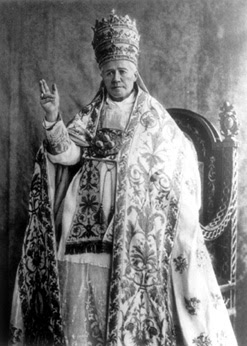 Pius X rejected Modernist interpretations of Catholic Doctrine, promoting Traditional devotional practices and orthodox theology. His most important reform was to publish the first Code of Canon Law, which collected the laws of the Church into one volume for the first time. He was a pastoral Pope, encouraging personal piety and a lifestyle reflecting Christian values. He was born in the town of Riese, which would later append "Pio X" (Pius X's name in Italian) to the town's name.

Pius X was particularly devoted to Mary; his Encyclical, "Ad Diem Illum", expresses his desire, through Mary, to renew all things in Christ, which he had defined as his motto in his first Encyclical. Pope Pius X believed that there is no surer or more direct road than by the Virgin Mary to achieve this goal. Pius X was the only Pope in the 20th-Century with extensive pastoral experience at the Parish level, and pastoral concerns permeated his Papacy; he favoured the use of the vernacular in Catechesis. Frequent Communion was a lasting innovation of his Papacy.


His immediate predecessor had actively promoted a synthesis between the Catholic Church and secular culture; Faith and Science; and Divine Revelation and Reason. Pius X defended the Catholic Faith against popular 19th-Century views, such as indifferentism and relativism, which his predecessors had warned against, as well. He followed the example of Pope Leo XIII by promoting Thomas Aquinas and Thomism as the principal philosophical method to be taught in Catholic institutions. Pope Pius X opposed Modernism, which claimed that Roman Catholic Dogma should be modernised and blended with 19th-Century philosophies. He viewed Modernism as an import of secular errors affecting three areas of Roman Catholic belief: Theology; Philosophy, and Dogma.

Personally, Pius X combined, within himself, a strong sense of compassion, benevolence and poverty, but also stubbornness and a certain stiffness. He wanted to be pastoral and was the only Pope in the 20th-Century who gave Sunday Sermons every week.

After the 1908 Messina earthquake, he filled the Apostolic Palace with refugees, long before the Italian government acted. He rejected any kind of favours for his family; his brother remained a postal clerk, his favourite nephew stayed on as village Priest, and his three sisters lived together, close to poverty, in Rome. He often referred to his own humble origins, taking up the causes of poor people. I was born poor, I have lived poor, and I wish to die poor. Considered a holy person by many, public veneration of Pope Pius X began soon after his death. Numerous petitions resulted in an early process of Beatification.

Giuseppe Melchiorre Sarto was born in Riese, Kingdom of Lombardy-Venetia, Austrian Empire (now Italy). Some sources say that his father, Giovanni Sarto (in Polish, Jan Krawiec, in German, Jan Krawietz) was a Pole, who emigrated to today's Italy from Boguszyce - a village in the district of Toszek, within Gliwice, Silesian Voivodeship, in Southern Poland; located exactly in Upper Silesia "for a better life". Then changed his name from Krawiec to Sarto. However, officially, Vatican genealogy states that Giuseppe Melchiorre Sarto was the second-born of ten children of Giovanni Battista Sarto (1792–1852) and Margarita Sanson (1813–1894).

Many historians believe that Vatican rulers had their own goal in hiding his Polish ancestry from his father's side, due to his "dangerous" beliefs. He was baptised 3 June 1835. Giuseppe's childhood was one of poverty, being the son of the village postman. Though poor, his parents valued education, and Giuseppe walked six kilometers to school each day.

At a young age, Giuseppe studied Latin with his village Priest, and went on to study at the Gymnasium of Castelfranco Veneto. "In 1850, he received the Tonsure from the Bishop of Treviso, and was given a scholarship [from] the Diocese of Treviso" to attend the Seminary of Padua, "where he finished his classical, philosophical, and theological studies with distinction" ["Pope Pius X". Catholic Encyclopedia. New York: Robert Appleton Company. 1913.] 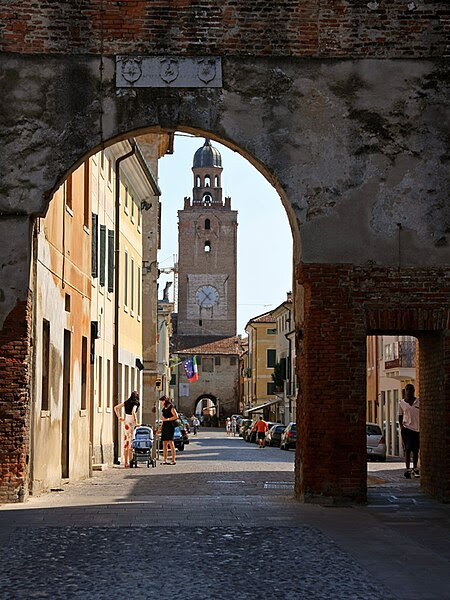 On 18 September 1858, Sarto was ordained a Priest, and became Chaplain at Tombolo. While there, Father Sarto expanded his knowledge of Theology, studying both Saint Thomas Aquinas and Canon Law, while carrying out most of the functions of the Parish Pastor, who was quite ill. In 1867, he was named Archpriest of Salzano. Here he restored the Church and expanded the hospital, the funds coming from his own begging, wealth and labour. He became popular with the people when he worked to assist the sick during the cholera plague that swept into Northern Italy in the early 1870s.

He was named a Canon of the Cathedral and Chancellor of the Diocese of Treviso, also holding Offices, such as Spiritual Director and Rector of the Treviso Seminary, and Examiner of the Clergy. As Chancellor,  he made it possible for public school students to receive religious instruction. As a Priest and, later, Bishop, he often struggled over solving problems of bringing religious instruction to rural and urban youth, who did not have the opportunity to attend Catholic schools.

In 1878, Bishop Zanelli died, leaving the Bishopric of Treviso vacant. Following Zanelli's death, the Canons of Cathedral Chapters (of which Monsignor Sarto was one) inherited the episcopal jurisdiction as Corporate Body, and were chiefly responsible for the election of a Vicar-Capitular, who would take over the responsibilities of Treviso until a new Bishop was named. In 1879, Sarto was elected to the position, in which he served from December of that year to June 1880.

After 1880, Sarto taught Dogmatic Theology and Moral Theology at the Seminary in Treviso. On 10 November 1884, he was appointed Bishop of Mantua, by Pope Leo XIII. He was Consecrated six days later, in the Church of Sant'Apollinare alle Terme Neroniane-Alessandrine, Rome, by Lucido Cardinal Parocchi, assisted by Pietro Rota, and by Giovanni Maria Berengo.

He was appointed to the honorary position of Assistant at the Pontifical Throne on 19 June 1891. Father Satro required Papal dispensation, from Pope Leo XIII, before Episcopal Consecration, as he lacked a Doctorate, making him [in his later life] the last Pope without a Doctorate. 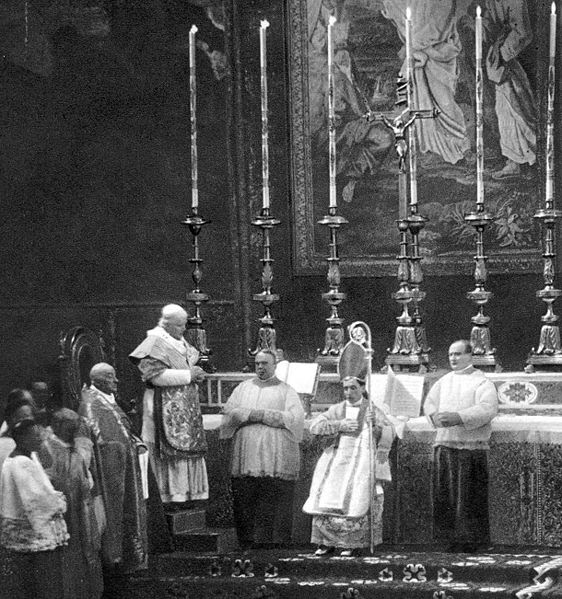