Charles Eamer Kempe (1837 - 1907). Victorian Stained-Glass Designer. "If I Was Not Permitted To Minister In The Sanctuary, I Would Use My Talents To Adorn It".

Text and Illustrations from Wikipedia - the free encyclopaedia,
unless otherwise stated. 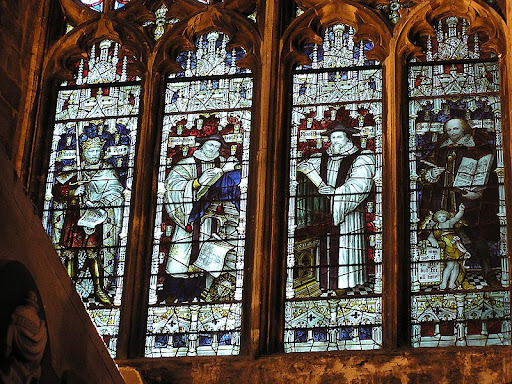 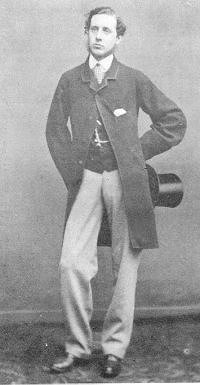 
Charles Kempe was born at Ovingdean Hall, near Brighton, West Sussex, in 1837. He was the youngest son of Nathaniel Kemp, a cousin of the Thomas Read Kemp, a politician and property developer responsible for the Kemptown area of Brighton [Note: Kemp added the final "e" to his surname in later life], and the maternal grandson of Sir John Eamer, who served as Lord Mayor of London in 1801. 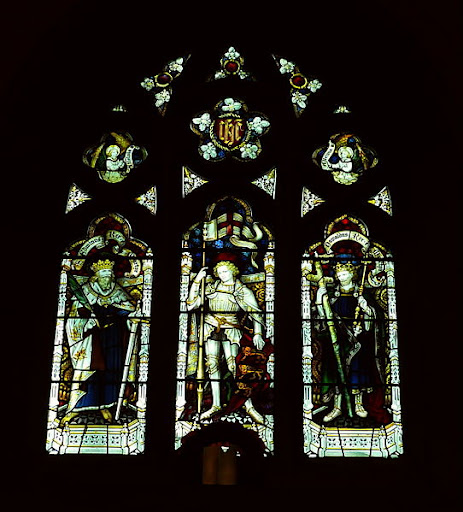 Interior of Church of Saint Paul, Mirfield, West Yorkshire, England, designed by William Swinden Barber in 1881. Showing a particularly fine window on the South Wall, by Charles Eamer Kempe. The East and West Windows were there in 1881 at the Consecration ceremony, but the date of this one is unknown - possibly 1902, after the Second Boer War, since it shows war-like Mediaeval heroes, King Arthur, Saint George, and Saint Oswald (Oswald of Northumbria).
Photo: 8 April 2014.
Source: Own work.
Author: Linda Spashett Storye book.
(Wikimedia Commons)

After attending Twyford School, he attended Pembroke College, Oxford, where he was influenced by the Anglo-Catholic Tractarian revival and considered a vocation to the Priesthood. When it became clear that his severe stammer would be an impediment to preaching, Kempe decided that "if I was not permitted to Minister in the Sanctuary, I would use my talents to adorn it", and subsequently went to study architecture with the firm of a leading ecclesiastical architect, George Frederick Bodley, where he learned the aesthetic principles of Mediaeval Church Art, particularly Stained-Glass.


During the 1860s, Kempe collaborated with Bodley on the internal painting of two Churches, All Saints, Jesus Lane, in Cambridge, and Saint John’s, The Brook, in Liverpool. Later, in 1892, Bodley and Kempe would work together once more on All Saints, Danehill, East Sussex. 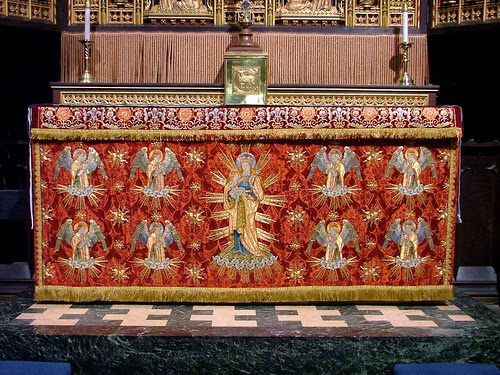 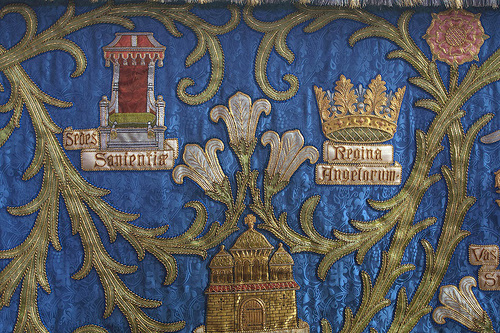 In 1866, he opened a studio of his own in London, supplying and creating Stained-Glass and Furnishings and Vestments. The firm prospered and by 1899 he had over fifty employees. As a trademark, the firm used a Golden Garb, or Wheat-Sheaf, taken from Kempe's own Coat-of-Arms. The Mid-Victorian period were important years in the history of the design of English Churches and Kempe’s influence is found in numerous examples, many in his home County of Sussex, which has 116 examples of his work.


The works at Saint Mark’s, Staplefield, near Horsham, West Sussex, dating from 1869, are regarded as especially important, representing the earliest of three known examples of Kempe’s Wall Painting. They contain key elements of Kempe’s figurative work. The Angels, holding the scroll, are magnificently apparelled and the borders of their cloaks are embellished with pearls, each individually highlighted, although they don’t contain a design of peacock feathers, a well-used embellishment in later works. 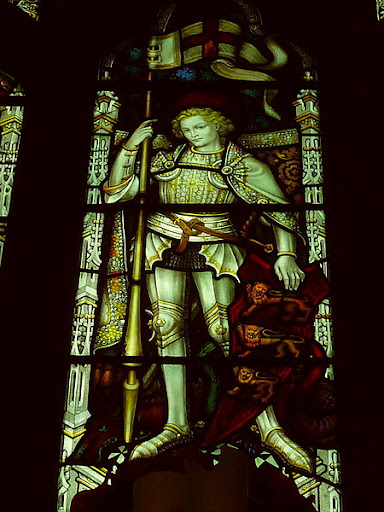 Rosalie Glynn Grylls, Lady Mander, whose home, Wightwick Manor, near Wolverhampton, contains many pieces of Kempe's Stained-Glass, wrote in 1973: "Kempe's work has a unique charm; its colours shine out from jewels, that cluster on the Mitres or the Crowns that his figures wear, and from their peacocks' feathers, while Angels, playing their instruments, are drawn with tender delicacy and scattered above the main windows informally, but making a pattern of precision. Above all, the prevailing yellow-wash is literally translucent, for it lets through the rays of the full-, or the setting-, sun . . ." 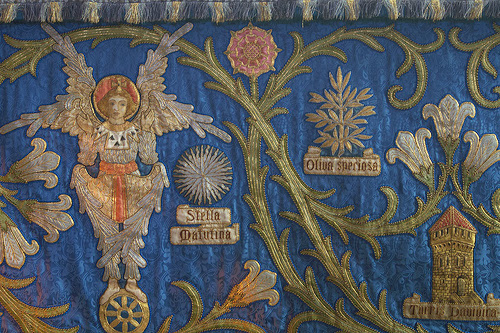 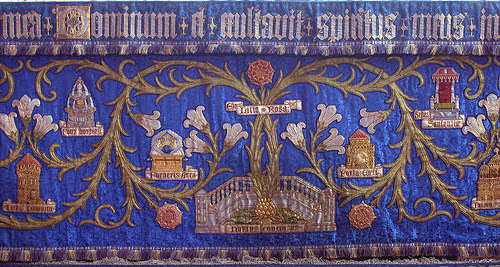 Kempe was a rather shy person, who never married. He continued to live in Sussex most of his life and, in 1875, he bought and renovated an Elizabethan House at Lindfield, near Haywards Heath, in West Sussex. Kempe would entertain his clients and professional colleagues from his home, enjoying the role of a Country Squire.


Kempe died in 1907 and is buried in the Churchyard at Saint Wulfran's Church, Ovingdean. Unfortunately, most of Kempe's records were disposed of after the firm shut in 1934.

The following Text is taken from THE KEMPE SOCIETY


In 1869, dissatisfied with the quality of the work produced for him, Kempe started his own workshop at Millbrook Place, London, with the professional co-operation of Fred Leach. The idea for a design would first be drawn by Kempe, and then the full size cartoon would be produced in his studios by his chief draughtsman and a team of artists, who added the detailed decoration. The cartoon was then taken to his Millbrook works for glass cutting, painting and leading. The glass was always carefully selected, supplied by either Messrs Miller Beal and Hilder Ltd., or James Hetley and Co., at 35 Soho Square, London, who reserved a room for Kempe’s glass.


In 1888, the studios and offices moved to 28 Nottingham Place, in Central London., and by the end of the Century he employed over fifty people.


Such success and demand was bound to lead to repetition, and some of Kempe’s later work involved adapting earlier designs. But, unlike other large Victorian studios, he never allowed the quality or individuality of his work to deteriorate. The senses are always thrilled by the spirituality of his Stained-Glass.

His studios, in spite of their heavy commitment to Stained-Glass, also produced designs for Church Furniture, Reredos, Screens, Altars, and Panelling. Kempe continued to design splendid Vestments and Altar Frontals (Antependiums) that were embroidered exquisitely by the Anglican Order of Clewer Sisters.


The decade from 1895-1905 was the busiest the Kempe Glass-Works were to experience and it was to culminate in a commission to produce a window of Saint George, for Buckingham Palace. This window, the victim of wartime bombing, can now be seen in the Ely Stained-Glass Museum in Ely Cathedral, Cambridgeshire, England.

After 1895, the Shield Logo was replaced by a Single Wheatsheaf,
usually in the bottom left-hand corner of a Stained-Glass Window.
Illustration: KEMPE STAINED GLASS

Kempe kept up his business interests with great energy, busily visiting sites ("such motor journeys !" he writes in 1905); making sketches for designs and watching the effects in the Glass-Works. But for some years before Kempe’s death, John Lisle had become the ghost designer for the firm and Kempe, who still enjoyed initiating a project and making suggestions, came to rely more and more on his junior’s collaboration, eventually handing responsibility for designs to him.


From 1895, the studios used the Wheatsheaf, taken from Kempe’s Family Coat-of-Arms, to sign their work. This simplified the complete Arms of "Gules three garbs within a bordure engrailed", which had been used sparingly.

On Kempe's death in 1907, the Single Wheatsheaf Logo was replaced with the Single Golden Wheatsheaf with a Black Tower superimposed on the head. The last Stained-Glass Window of the firm's production had the Black Tower laid on its side to denote the last of its line.
Illustration: KEMPE STAINED GLASS