The Seven Joys Of Mary. Mother of Jesus.


Text is from Wikipedia - the free encyclopædia,
unless stated otherwise. 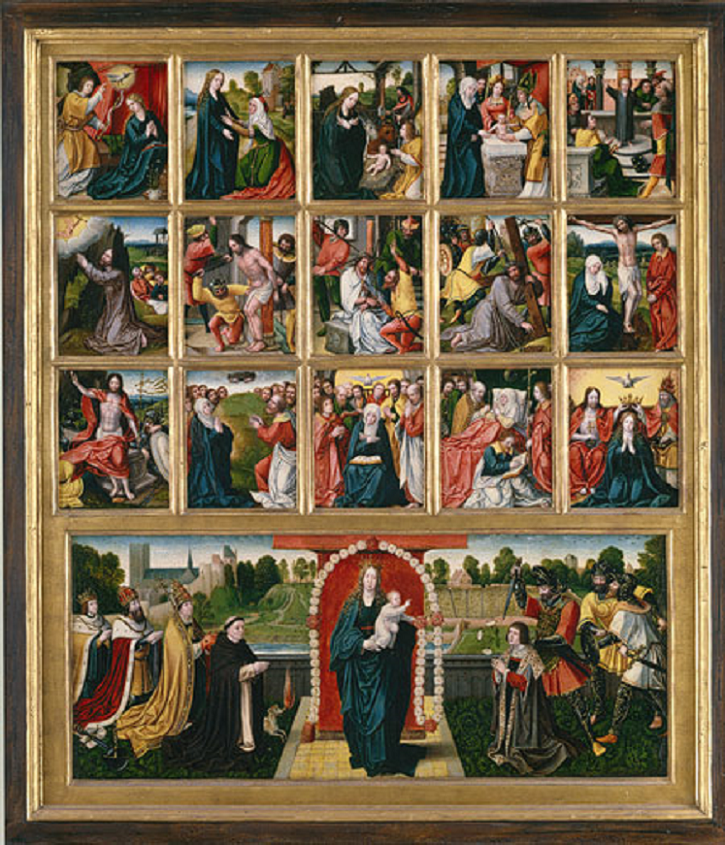 English: The Fifteen Mysteries of The Rosary
and The Virgin of The Rosary.
Français: Quinze mystères. Manteau de la Vierge.
This File: 20 August 2009.
User: BAILLEUL
(Wikimedia Commons)
The Seven Joys of The Virgin (or, “of Mary, The Mother of Jesus”) is a popular Devotion to events of The Life of The Virgin Mary, arising from a Trope of Mediæval Devotional Literature and Art.

The Seven Joys of The Virgin were frequently depicted in Mediæval Devotional Literature and Art.
The Seven Joys are usually listed as:
The Annunciation;
The Nativity of Jesus;
The Adoration of The Magi;
The Resurrection of Christ;
The Ascension of Christ into Heaven;
Pentecost, or Descent of The Holy Ghost,
upon The Apostles and Mary;
The Coronation of The Virgin in Heaven. 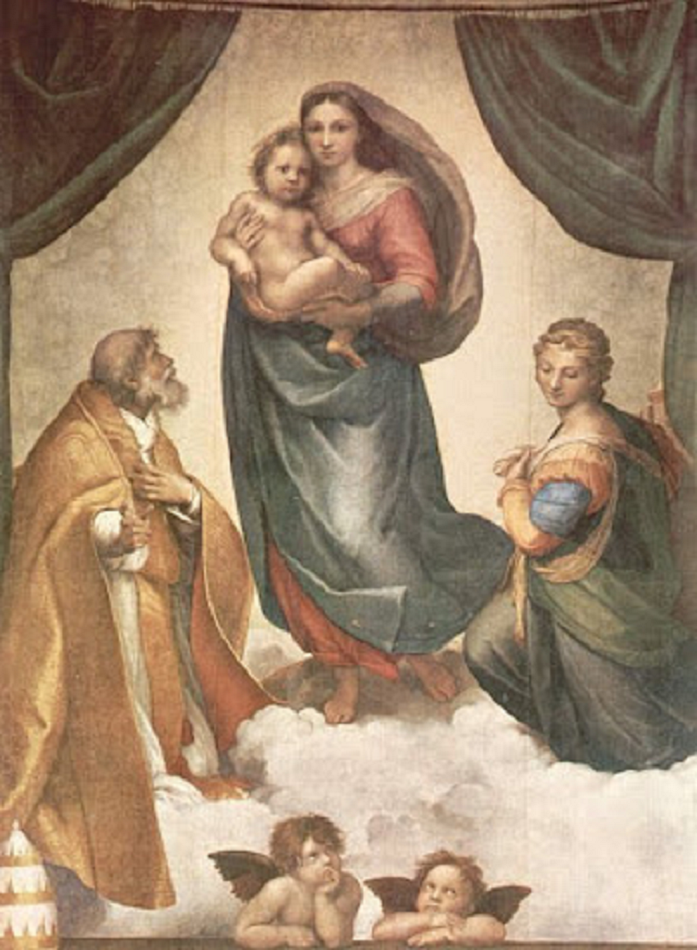 Raphael's Sistine Madonna painting (1513), Saint Peter's Basilica, Rome,
is considered a key example of High Renaissance Art.
Alternative choices were made, and might include The Visitation and The Finding in The Temple, as in The Franciscan Crown form of Rosary, which uses The Seven Joys, but omits The Ascension and Pentecost.

Depiction in Art of The Assumption of Mary may replace, or be combined with, The Coronation of Our Lady in Heaven, especially from the 15th-Century, onwards; by the 17th-Century, it is the norm. As with other sets of scenes, the different practical implications of depictions in different media, such as painting, ivory miniature carving, Liturgical Drama, and music, led to different conventions by medium, as well as other factors, such as geography and the influence of different Religious Orders. There is a matching Set of Seven Sorrows of The Virgin; both Sets influenced the selection of scenes in depictions of The Life of The Virgin.

Originally, there were “Five Joys Of The Virgin”. Later, that number increased to seven, nine, and even fifteen, in Mediæval Literature, although seven remained the most common number, and others are rarely found in Art.

The “Five Joys Of Mary” are mentioned in the 14th-Century poem “Sir Gawain and The Green Knight” as a source of Gawain's strength. The Devotion was especially popular in Pre-Reformation England. The French writer Antoine de la Sale completed a satire called “Les Quinze Joies de Mariage” (“The Fifteen Joys of Marriage”) in about 1462, which partly parodied the form of “Les Quinze Joies de Notre Dame” (“The Fifteen Joys of Our Lady”), a popular Litany.
Posted by Zephyrinus at 11:00:00

Email ThisBlogThis!Share to TwitterShare to FacebookShare to Pinterest
Labels: The Seven Joys of Mary. Mother of Jesus.