The Apparition Of Saint Michael The Archangel. Feast Day 8 May.

The Apparition of Saint Michael the Archangel.
Feast Day 8 May. 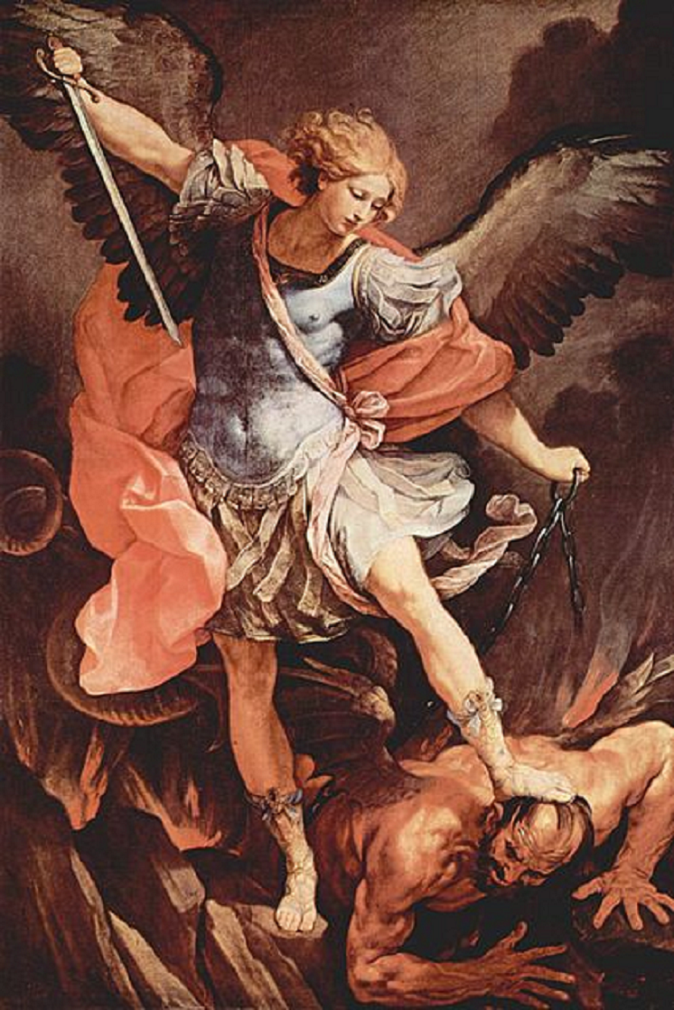 Saint Michael the Archangel.
Artist: Guido Reni (1575–1642).
Date: Circa 1636.
Current location: Church of Santa Maria della Concezione, Rome.
Source/Photographer: The Yorck Project:
10.000 Meisterwerke der Malerei.
DVD-ROM, 2002. ISBN 3936122202.
Distributed by DIRECTMEDIA Publishing GmbH.
Permission: [1]
(Wikimedia Commons)
Saint Michael The Archangel Prayer.
Available on YouTube at
YOU TUBE
The Easter Feasts are those of Angelical Spirits, for The Resurrection “gives joy also to The Angels,” says Saint Gregory, “because, in opening Heaven to us, again, it makes up for the losses which their ranks had sustained.”

The Feast of The Apparition of Saint Michael, the Chief of The Celestial Hosts, shows forth, in this Paschaltide, all the grandeur of The Saviour's Triumph.

Saint Michael, himself, comes to defend us in battle (Alleluia). He came down from Heaven (Ibid) and appeared in Italy, towards 525 A,D,, under the Pontificate of Pope Gelasius I, in Apulia, on the summit of Monte Gargano, near the Adriatic and the ancient Sipontum.

He requested that a Sanctuary should be erected to him, where God should be Worshipped, in Memory of himself and all The Angels, and this place became celebrated on account of numerous Miracles. 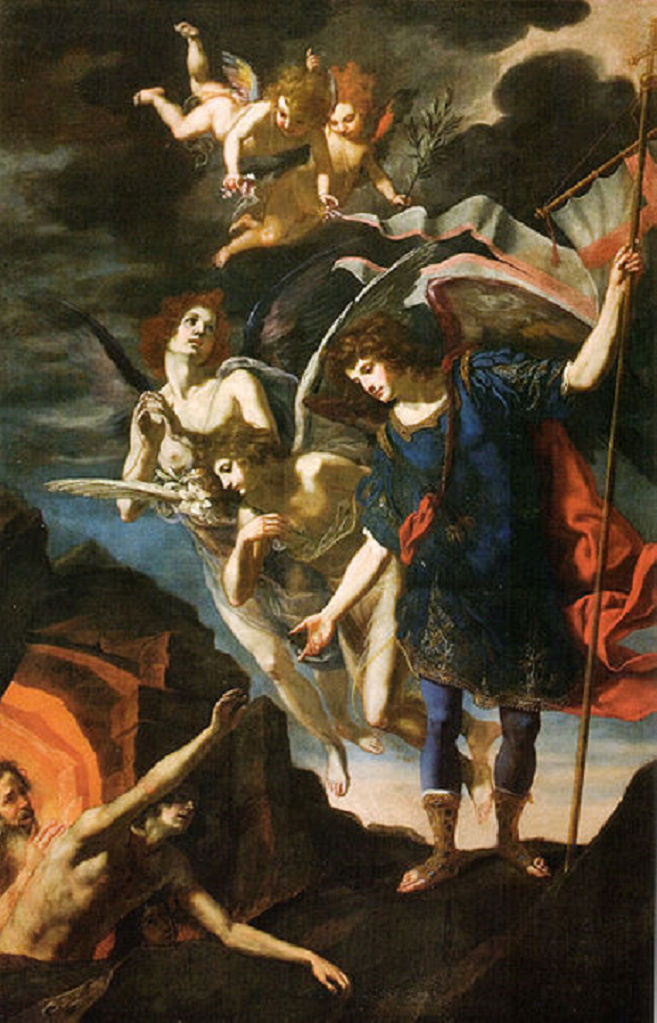 Saint Michael the Archangel is referred to in The Old Testament and has been part of Christian teachings since the earliest times. Throughout the Centuries, specific Roman Catholic Traditions and views on Saint Michael have taken shape, as recently as the 19th- and 20th-Centuries.

A specific “Prayer to Saint Michael” was promoted by Pope Leo XIII in 1886, and, as recently as 1994, was reinforced by Pope Saint John Paul II, who encouraged the Catholic Faithful to continue to Pray it, saying: “I ask everyone not to forget it and to recite it to obtain help in the battle against Forces of Darkness.”

Saint Michael has specific roles, within Roman Catholic teachings, that range from, acting as the chief opponent of Satan, to saving Souls at the hour of death. Roman Catholic literature and Traditions continue to point to Saint Michael in contexts as varied as the protection of The Catholic Church, to The Consecration of Russia, by Pope Pius XII and Pope Saint John Paul II.
PRAYER TO
SAINT MICHAEL THE ARCHANGEL
added by Pope Leo XIII, in 1886,
to The Leonine Prayers,
at The Foot of The Altar,
after Low Mass. 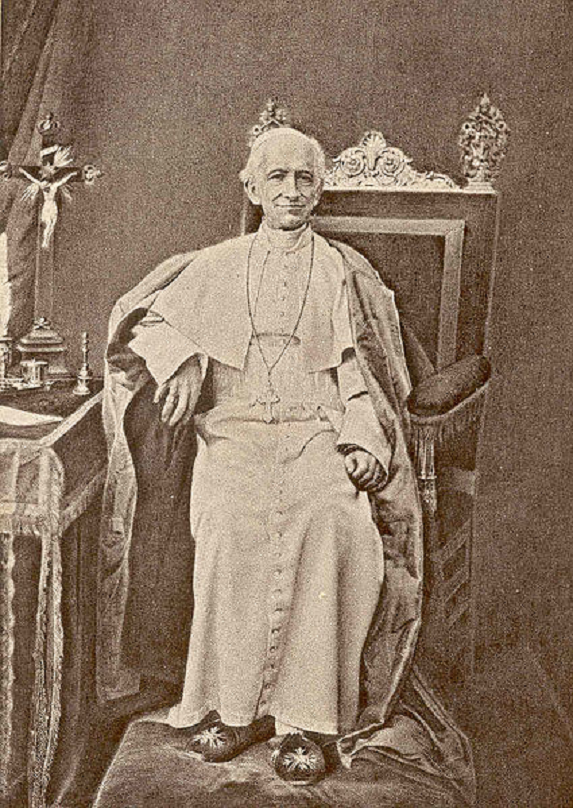 Pope Leo XIII, in 1880.
Source: 1880 book on Pope Leo XIII.
Author: Karl Benzinger.
(Wikimedia Commons)
Holy Michael Archangel,
defend us in the day of battle;
be our safeguard against the wickedness
and snares of the devil.
May God rebuke him,
we humbly Pray,
and do thou,
Prince of the Heavenly host,
by the power of God,
thrust down to Hell,
Satan and all wicked spirits,
who wander through the World
for the ruin of Souls.
Amen. 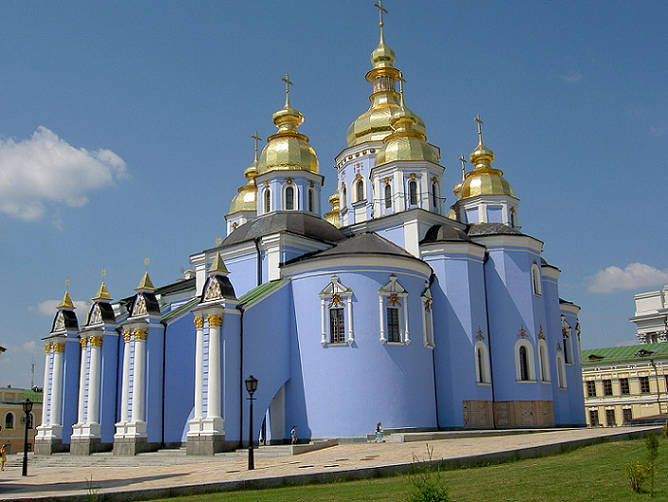 The Prayer to Saint Michael is an Invocation, used mainly by Catholics, addressed to Michael the Archangel.

Pope Leo XIII added it, in 1886, to The Leonine Prayers, which he had directed to be said after Low Mass, two years earlier. Pope Saint John Paul II referred to The Saint Michael Prayer in his Regina Cœli Address of 24 April 1994, as follows:

“May Prayer strengthen us for the spiritual battle that The Letter to the Ephesians speaks of: ‘Be strong in The Lord and in the strength of His Might’ (Ephesians 6:10). The Book of Revelation refers to this same battle, recalling before our eyes the image of Saint Michael The Archangel (cf. Revelation 12:7).

“Pope Leo XIII certainly had this picture in mind when, at the end of the 19th-Century, he brought in, throughout The Church, a special Prayer to Saint Michael: ‘Saint Michael The Archangel, defend us in The Day of Battle. Be our protection against the wickedness and snares of the devil . . .’

Email ThisBlogThis!Share to TwitterShare to FacebookShare to Pinterest
Labels: The Apparition Of Saint Michael The Archangel. Feast Day 8 May.