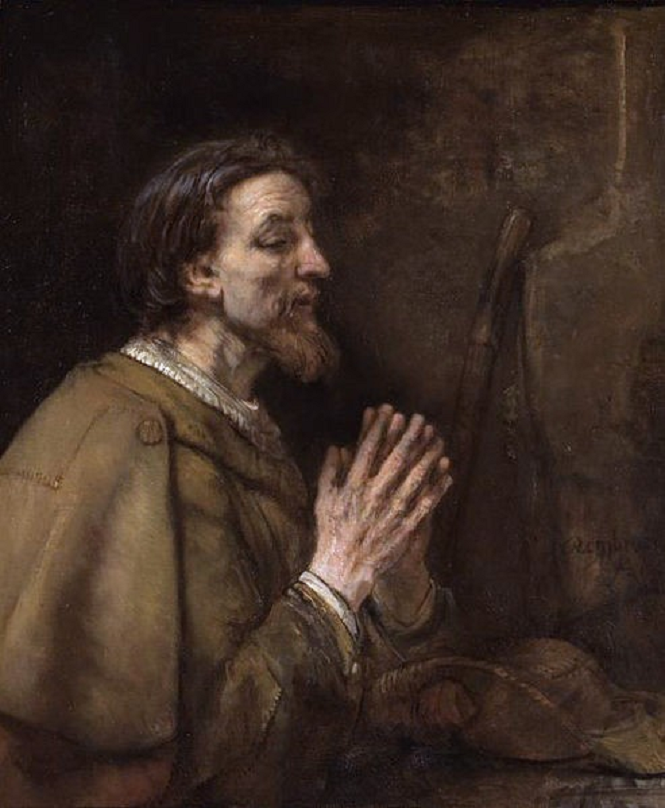 Saint James the Greater.
Clothed as a Pilgrim. Note the Scallop Shell on his shoulder,
and his Staff and Pilgrim's Hat, beside him.
Artist: Rembrandt (1606–1669).
Date: 1661.
(Wikimedia Commons)

Saint James the Greater.
Illustration: UNA VOCE OF ORANGE COUNTY
Artist: René de Cramer.
“Copyright Brunelmar/Ghent/Belgium”.
Used with Permission.
Saint James, brother of Saint John, and son of Zebedee, was a native of Bethsaida, in Galilee. He is surnamed "the Greater", i.e., the Elder.

One day, his mother, approaching The Saviour, asked of Him "the favour for her two sons to be seated, one at His Right-Hand and the other at His Left-Hand, in His Kingdom" (Gospel). Christ then foretold their Martyrdom. Saint James "shall sit on a Throne to judge The Twelve Tribes of Israel" (Communion), but he will first have to mix his blood with that of Jesus (Gospel) and undergo, like all The Apostles, a life of suffering and persecution, such as the Epistle describes.

After the Ascension of Jesus Christ to Heaven, says The Office of today, James preached His Divinity in Judea and Samaria. He soon betook himself to Spain. When he returned to Jerusalem, Herod Agrippa, desiring to please the Jews, condemned him to death and he was beheaded towards the year 42 A.D., a short time before The Feast of Easter.

It would seem that, for fear of the Arabs, who were masters of Jerusalem, the body of The Saint was later carried to Compostella, in Spain, where he is greatly honoured. 25 July recalls the date of this Translation.

His name is inscribed in The Canon of The Mass, with that of Saint John, his brother (First List).