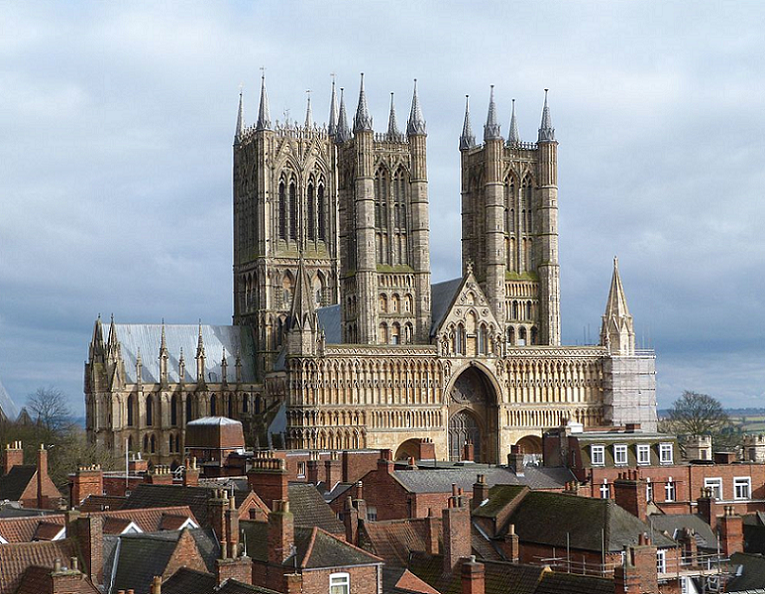 Text from Wikipedia - the free encyclopædia,
unless stated otherwise.
Lincoln Cathedral, Lincoln Minster, or the Cathedral Church of The Blessed Virgin Mary of Lincoln and, sometimes Saint Mary's Cathedral, in Lincoln, England, is a Grade I Listed Cathedral and is the Seat of the Anglican Bishop of Lincoln.
Construction commenced in 1072 and continued in several phases throughout the High Middle Ages. Like many of the Mediæval Cathedrals of England, it was built in the Early Gothic Style.

Although considered doubtful by some, many historians claim it became the tallest building in the World upon the completion of its 160 metres (520 ft) high Central Spire in 1311; if so, it was the first building to hold that title after the Great Pyramid of Giza, and held it for 238 years until the Spire collapsed in 1548,[2][3][4] and was not rebuilt.
Lincoln Cathedral.
Available on You Tube at
YOU TUBE 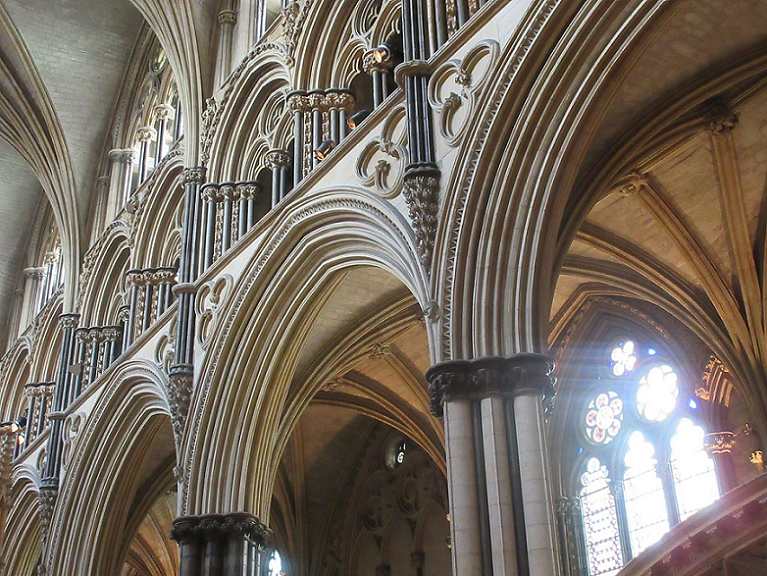 Had the Central Spire remained intact, Lincoln Cathedral would have remained the World's tallest structure until the completion of the Eiffel Tower in 1889. For hundreds of years, the Cathedral held one of the four remaining copies of the original Magna Carta, now securely displayed in Lincoln Castle.
The Cathedral is the fourth largest in the U.K. (in floor area) at around 5,000 square metres (54,000 sq ft), after Liverpool, Saint Paul's, and York Minster.[5] It is highly regarded by architectural scholars; the Victorian writer, John Ruskin, declared: "I have always held . . . that the Cathedral of Lincoln is, out and out, the most precious piece of architecture in The British Isles and, roughly speaking, worth any two other Cathedrals we have.". 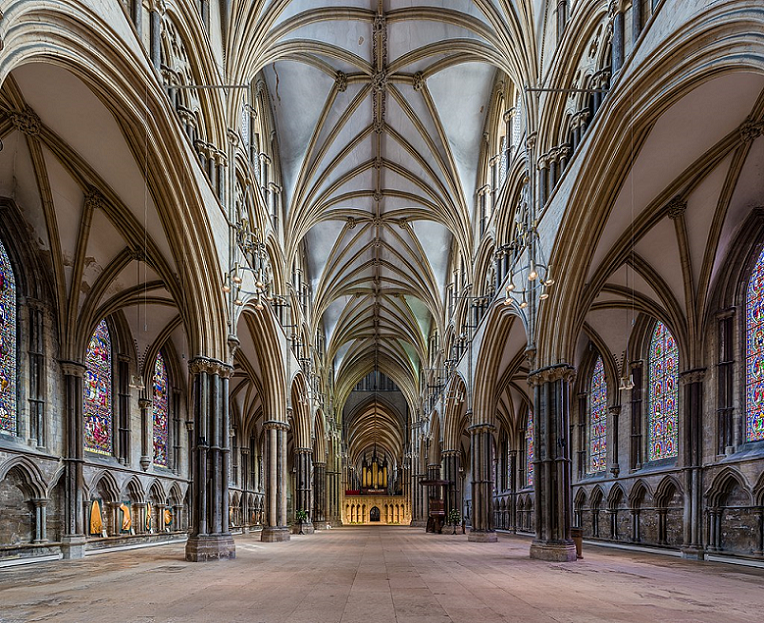 The Nave,
Lincoln Cathedral.
Photo: 30 July 2014.
Source: Own work.
Attribution: "Photo by DAVID ILIFF.
License: CC BY-SA 3.0"
(Wikimedia Commons)
Remigius de Fécamp, the first Bishop of Lincoln, moved the Episcopal Seat (“Cathedra”) there "some time between 1072 and 1092".[6] About this, James Essex writes that "Remigius . . . laid the Foundations of his Cathedral in 1072" and "it is probable that he, being a Norman, employed Norman Masons to superintend the building . . . though he could not complete the whole before his death."[7] Before that, writes B. Winkles: "It is well known that Remigius appropriated the Parish Church of Saint Mary Magdalene in Lincoln, although it is not known what use he made of it."[8]

Up until then, Saint Mary's Church, in Stow, was considered to be the "Mother Church"[9] of Lincolnshire[10] (although it was not a Cathedral, because the Seat of the Diocese was at Dorchester Abbey, in Dorchester-on-Thames, Oxfordshire). However, Lincoln was more central to a Diocese that stretched from The River Thames to the Humber.
Remigius built the first Lincoln Cathedral on the present site, finishing it in 1092 and then dying on 7 May of that year,[12] two days before it was Consecrated. In 1124, the timber roofing was destroyed in a fire. Alexander (Bishop, 1123 – 1148) rebuilt and expanded the Cathedral, but it was mostly destroyed by an earthquake about forty years later, in 1185 (dated by the British Geological Survey as occurring 15 April 1185).[8][13] 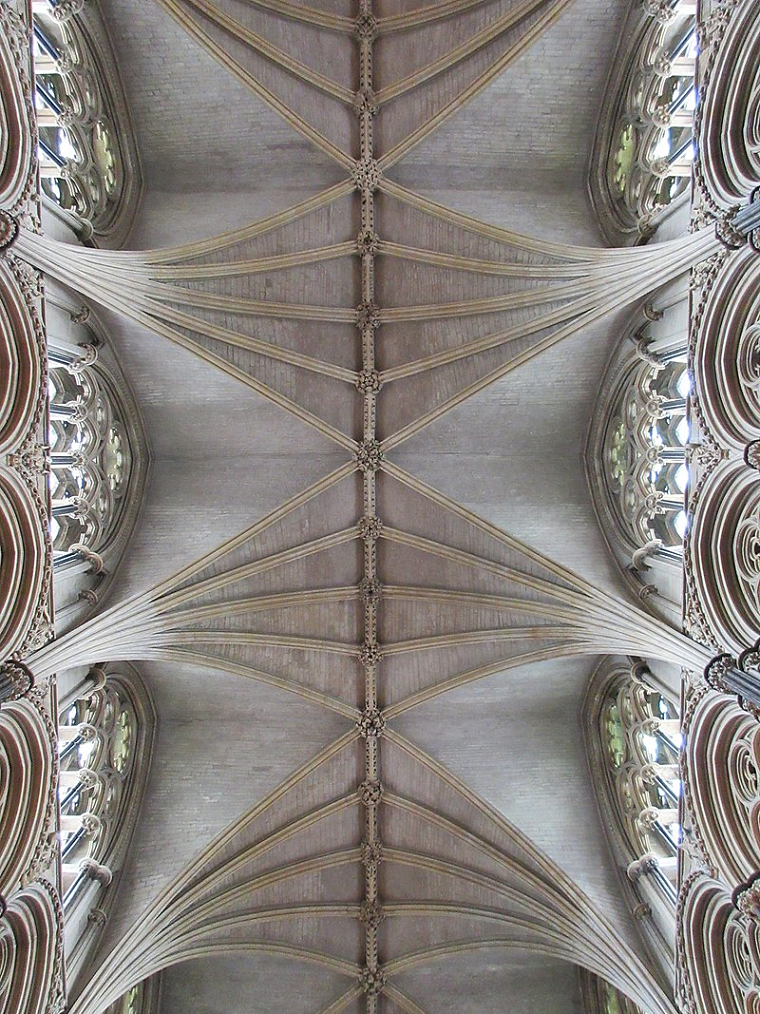 The earthquake was one of the largest felt in the UK: it has an estimated magnitude of over 5. The damage to the Cathedral is thought to have been very extensive; the Cathedral is described as having "split from top to bottom"; in the current building, only the lower part of The West End and its two attached Towers remain of the pre-earthquake Cathedral.[13]
Some (Kidson, 1986; Woo, 1991) have suggested that the damage to Lincoln Cathedral was probably exacerbated by poor construction or design, with the actual collapse most probably caused by a Vault failure.[13]

After the earthquake, a new Bishop was appointed. He was Hugh de Burgundy of Avalon, France, who became known as Saint Hugh of Lincoln. He began a massive rebuilding and expansion programme. With his appointment of William de Montibus as Master of the Cathedral School and Chancellor, Lincoln briefly became one of the leading educational centres in England, producing writers such as Samuel Presbiter and Richard of Wetheringsett, though it declined in importance after William's death in 1213.[14]
Rebuilding began with the Choir (Saint Hugh's Choir) and the Eastern Transepts between 1192 and 1210.[15] The Central Nave was then built in The Early-English Gothic Architectural Style. Lincoln Cathedral soon followed other architectural advances of the time – pointed Arches, Flying Buttresses, and Ribbed Vaulting, were added to the Cathedral. 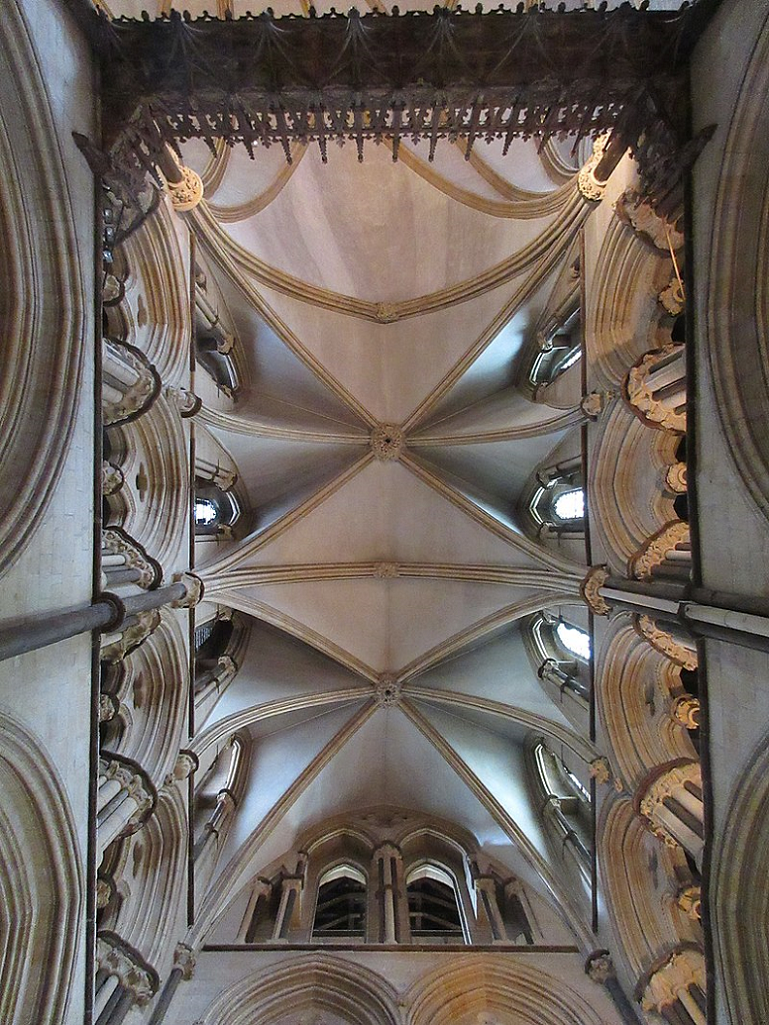 The Vaulted Ceiling of The Secondary Transept,
Lincoln Cathedral.
Photo: 15 September 2018.
Source: Own work.
Author: Cc364
(Wikimedia Commons)
This allowed support for incorporating larger Windows. There are thirteen Bells in The South-West Tower, two Bells in The North-West Tower, and five Bells in The Central Tower (including Great Tom). Accompanying the Cathedral's large Bell “Great Tom of Lincoln”, is a quarter-hour Striking Clock.
The Clock was installed in the Early-19th-Century.[16] The two large Stained-Glass Rose Windows, the matching Dean's Eye Window and the Bishop's Eye Window, were added to the Cathedral during the Late-Middle Ages. The former, the Dean's Eye Window, in The North Transept, dates from the 1192 rebuild begun by Saint Hugh, finally being completed in 1235.
The latter, the Bishop's Eye Window, in The South Transept, was reconstructed a hundred years later in 1330.[17] A contemporary record: “The Metrical Life of Saint Hugh”, refers to the meaning of these two Windows (one on the “dark” North Side and the other on the “light” South Side of the building).
"For North, represents the devil, and South, The Holy Spirit, and it is in these directions that the two eyes look. The Bishop faces the South in order to invite in, and the Dean, the North, in order to shun; the one takes care to be saved, the other takes care not to perish. With these Eyes, the Cathedral's face is on watch for the Candelabra of Heaven and the darkness of Lethe (oblivion)." 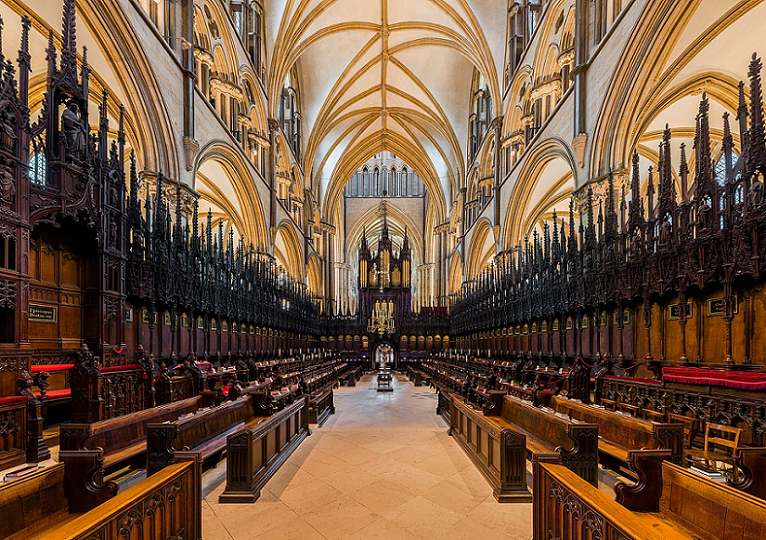 In 1290, Eleanor of Castile died and King Edward I of England decided to honour her, his Queen Consort, with an elegant Funeral Procession. After her body had been embalmed, which in the 13th Century involved evisceration, Eleanor's viscera were buried in Lincoln Cathedral and Edward placed a duplicate of the Westminster Abbey tomb there.
The Lincoln tomb's original Stone Chest survives; its effigy was destroyed in the 17th-Century and replaced with a 19th-Century copy. After the additions of the Dean's Eye and other major Gothic additions, it is believed some mistakes in the support of the Tower occurred, for, in 1237, the main Tower collapsed. 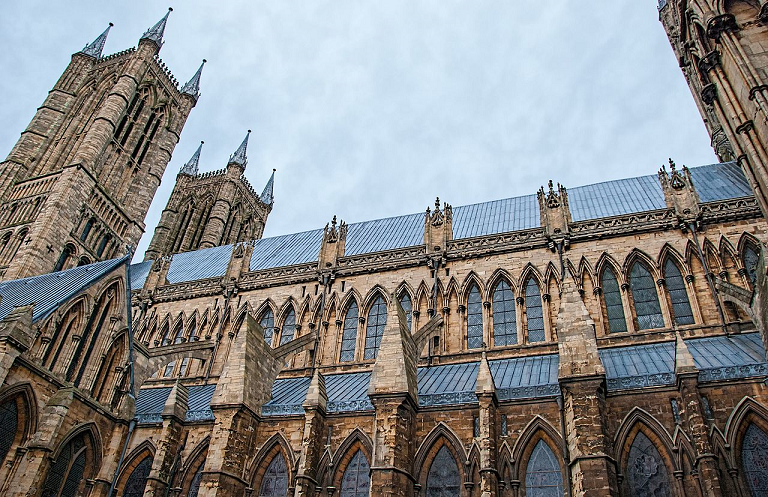 Lincoln Cathedral.
Photo: 7 November 2014.
Source: Lincoln cathedral
Author: Gary Ullah
(Wikimedia Commons)
A new Tower was soon started and in 1255 the Cathedral petitioned King Henry III to allow them to take down part of the Town Wall to enlarge and expand the Cathedral, including the rebuilding of the Central Tower and Spire. They replaced the small rounded Chapels (built at the time of Saint Hugh) with a larger East End to the Cathedral. This was to handle the increasing number of pilgrims to the Cathedral, who came to Worship at the Shrine of Saint Hugh of Lincoln.

Between 1307 and 1311, the Central Tower was raised to its present height of 271 feet (83 m). The Western Towers and the front of the Cathedral were also improved and heightened. At this time, a tall Lead-encased Wooden Spire topped the Central Tower, but was blown down in a storm in 1548. Hugh of Wells, Bishop of Lincoln, was one of the signatories to Magna Carta, and for hundreds of years the Cathedral held one of the four remaining copies of the original, now securely displayed in Lincoln Castle.[21]

There are three other surviving copies: Two at the British Library and one at Salisbury Cathedral.[23]

Maintaining the Cathedral costs £1.6 million a year.[35] A major renovation of The West Front was done in 2000. It was discovered that the Flying Buttresses on The East End were no longer connected to the adjoining stonework, and repairs were made to prevent collapse. 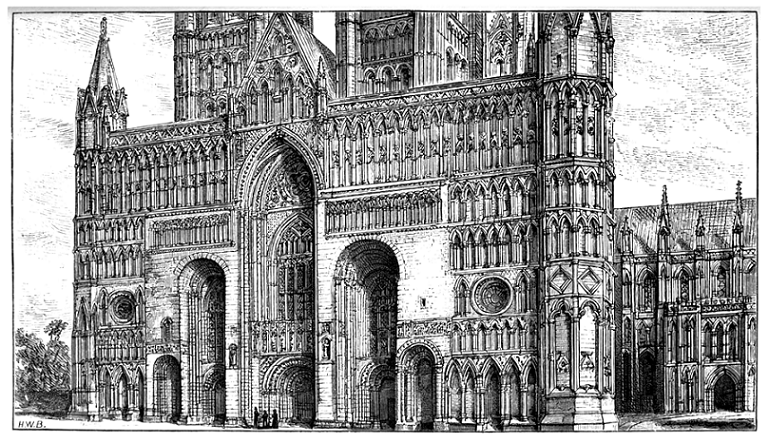 The Great West Door
and The West Façade of Lincoln Cathedral.
Date: 1890.
Source: https://archive.org/details/developmentchara00mooruoft
Author: Charles Herbert Moore.
(Wikimedia Commons)
It was next discovered that the stonework of the Dean's Eye Window, in The Transept, was crumbling, meaning that a complete reconstruction of the Window has had to be carried out according to the conservation criteria set out by the International Council on Monuments and Sites.
There was a period of great anxiety when it emerged that the stonework needed to shift only 5 mm (0.20 in) for the entire Window to collapse. Specialist engineers removed the Window's Tracery before installing a strengthened, more stable replacement. In addition to this the original Stained-Glass was cleaned and set behind a new clear isothermal glass, which offers better protection from the elements. By April 2006, the renovation project was completed at a cost of £2 million.
Lincoln Cathedral is one of the few English Cathedrals built from the rock it is standing on.[47] The Cathedral has owned the existing quarry, on Riseholme Road, Lincoln, since 1876.[48] This quarry is expected to run out of stone in 2021.[49] The Cathedral's Stone-Masons use more than 100 tonnes of stone per year for maintenance and repairs.[49]
Posted by Zephyrinus at 11:30:00