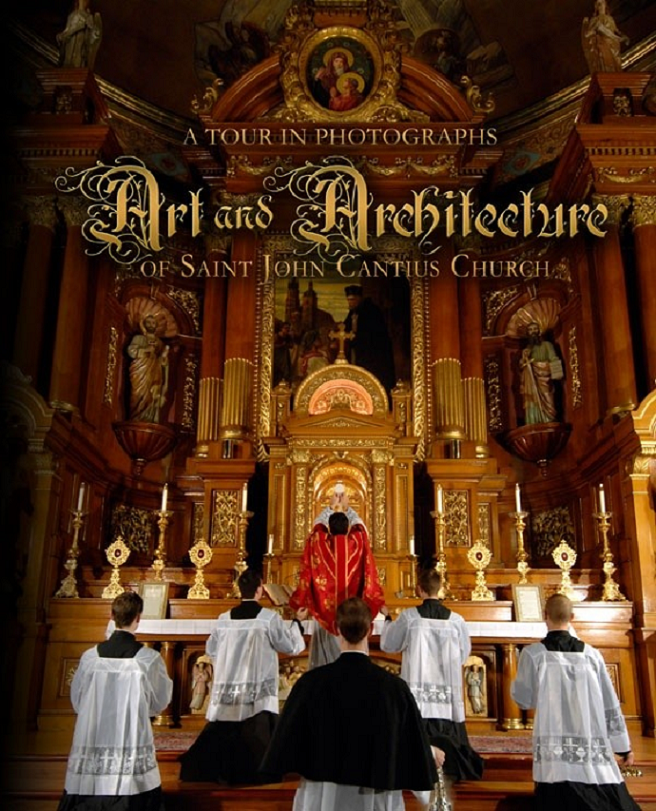 Happy Feast to all Readers and to The Parishioners and Clergy of Saint John Cantius Church, Chicago, United States of America.

Text from Wikipedia - the free encyclopædia,
unless otherwise stated. 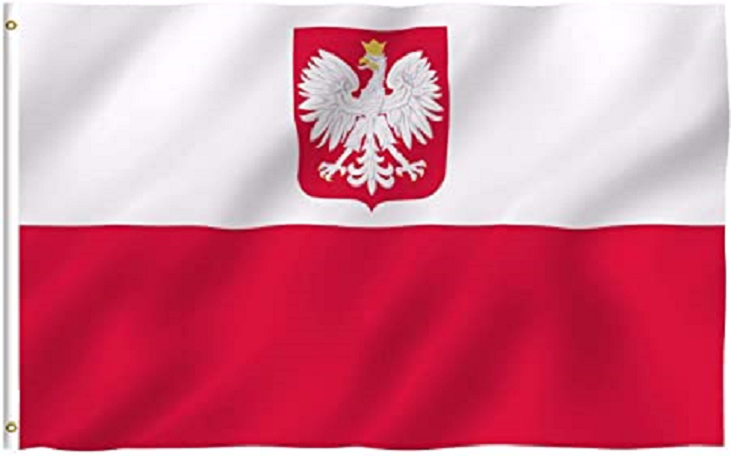 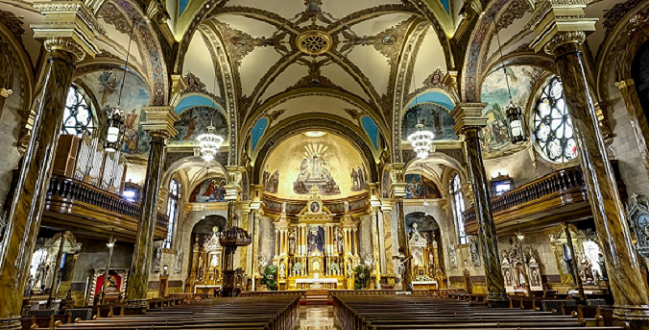 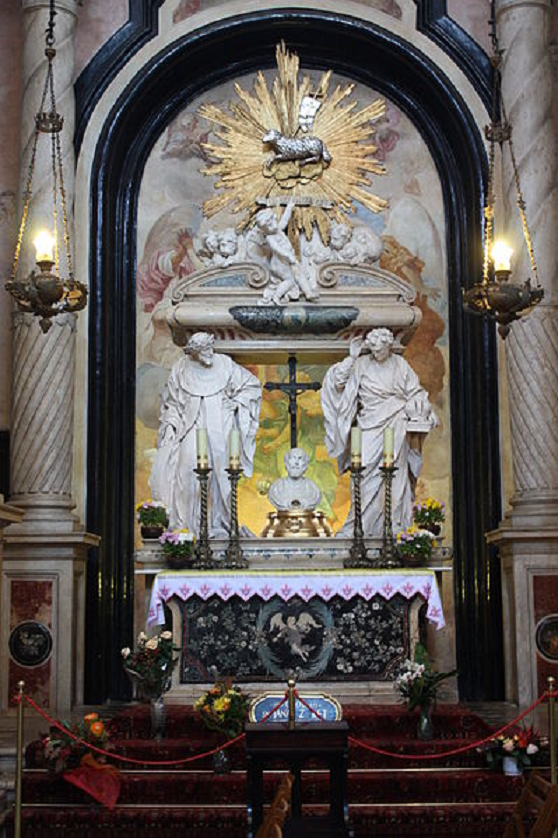 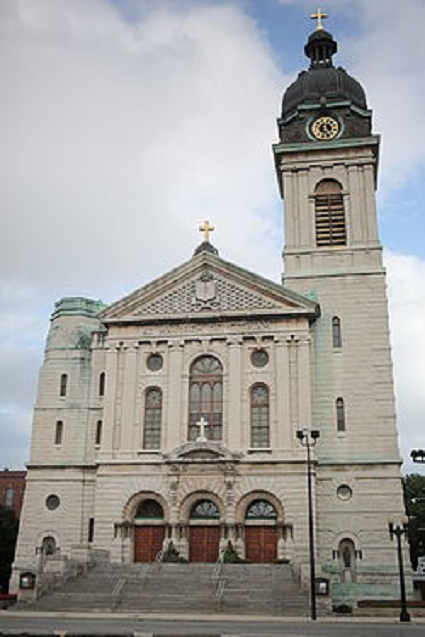 The Limestone facade of Saint John Cantius Church,
Chicago, United States of America.
Photo: 2 September 2013.
Source: Own work.
Author: Victorgrigas
(Wikimedia Commons)
Would you like to support this magnificent Church's revival
and its love for The Traditional Latin Mass ?
Why not visit this beautiful Church's Web-Site, and the Church Store, at
THE SAINT JOHN CANTIUS PARISH WEB-SITE

Saint John Cantius Parish (Polish: Parafia Świętego Jana Kantego) is an historic Church of the Roman Catholic Archdiocese of Chicago, known for its opulence and grand scale as well its Solemn Liturgies and rich programme of Sacred Art and Music.

Along with such monumental Religious edifices as Saint Mary of The Angels, Saint Hedwig's, or Saint Wenceslaus, it is one of the many Polish Churches that dominate over The Kennedy Expressway. 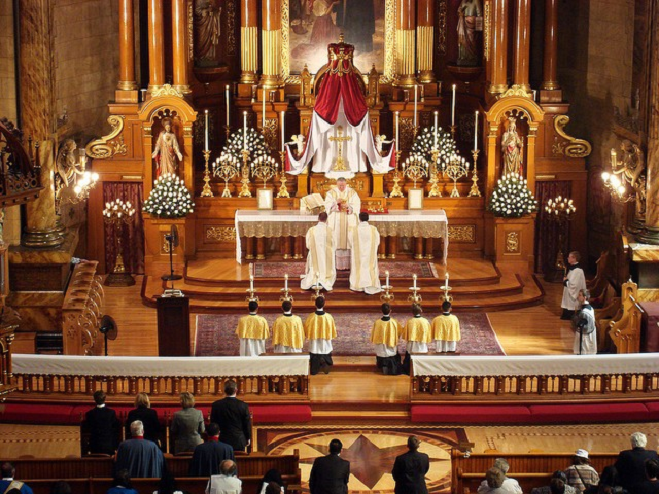 Solemn High Mass,
Saint John Cantius Church,
Chicago, United States of America.
www.flickr.com
The unique Baroque Interior has remained intact for more than a Century and is reminiscent of the sumptuous art and architecture of 18th-Century Krakow, Poland. Of all the “Polish Cathedral”-style Churches in Chicago, Saint John Cantius stands closest to Downtown. The imposing 130 ft. Tower is readily seen from the nearby Kennedy Expressway. Saint John's is particularly well-known for its programme of Solemn Liturgies and Devotions, Treasures of Sacred Art and Rich Liturgical Music.

In 2013, Saint John Cantius completed an ambitious Restoration, returning the lavish Interior to its original splendour. 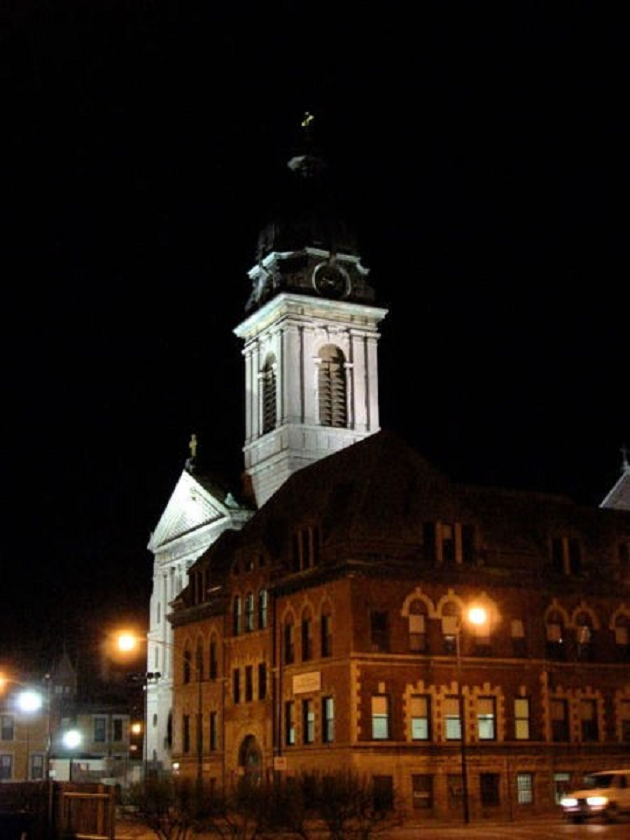 Saint John Cantius Church, near Chicago/Ogden/Milwaukee (and the Gonnella bakery). A Church, whose Parish was largely razed by highway construction. At Polonia's peak, before World War I, as many as 23,000 people would attend Sunday Mass here and doubtless similar numbers at five similarly-huge Churches within a mile. Now the Parish prospers by offering Mass to Suburbanites in Latin and Gregorian Chant.
Photo: 22 April 2005.
Source: Flickr
Author: Payton Chung from Chicago, USA
Reviewer: Fruggo
(Wikimedia Commons)

Saint John Cantius Church was designed by Adolphus Druiding and construction began in 1893. It was completed in 1898.

Saint John Cantius Church was founded in 1893, by The Congregation of The Resurrection, to relieve overcrowding at Saint Stanislaus Kostka, the City's first Polish Parish. The Parish retained its Polish character for years, but the building of the Kennedy Expressway, which cut through the heart of Chicago's Polonia, began a period of decline for the Parish, as many long-time residents were forced to relocate. 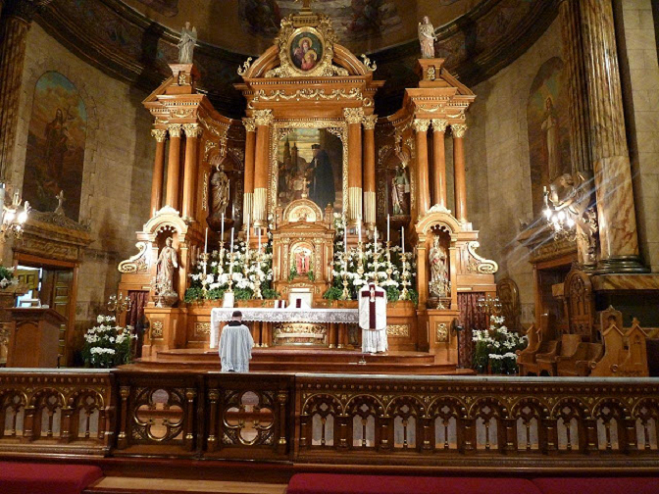 Holy Mass in the impressive Church of Saint John Cantius, Chicago.
Picture Credit: OFFERIMUS TIBI DOMINE
The Parish was slated for closure as Chicago's Inner City neighbourhoods declined further through the 1960s and 1970s. A revival of the Parish began in the Late-1980s, when the Parish became the focus of a renaissance of Traditional Catholic Rituals and Devotions that had fallen out of favour after The Second Vatican Council, such as The Tridentine Mass in Latin, as well as Vespers and Benediction, The Corpus Christi Procession, The Stations of The Cross, Tenebræ Services, and The Saint Joseph Novena and Saint Anne Novena.

Today, the Parish has a rich programme of Sacred Music, supported by seven Parish Choirs. The Parish is presently administered by The Canons Regular of Saint John Cantius, a Religious Community founded in the Parish in 1998.

Saint John Cantius Church has witnessed a number of famous visitors within its walls. In March 1989, the Parish hosted a visit by Tadeusz Mazowiecki, Prime Minister of the newly-Democratic Poland, while, in 1998, Józef Glemp, the Cardinal Primate of Poland, came to Celebrate a Mass of Thanksgiving and Bless the Church's new Copper Cupola. 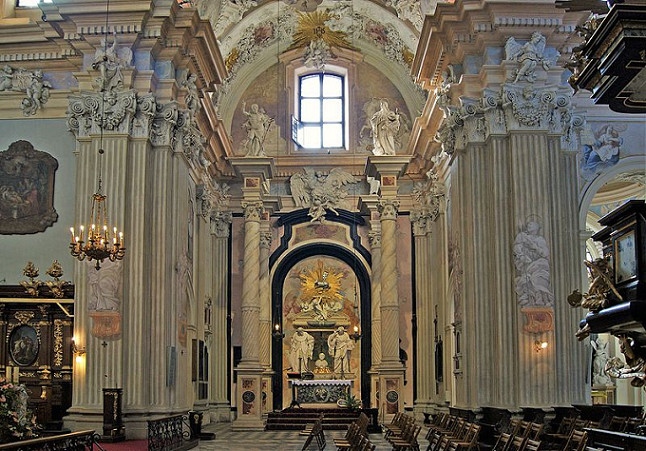 Saint John Cantius Church's majestic elegance has always drawn the attention of those who happened to pass by, making it an area landmark since its building, over a hundred years ago. Authors and filmmakers have seen it as natural to use the Church, both as a point-marking familiarity as well as from the purely aesthetic pleasure of its beauty. Some of the more notable examples are:

Saint John Cantius serves as the backdrop for Steffi Rostenkowski's great realisation in Nelson Algren's work "Never Come Morning", where, night after night, she heard the iron rocking of the Bells of Saint John Cantius. Each night, they came nearer, till the roar of The Loop was only a troubled whimper beneath the rocking of the Bells. "Everyone lives in the same big room", she would tell herself, as they rocked. "But nobody's speakin' to anyone else, an' nobody got a key". 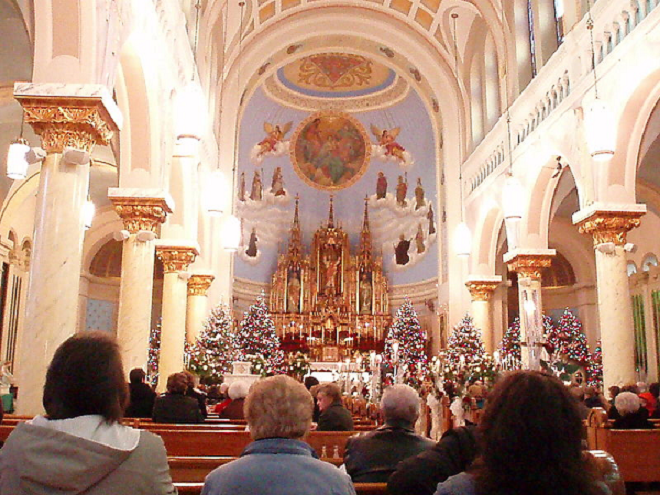 Saint John Cantius Church, Chicago, has also been featured in two films that were both shot in the Summer and Fall of 1990. The first was a made-for-television movie, entitled "Johnny Ryan". The second was a major Hollywood film, entitled "Only the Lonely", directed by John Hughes and starring Maureen O'Hara and John Candy.

The Church building's design is by Adolphus Druiding. Work began on this grandiose structure in the Spring of 1893 and was completed by 1898. The building has a façade of rusticated stone, in the High Renaissance Style, which dictated the use of classical elements, such as Columns, Capitals and Arches. At the very top, is a monumental Pediment, decorated with the Coat-of-Arms of Poland's failed January Uprising (1863-1864), under which is found the Polish inscription "Boże Zbaw Polskę" (God Save Poland). 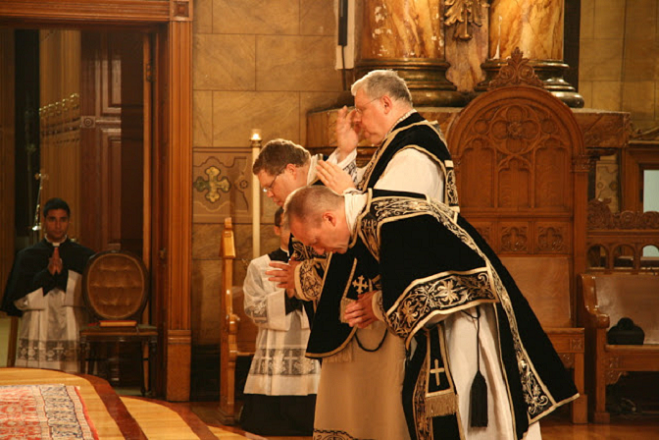 Just below this, on the Entablature, is the Latin inscription "Ad Maiorem Dei Gloriam", a text which proclaims that this building is for "The Greater Glory Of God", a Jesuit motto, popular in many Churches built around the start of the 20th-Century.

The Interior reflects the High Renaissance Style of the Exterior. Eight Stone Columns, with Corinthian Capitals, support the Vault. The present decoration is the result of several Interior decorations within the first forty years of completion. The Church's High Altar, as well as its matching two Side Altars, reputedly originate from the 1893 Columbian Exposition.

In 1903, the Interior was painted for the first time, and it was at this time that all the plaster and wood ornaments were added, and the Church received the character it has today. The Stained-Glass Windows were made by Gawin Co. of Milwaukee, while the Interior murals were painted by Lesiewicz, around 1920. In addition to religious scenes, such as The Resurrection under The High Altar, the artist decorated the side walls with paintings of Polish Patron Saints. 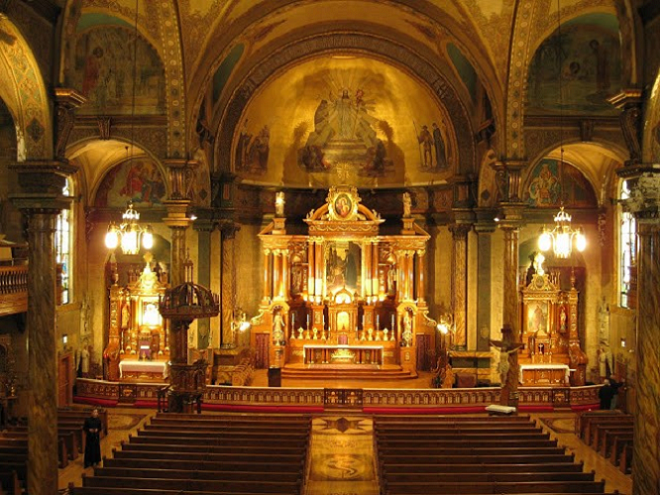 A new inlaid hardwood floor was installed in Saint John Cantius Church in 1997, to a design by Jed Gibbons. Sixteen varieties of wood from around the World were used for the inlaid medallions. The floor is not only a beautiful contemporary work of Sacred Art, but it is also designed as a teaching tool.

The medallions, inlaid into the main Aisle, tell the story of Salvation: Star of David - Jesus was born as a Jew; Three Crowns - with the arrival of The Three Kings, Jesus was made manifest to the World; Instruments of The Passion - Christ's suffering for our Salvation; Banner - The Resurrection; Star - Christ is The Light of the World. This floor, which is reputedly the only one of its kind in The United States, has already won three national awards.

In 2003, work was completed on a replica of The Veit Stoss Altar. Carved by artist Michael Batkiewicz over an eight-year period, this imposing one-third scale copy is the largest and most detailed work of its kind, and was commissioned as a tribute to the Galician immigrants who founded the Parish in 1893. 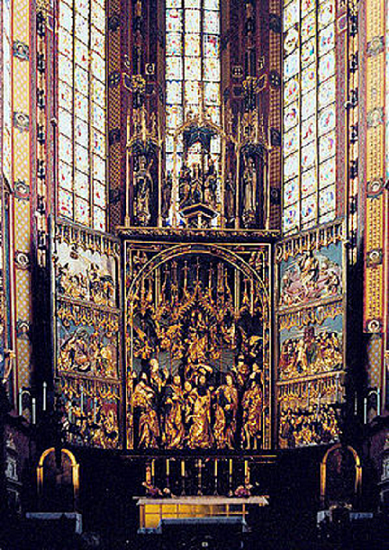 English: The Altarpiece of Veit Stoss (Polish: Ołtarz Wita Stwosza, German: Krakauer Hochaltar), also Saint Mary's Altar (Ołtarz Mariacki), is the largest Gothic Altarpiece in the World and a National Treasure of Poland.
It is located behind The High Altar of Saint Mary's Basilica, Cracow, Poland. The Altarpiece was carved between 1477 and 1489 by the German sculptor Veit Stoss (Wit Stwosz), who moved to the City
around that time and lived there for the next twenty years.
The Retable was paid for by the Townspeople of Cracow.
In 1941, during the German occupation, the dismantled Altar was shipped to The Third Reich, on the order of Hans Frank – the Governor-General
of that part of occupied Poland.
It was recovered in 1946, in Bavaria, South Germany,
hidden in the basement of the heavily-bombed Nuremberg Castle.
The High Altar underwent major restoration work in Poland and
was put back in its place at The Basilica ten years later.
Polski: Kraków, ołtarz Wita Stwosza.
Photo: June 2003.
Source: Own work.
Author: Pko
(Wikimedia Commons)

A permanent exhibit of Sacred Art, located in the Church's North Tower, is open on Sundays, as well as upon special request. The Collection's centerpiece is an elaborate Neapolitan "praesepio" (Italian creche) from Rome. Among Saint John Cantius's many other treasures are: A 19th-Century Copy of the icon of Our Lady of Częstochowa, adorned with jewelled Crowns, personally Blessed by Pope Saint John Paul II; a reproduction of the famous miraculous Crucifix from Limpus, Portugal; a 19th-Century Pietà from Bavaria, Germany; a hand-written Altar Missal; as well as several hundred authenticated Relics of Saints. 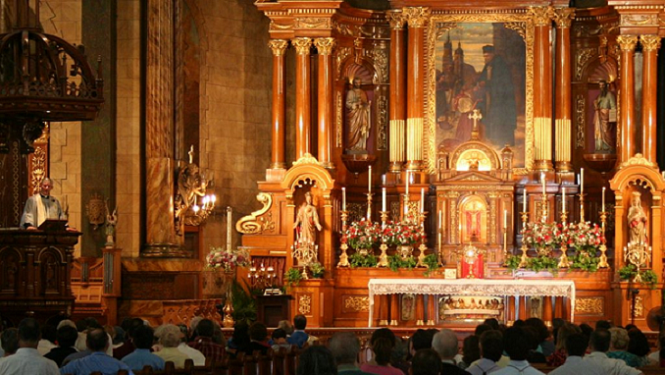 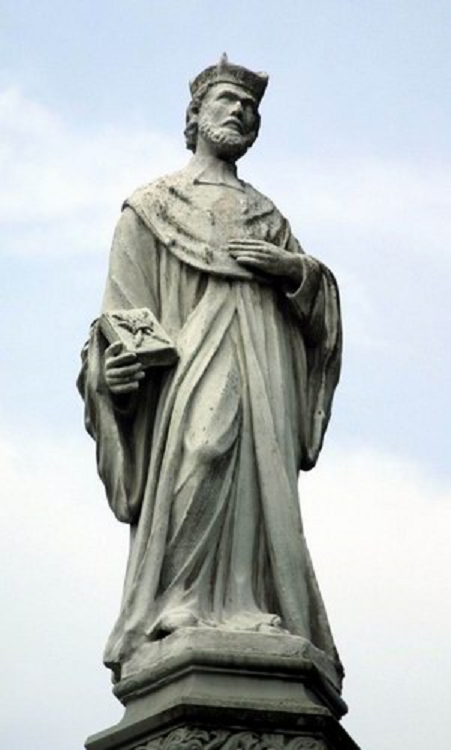 English: Saint John Cantius.
Polski: Saint Jan Kanty
Photo: 3 December 2004.
Source: Own work.
Author: mzopw
(Wikimedia Commons)
Born at Kenty, a Market Town in the Diocese of Cracow, Poland, Saint John was raised up by Providence to keep alight The Torch of Faith and The Flame of Christian Charity during the 15th-Century in Poland.

He obtained all the Academic Degrees at the University of Cracow, where he taught for several years. Ordained a Priest, he every day offered The Holy Sacrifice to appease Heavenly Justice, for he was deeply afflicted by the offences of men against God.

He shone especially by his exquisite Charity, which is shown in the Introit, the Collects, the Epistle, the Gradual, the Offertory and the Communion of his Mass. He took from his own food, to help those who were in need, and even gave them his clothes and shoes (Epistle); and he would let his cloak fall to the ground, so as not to be seen returning home bare-foot.

While on a Pilgrimage to Rome, he was robbed by brigands, and, when he declared that he had no other possessions, they allowed him to pursue his journey. The Saint, who had sewn some pieces of money into his cloak, suddenly remembered this, and, calling the thieves, he offered them the sum. But they, touched by his goodness and candour, gave him back all that they had taken.

Saint John Cantius died on Christmas Eve, 1473. He is especially invoked in cases of consumption.

["Owing to your Prayers, we see epidemics disappear, stubborn diseases averted, and The Blessing of Health restored. Those whom consumption, fever and ulcers condemn to a painful end are, by you, delivered from the embraces of death." (Hymn of Second Vespers)].