Text and illustrations from Wikipedia - the free encyclopedia,
unless otherwise stated. 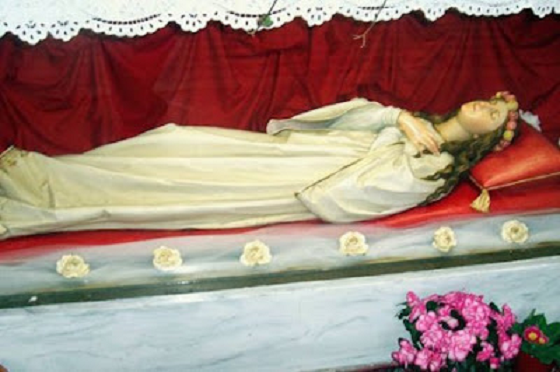 Saint Philomena is, as believed by her devotees within The Catholic Church, a young Virgin and Martyr whose remains were discovered in 1802 in The Catacombs of Priscilla. Three tiles enclosing the tomb bore an inscription that was taken to indicate that her name was (in the Latin of the inscription) Filumena, the English form of which is Philomena.

The remains were removed to Mugnano del Cardinale, in Campania, Italy, in 1805 and became the focus of widespread devotion, with several Miracles credited to the Saint's intercession, including the healing of Venerable Pauline Jaricot in 1835, which received wide publicity. Saint John Vianney attributed to her intercession the extraordinary cures that others attributed to himself.

In 1833, a Neapolitan Nun reported that, in a vision, Saint Philomena had revealed that she was a Greek Princess, Martyred at thirteen years of age by Diocletian, who was Roman Emperor from 284 A.D. to 305 A.D.

From 1837 to 1961, Celebration of her Liturgical Feast was approved for some places, but was never included in The General Roman Calendar for Universal Use. The 1920 Typical Edition of The Roman Missal included a mention of her, under 11 August, in the Section headed Missae pro aliquibus locis (Masses For Some Places), with an indication that The Mass to be used in those places was one from The Common of a Virgin Martyr, without any Collect, Proper to the Saint. 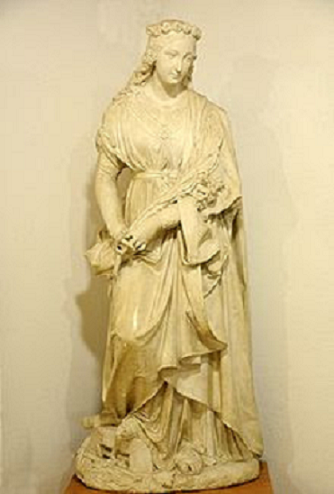 
The Shrine of her Relics, in Mugnano del Cardinale, continues to be visited by Pilgrims from many Countries, an Arch-Confraternity in her honour exists, as does popular Devotion in various places around the World.

On 24 May 1802, in The Catacombs of Priscilla, on The Via Salaria Nova, an inscribed Loculus (space hollowed out of the rock) was found, and, on the following day, it was carefully examined and opened. The Loculus was closed, with three Terra Cotta tiles, on which was the following inscription: Lumena paxte cumfi.

It was, and is, generally accepted that the tiles were in the wrong order and that the inscription originally read, with the Left-most tile placed on the Right: Pax tecum Filumena ("Peace with you, Philomena").

Within the Loculus was found the skeleton of a female between thirteen and fifteen years old. Embedded in the cement was a small glass phial with vestiges of what was taken to be blood. In accordance with the assumptions of the time, the Remains were taken to be those of a Virgin Martyr named Philomena. 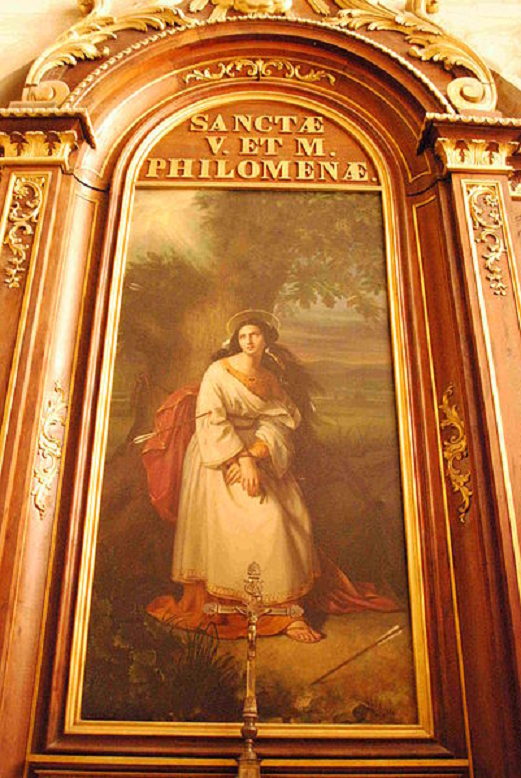 
In 1805, Canon Francesco De Lucia requested Relics for a new Altar, and, on 8 June 1805, obtained the Remains, discovered in May 1802 (reduced to dust and fragments), for his Church in Mugnano del Cardinale, Italy, where they arrived on 11 August 1805, after being taken from Rome to Naples on 1 July.

In 1827, Pope Leo XII gave to the Church in Mugnano del Cardinale the three inscribed Terra Cotta tiles that had been taken from the tomb.

In his Relazione istorica della traslazione del sagro corpo di s. Filomena da Roma a Mugnano del Cardinale, written in 1833, Canon De Lucia recounted that wonders accompanied the arrival of the Relics in his Church, among them a statue that sweated some liquid continuously for three days.

The spread of Devotion to Saint Philomena, in France, as well as in Italy, was helped when Saint John Vianney built a Shrine in her honour and referred to her often, attributing to her the Miracles that others attributed to himself. Another help was the cure of the near-dying Venerable Pauline Jaricot, founder of The Society for The Propagation of The Faith, at Philomena's Shrine on 10 August 1835.


Another Miracle, accepted as Proved in the same year, was the multiplication of the bone dust of the Saint, which provided for hundreds of reliquaries without the original amount experiencing any decrease in quantity.

Devotion includes the wearing of the "Cord of Philomena", a Red-and-White Cord, which had a number of Indulgences attached to it, including a Plenary Indulgence on the day on which The Cord was worn for the first time,

The Prayer suggestion for each is: “ Hail, O Holy Saint Philomena, whom I acknowledge, after Mary, as my advocate within The Divine Spouse, intercede for me now and at the hour of my death. ”

Devotionals are often given to young girls receiving their First Holy Communion or, on the thirteenth birthday, used primarily as a stepping-stone to practicing Devotionals such as The Holy Rosary. 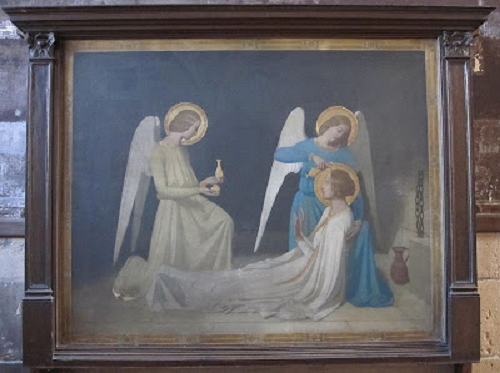 
On 21 December 1833, The Holy Office declared that there was nothing contrary to The Catholic Faith in the revelations that Sister Maria Luisa di Gesù (1799–1875), a Dominican Tertiary, from Naples, claimed to have received from the Saint.

According to Sister Maria Luisa di Gesù, Saint Philomena told her she was the daughter of a King in Greece who, with his wife, had converted to Christianity. At the age of about thirteen, she took a Vow of Consecrated Virginity. When The Emperor Diocletian threatened to make War on her father, her father went with his family to Rome to ask for Peace.

The Emperor fell in love with the young Philomena and, when she refused to be his wife, subjected her to a series of torments; scourging, from whose effects two Angels cured her; drowning, with an anchor attached to her (two Angels cut the rope and raised her to the River Bank); being shot with arrows, (on the first occasion her wounds were healed; on the second, the arrows turned aside; and on the third, they returned and killed six of the archers, after which, several of the others became Christians).

Finally, The Emperor had her decapitated. The story goes that the decapitation occurred on a Friday, at three in the afternoon, as with The Death of Jesus. The two anchors, three arrows, the palm and the ivy leaf on the tiles found in the tomb were interpreted as symbols of her Martyrdom.

In these Visions, Saint Philomena also revealed that her birthday was 10 January, that her Martyrdom occurred on 10 August (the date also of the arrival of her Relics in Mugnano del Cardinale), and that her name "Filumena" meant "Daughter of Light". (It is usually taken to be derived from a Greek word meaning "Beloved".) 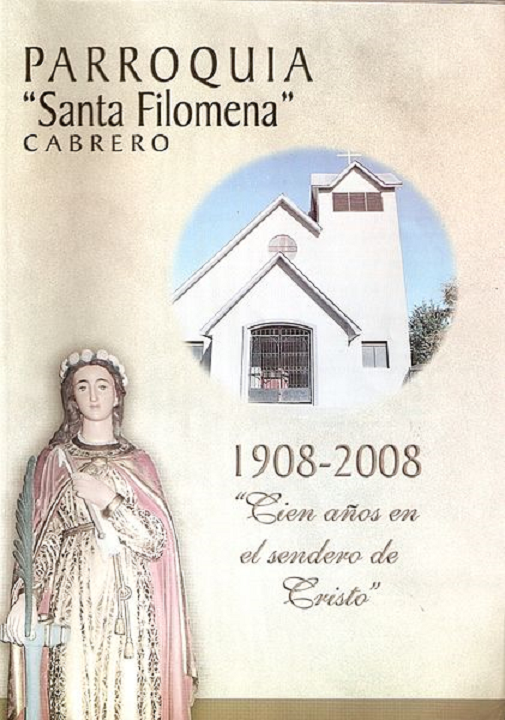 On 13 January 1837, in the aftermath of the cure of Venerable Pauline Jaricot, Pope Gregory XVI authorised Liturgical Celebration of Saint Philomena on 11 August or, according to another source, originally on 9 September, first in the Diocese of Nola (to which Mugnano del Cardinale belongs), and soon in several other Dioceses in Italy.

On 31 January 1855, Blessed Pope Pius IX approved a Proper Mass and Office, Dedicated to Saint Philomena, with confirmation of The Decree Etsi Decimo (Rescript of The Sacred Congregation of Rites, Papal Confirmation of Promotor of The Faith Brief Etsi decimo, as submitted by Rev. Andrea Fratini, 31 January 1855).

The name of Philomena was not included in The Roman Martyrology, the Official List of Saints recognised by The Catholic Church and in which The Saints are included, immediately upon Canonisation.

In The 1920 Typical Edition of The Roman Missal, Philomena is mentioned, under 11 August (with an indication that The Mass for her Feast Day was to be taken entirely from The Common, so that there was no part, not even The Collect, that was Proper to her) in the Section headed "Masses For Some Places", i.e. only those Places for which it had been specially authorised. 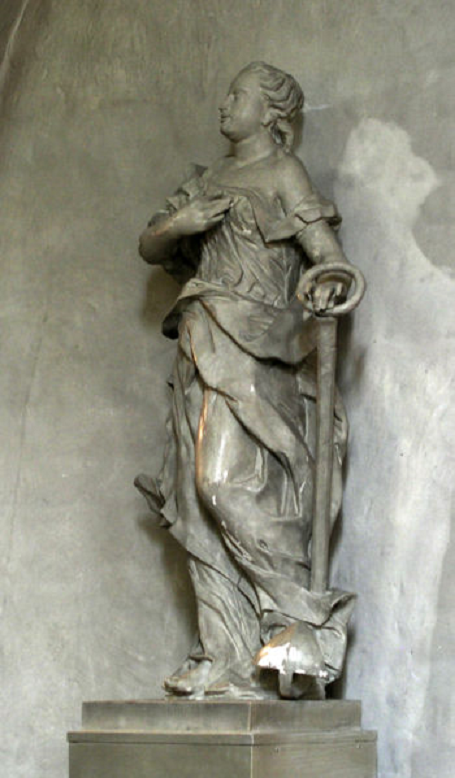 The Rector of the Shrine in Mugnano del Cardinale disputes these findings. After reporting the decision of The Sacred Congregation of Rites in 1961, as resulting from the studies of scholars, the Italian-language Enciclopedia dei Santi says that there still remain the Miracles that occurred and the official recognition that The Church gave in the 19th-Century, the personal Devotion to Saint Philomena of Popes and people who were later Canonised, and the widespread general Devotion that still persists, particularly at Mugnano del Cardinale in the Diocese of Nola, where Pilgrims from all over the World arrive, continually, giving a display of intense popular Devotion.

The Web-Site of "The National Shrine of Saint Philomena, Miami, Florida" sees "the action taken in 1960 as the work of the devil in order to deprive The People of God of a most powerful Intercessor, particularly in the areas of Purity and Faith at a time when these virtues were so much being challenged as they continue to be up until now ! " 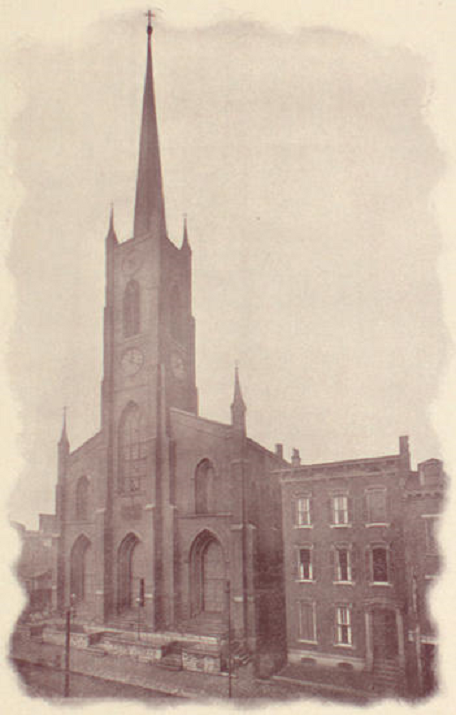 Saint Philomena's Church,
Cincinnati, Ohio, United States of America.
Because of the Church's location near the riverfront,
Saint Philomena's Steeple was a well-known landmark on the Cincinnati skyline.
On 7 July 1915, a Tornado damaged the Steeple.
The Parish was closed in 1954.
(Wikipedia).


In his book, "It Is Time to Meet Saint Philomena", Mark Miravalle says that Pope Gregory XVI "Liturgically Canonised Philomena, in an act of the ordinary Papal Magisterium". This contrasts with the usual view that Canonisation is an exercise of infallible Magisterium, declaring a Truth that must be "definitively held".

Of course, lack of Canonisation does not mean lack of Sainthood. Canonisation was introduced only after many Centuries of The Church's existence, and, for that reason, none of the Saints mentioned in The Roman Rite Canon of The Mass was ever Canonised.

Supplement for The Dioceses of The United States of America.

IN THE DIOCESE OF HELENA.

The Sacred body of Saint Philomena, a Virgin-Martyr of The First Ages of Christianity, was, early in the 19th-Century, discovered in the Roman Catacomb, known as The Cemetery of Priscilla.

An Inscription and Phial of Blood bore witness to the genuineness of the Relics. The many Miracles since wrought by Almighty God, in favour of those who have Invoked Saint Philomena, have caused her cultus to become widespread in The Church.

The Liturgical Celebration of her Feast was Authorised by Pope Gregory XVI.