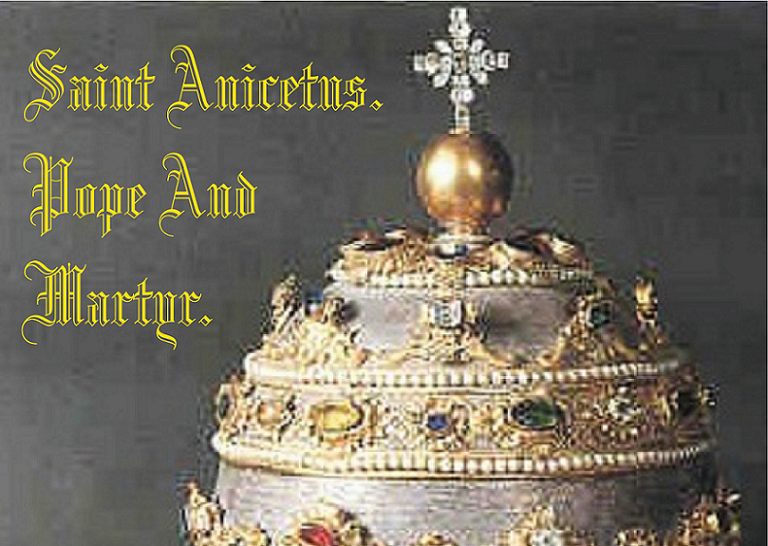 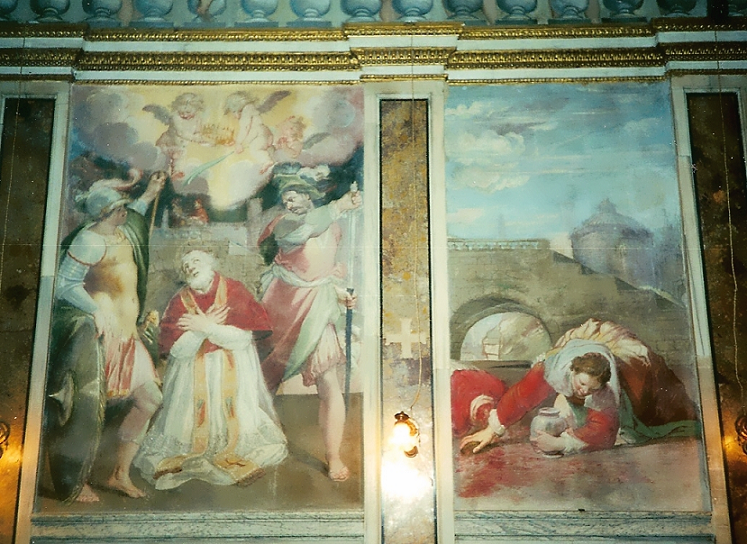 The Martyrdom of Pope Anicetus.
Frescoes by Antonio Circignani, called Pomarancio.
Chapel of Sant'Aniceto e Beata Vergine della Clemenza,
Palazzo Altemps, Roma.
Date: 20 April 2001.
Source: Own work.
Author: Torvindus
(Wikimedia Commons)
The Paschal Cycle surrounds The King of Martyrs, Whose triumph it celebrates, with a bevy of Saints who "followed Him bearing their Crosses and who, having lost their lives for His sake," found the life of which Jesus, Risen Again, is the model (Gospel).

Saint Anicetus, Invested with full Sacerdotal power (Introit), succeeded Pope Saint Pius I as Pope. He governed The Church from 150 A.D. to his death in 168 A.D. and took such a part in The Sufferings of Christ (Epistle) that, although he did not shed his blood for The Faith, he was given the Title of Martyr.

He preserved his flock from the heresies of Valentinus and Marcion and "filled with The Consolations of Jesus, he was enabled, in turn, to console those who suffered" (Epistle). The great Saint Polycarp came to him at Rome to confer especially about the date of the Celebration of Easter, for, by the coincidence of this Feast with that of the Jews, it was right to claim that the Mysteries of The Death and Resurrection of Jesus had realised, and taken the place of, the immolation of the Jewish paschal lamb.

"Let us rejoice for the annual Solemnity of Blessed Anicetus" (Collect). This Feast reminds us of the date when, after having died with Christ on Earth, this Holy Martyr went to share The Glory of His Resurrection in Heaven.