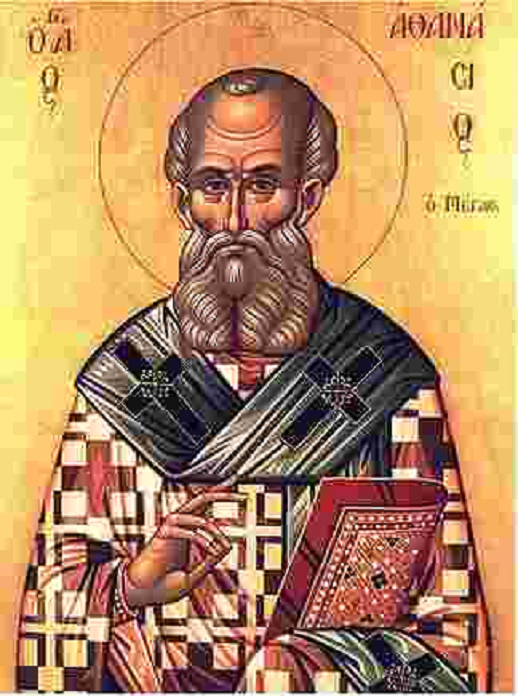 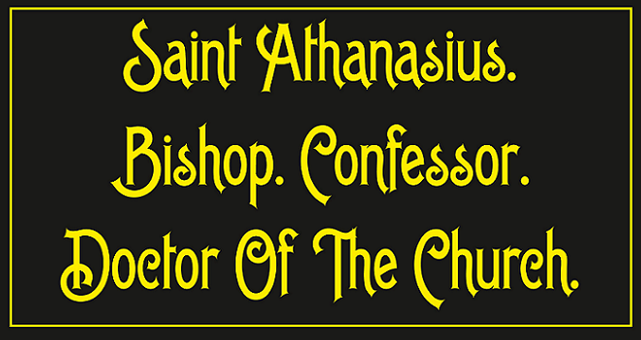 Saint Athanasius.
Available on YouTube at
YOU TUBE
Saint Athanasius, also known as Athanasius The Great and Athanasius The Confessor, was a Bishop and Doctor of The church. He is called the "Father of Orthodoxy," the "Pillar of The Church" and "Champion of Christ's Divinity."
Athanasius became Bishop, and Alexander of Alexandria’s Secretary, in 318 A.D., after being ordained a Deacon. Around 323 A.D., Arius, an ambitious Priest of The Alexandrian Church, denied The Divinity of Christ, and began spreading word that Jesus Christ was not truly Divine.

Athanasius was present during the great Church debate and stood alongside Alexander of Alexandria during the famous Council of Nicaea, where The Nicene Creed was adopted as The Creed of The Church. Five months later, Alexander died and Athanasius succeeded him after being unanimously elected. He was Consecrated as the new Bishop of Alexandria in 328 A.D., and continued the fight against Arianism. 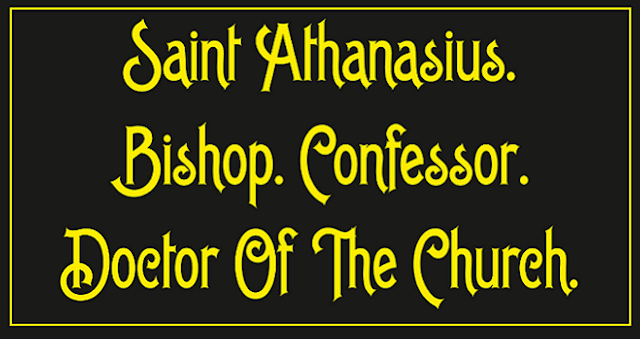 Efforts to get Athanasius impeached began, and he was charged with various crimes. Even though he proved his innocence, Emperor Constantine commanded Athanasius to go to The Council of Tyre in 335 A.D. Athanasius was exiled for the first time. After returning to Alexandria, two and a half years later, his enemies continued to try to exile him. He was completely vindicated by a Synod called by Pope Julius I, but was unable to return home to Alexandria until the death of the new Cappadocian in 345 A.D. 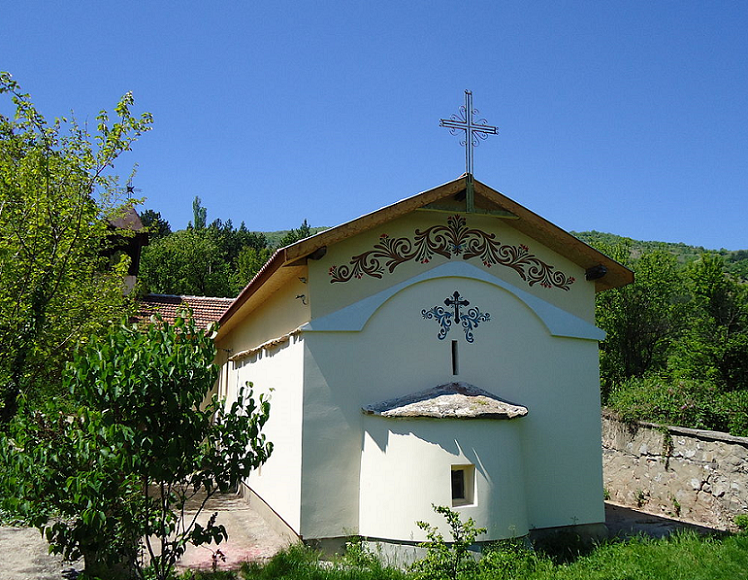 English: Church of Saint Athanasius, Boboshevo, Bulgaria.
Български: Късносредновековна църква "Свети Атанасий" - гр.Бобошево.
Photo: 1 May 2010.
Source: Own work.
Author: LeeKeoma
(Wikimedia Commons)
In 353 A.D., Athanasius faced more condemnations by the Arians in the Councils at Arles, France, and again in 355 A.D., in Milan, Italy. The persecutions escalated to physical attacks until Athanasius escaped and hid in the desert with a group of Monks for six years. After returning to Alexandria in 361 A.D., he was exiled two more times until Emperor Valens permanently restored him in 364 A.D. Over the course of his life, Athanasius was banished five times and spent seventeen years of his life in exile for the defence of The Doctrine of Christ's Divinity.

He died on 2 May 373 A.D., in Alexandria, Egypt. He is a Patron Saint of Theologians, and Faithful Orthodox and Roman Catholic Christians. To this day, Athanasius is hailed as a great Defender of The Faith. His Feast Day is Celebrated on 2 May.

The Church, still covered with the blood of her Martyrs, had, in the 5th-Century A.D., to sustain the dreadful assaults of heretics. Arius dared to despoil The Divine Redeemer of all His Glory as Son of God; to make of Him a simple creature only higher in Grace than others.
God then raised up Saint Athanasius: "He fills him with the Spirit of Wisdom" (Introit), and "anoints him as Bishop of Alexandria, with His Holy Oil" (Offertory), for, as an athlete off Christ, he had to Preach The Master's Truth, at the price of innumerable sacrifices (Epistle, Gospel).

In 325 A.D., Saint Athanasius was the herald of the illustrious assembly of the 318 Bishops who condemned Arius at The Council of Nices, proclaiming that Jesus was The Son consubstantial with The Father. That is why he is often represented with a symbol of The Trinity as an emblem.

He died in 373 A.D., and was proclaimed Doctor of The Church.
Let us, like Saint Athanasius, affirm The Divinity of Jesus Risen Again.
Mass: In médio Ecclésiae.
Credo: Is said.

The Court of our Divine King, during this grandest of Seasons, is brilliant beyond measure; and, today, it is gladdened by the arrival of one of the most glorious champions that ever fought for His Holy Cause.

Among the guardians of The Word of Truth, confided by Jesus to the Earth, is there one more faithful than Athanasius ? Does not his very name remind us of dauntless courage in the defence of The Sacred Deposit, of heroic firmness and patience in suffering, of learning, of talent, of eloquence — in a word, of everything that goes to form a Saint, a Bishop, and a Doctor of The Church ?

Never did our Holy Faith go through a greater ordeal than in the sad times immediately following The Peace of The Church, when the Barque of Saint Peter had to pass through the most furious storm that Hell has, so far, let loose against her.

Satan had vainly sought to drown The Christian Race in a sea of blood; The Sword of Persecution had grown blunt in the hands of Emperor Diocletian and Emperor Galerius; and The Cross appeared in the heavens, proclaiming The Triumph of Christianity.

Scarcely had The Church become aware of her victory, when she felt herself shaken to her very foundation. Hell sent upon the Earth a Heresy which threatened to blight the fruit of three hundred years of Martyrdom. Arius began his impious doctrine, that He, Who had, hitherto, been Adored as The Son of God, was only a creature, though the most perfect of all creatures. Immense was the number, even of the Clergy, that fell into this new error; the Emperors became abettors; and, had not God, Himself, interposed, men would soon have set up the cry throughout the World that the only result of the victory gained by The Christian Religion was to change the object of idolatry, and put a new idol, called Jesus, in place of the old ones.

But He, Who had promised the The Gates of Hell should never prevail against His Church, faithfully fulfilled His Promise. The primitive Faith triumphed; The Council of Nicæa proclaimed The Son to be Consubstantial with The Father; but The Church stood in need of a man in whom the cause of the Consubstantial Word should be, so to speak, incarnated — a man with learning enough to foil the artifices of Heresy, and with courage enough to bear every persecution without flinching.

This man was Athanasius: And everyone that Adores and Loves The Son of God, should love and honour Athanasius. Five times banished from his See of Alexandria by The Arians, who even sought to put him to death, he fled for protection to The West, which justly appreciated the glorious Confessor of Jesus' Divinity.

In return for the hospitality accorded him by Rome, Athanasius gave her of his treasures. Being the admirer and friend of the great Saint Antony, he was a fervent admirer of The Monastic Life, which, by The Grace of The Holy Ghost, had flourished so wonderfully in the deserts of his vast Patriarchate.

He brought the precious seed to Rome, and the first Monks seen there were the ones introduced by Athanasius. The heavenly plant became naturalised in its new soil; and, though its growth was slow at first, it, afterwards, produced fruit more abundantly than it had ever done in The East.
Posted by Zephyrinus at 00:00:00

Email ThisBlogThis!Share to TwitterShare to FacebookShare to Pinterest
Labels: Saint Athanasius. Bishop. Confessor. Doctor Of The Church. Feast Day 2 May.