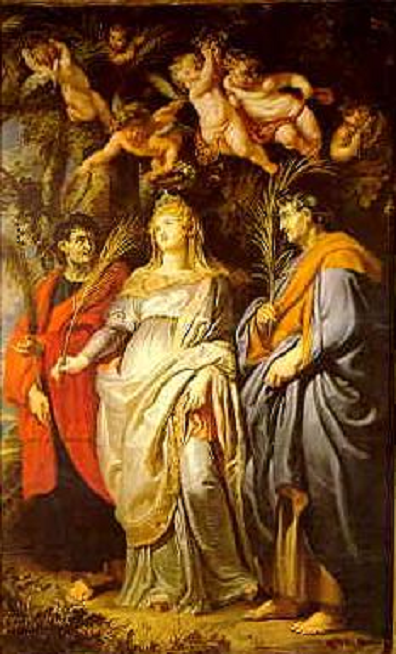 Saint Domitilla, with Saints Nereus and Achilleus.
Artist: Peter Paul Rubens (1577–1640).
Date: 1608.
Current location: Santa Maria-in-Vallicella, Rome.
Source: http://saints.bestlatin.net/gallery/nerach_rubens.htm
(Wikimedia Commons)
Nereus and Achilleus, Officers of the household of Flavia Domitilla, a niece of the Emperors Titus and Domitian, were Baptised by Saint Peter. The Gospel praises their Faith when it praises that of the Officer who obtained the cure of his son and believed in Jesus.

These Saints, having inspired Domitilla with the resolution to consecrate her Virginity to God, Aurelianus, her betrothed, accused them, all three, of being Christians. Out of hatred for Christ, they were put to death under the Emperor Trajan, at Terracina, about 100 A.D.

Saint Pancras was arrested in Rome at the age of fourteen and put to death towards 275 A.D., under Emperor Diocletian, for having refused to sacrifice to the Roman gods. His constancy earned him a place among The Saints, whose joy he shares (Epistle, Communion).