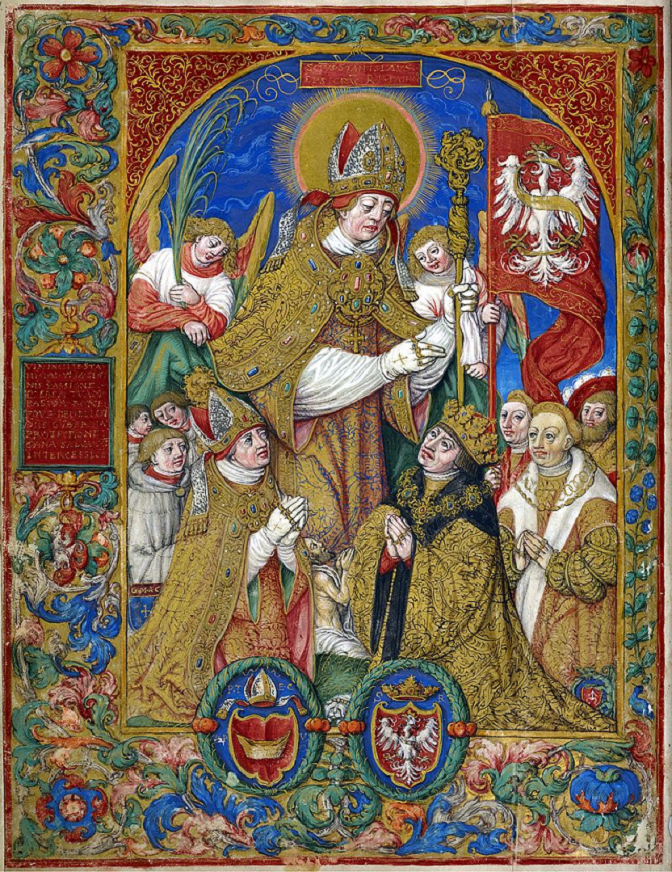 Saint Stanislaus.
Artist: Stanisław Samostrzelnik (1490–1541).
Date: 1530-1535.
Collection: National Library of Poland
Source/Photographer: Polona.pl
(Wikimedia Commons)
Saint Stanislaus, born in Poland, was made Bishop of Cracow in 1072. He became an object of hatred to King Boleslas II, whom he reproached for his tyranny and dissolute life.

One day, while the Saint was saying Mass, the King rushed at him and slew him (Collect). This was in 1079.

Saint Stanislaus is the Patron Saint of Poland. 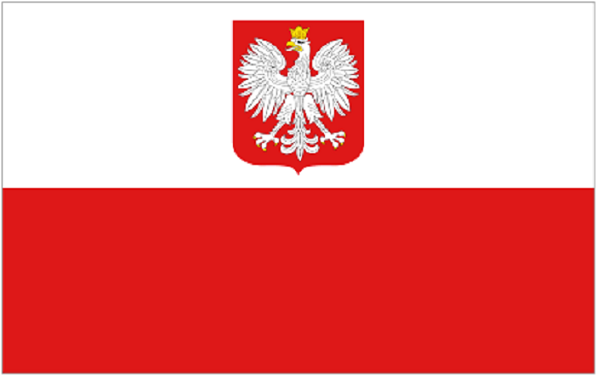 The State Flag and Civil Ensign of Poland.
Saint Stanislaus is The Patron Saint of Poland.
Illustration: WORLD FLAG DATABASE
The following Text is from Wikipedia - the free encyclopædia.

Stanislaus of Szczepanów, or Stanisław Szczepanowski, (26 July 1030 – 11 April 1079), was a Bishop of Kraków known chiefly for having been Martyred by the Polish King, Bolesław II The Bold.

Stanislaus is Venerated in The Roman Catholic Church as Saint Stanislaus The Martyr (as distinct from the 16th-Century Jesuit, Stanislaus Kostka).

According to Tradition, Stanisław was born at Szczepanów, a village in Lesser Poland, the only son of the noble and pious Wielisław and Bogna. He was educated at a Cathedral School in Gniezno (then the Capital of Poland) and later, according to different sources, in Paris or Liège. On his return to Poland, Stanisław was ordained a Priest by Lambert II Suła, Bishop of Kraków. He was subsequently made Pastor of Czembocz, near Cracow, Canon and Preacher at the Cathedral, and, later, Vicar-General.

After the Bishop's death (1072), Stanisław was Elected his successor, but accepted the Office only at the explicit command of Pope Alexander II. Stanisław was one of the earliest native Polish Bishops. He also became a Ducal Advisor and had some influence on Polish politics.

Stanisław's accomplishments included bringing Papal Legates to Poland, and the re-establishment of a Metropolitan See in Gniezno. The latter was a precondition for Duke Bolesław's Coronation as King, which took place in 1076. Stanisław then encouraged King Bolesław to establish Benedictine Monasteries to aid in the Christianisation of Poland.
Posted by Zephyrinus at 00:00:00