Text is taken from The Saint Andrew Daily Missal,
unless otherwise stated. 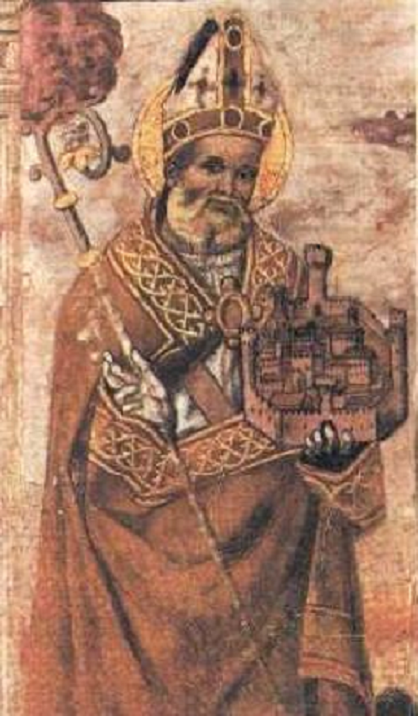 The Race Of The Ceri.
La Calata, Gubbio, Italy.
Available on YouTube at
YOU TUBE
Saint Ubaldus, born at Gubbio, Umbria, Italy, received Episcopal Consecration (Introit, Epistle, Alleluia) and was obliged, by Pope Honorius II, to take the government of that Church (Communion).

After having, under the guidance of The Holy Ghost, by his Charity and Apostolic zeal, put to full advantage the talents which God had entrusted to him, he piously fell asleep and "entered into the joy of his Lord" (Gospel) on Whit-Sunday evening.

He died in 1160 and his body has remained intact up to our time. Let us ask this Saint, to whom God gave special power against Satan, to preserve us from all the malice of the devil (Collect). 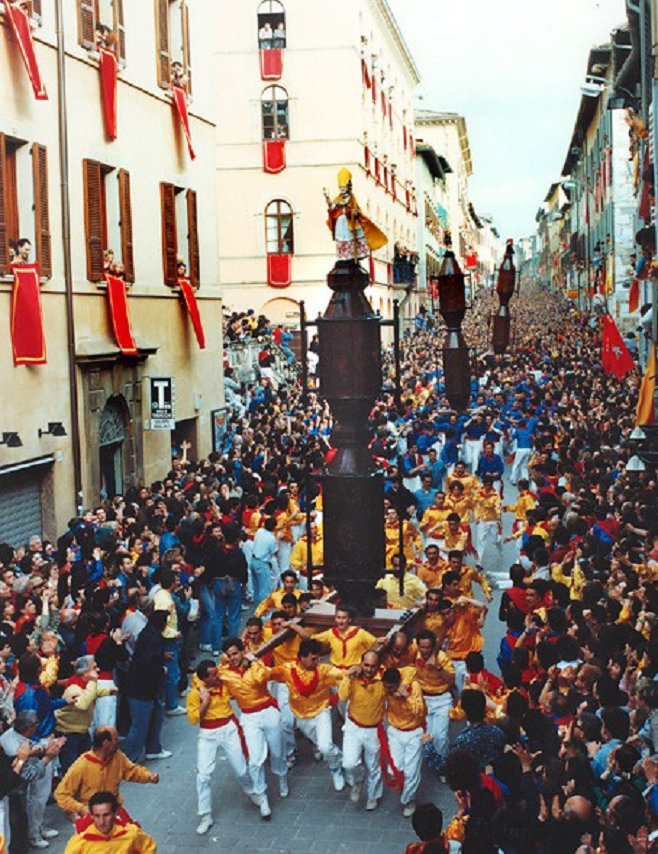 The Festival of La Corsa dei Ceri, at Gubbio, Italy.
The statue of Saint Ubaldo leads the Procession, followed by Ceri,
topped with the statues of Saint George and Saint Anthony the Great.
Date: 2000.
This File: 29 April 2006.
User: Starlight
(Wikimedia Commons)

The Basilica is the finishing-point for the annual Saint Ubaldo Day Procession on 15 May (in Italian, La Corsa dei Ceri). The Procession includes a race between three teams of men, each representing one of the Town's three Guilds:

The participants dress in colourful "Ceraioli" and carry three, nearly-900-pound, wooden stands and statues (Ceri) of their Saints through the City to the City Gates. Thereafter, the teams sprint up Mount Ingino to the Basilica, where the statues remain until the following May. A similar Festival is celebrated in Jessup, Pennsylvania, United States of America. The event is considered an important contribution to the Town's tourism industry. 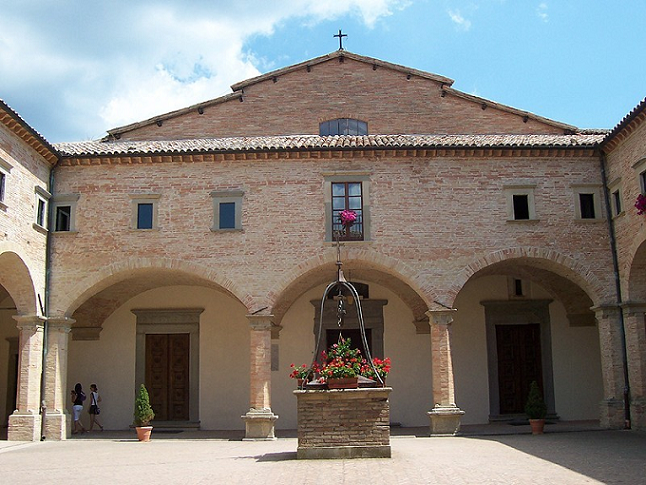 Ubaldo of Gubbio (Italian: Ubaldo; Latin: Ubaldus; French: Ubalde; circa 1084–1160) was a Mediæval Bishop of Gubbio, in Umbria, today Venerated as a Saint by The Catholic Church. Saint Ubaldo Day is still Celebrated at the Basilica of Sant'Ubaldo, in Gubbio, in his honour, as well as at Jessup, Pennsylvania.

Born Ubaldo Baldassini, of noble parents, at Gubbio, Italy, Ubaldo lost his father while still very young. He was educated by the Prior of the Cathedral Church of his native City, where he also became a Canon Regular. Saint Sperandia was a relative of Ubaldo.

He felt a Vocation to become a Monk, and entered the Monastery of Saint Secondo in the same City, where he remained for some years. Recalled by his Bishop, he returned to the Cathedral Monastery, where he was made Prior. Having heard that, at Vienna, Blessed Peter de Honestis, some years before, had established a very fervent Community of Canons Regular, to whom he had given special statutes which had been approved by Pope Paschal II, Ubaldo went there, remaining with his Brother Canons for three months, to learn the details and the practice of their rules, wishing to introduce them among his own Canons of Gubbio. 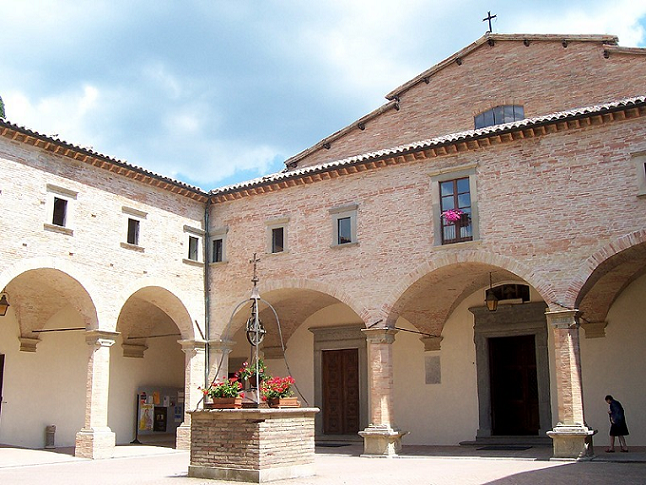 This he did at his return. He earned a reputation for piety, poverty (for all his rich patrimony, he had given to The Poor and to the restoration of Monasteries), humility, mortification, meekness, and fervour, and the fame of his Holiness spread in the Country, and several Bishoprics were offered to him, but he refused them all.

Ubaldo is said to have prevented Frederick Barbarossa from sacking Gubbio, as the Emperor had sacked Spoleto in 1155.

However, the Episcopal See of Gubbio becoming vacant, he was sent, with some Clerics, by the population to ask for a new Bishop from Pope Honorius II, who, having Consecrated him, sent him back to Gubbio. To his people, he became a perfect pattern of all Christian virtues, and a powerful protector in all their Spiritual and Temporal needs.

He died after a long and painful illness of two years. 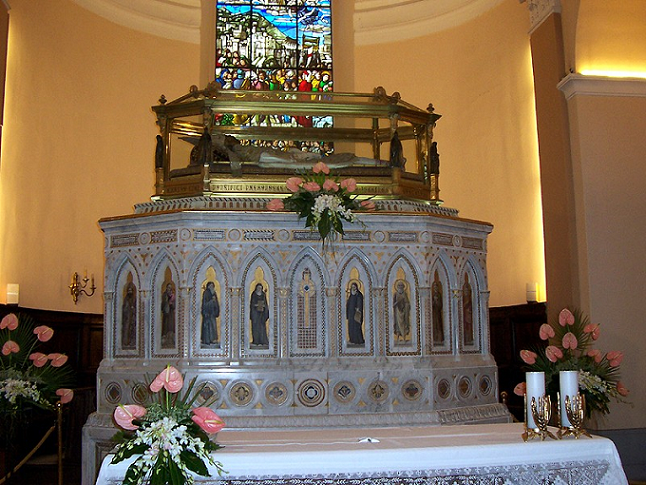 Numerous Miracles were attributed to him during his life and after his death. At the solicitation of Bishop Bentivoglio, Pope Celestine III Canonised him in 1192. His power, as we read in The Office for his Feast, is chiefly manifested over the evil spirits, and The Faithful are instructed to have recourse to him "contra omnes diabolicas nequitias".

The Life of the Saint was written by Blessed Theobaldus (Theobald, Teobaldo), his immediate successor in the Episcopal See, and, from this source, is derived all the information given by his numerous biographers. The body of Ubaldo, which had at first been buried in the Cathedral Church by the Bishops of Perugia and Cagli, at the time of his Canonisation was found flexible and incorrupt, and was then placed in a small Oratory on the top of the hill overlooking the City, where, in 1508, at the wish of the Duke of Urbino, The Canons Regular built a Church, frequented by numerous Pilgrims, who come to visit the Relics. 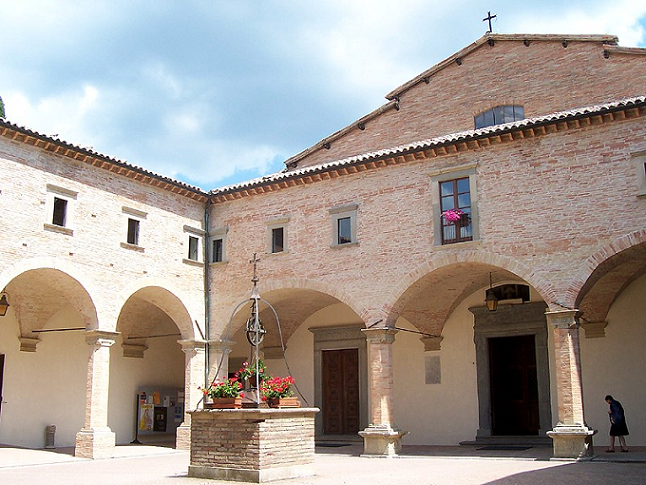 The Devotion to the Saint is very popular throughout Umbria, but especially at Gubbio, where, in every family, at least one member is called Ubaldo. The Feast of their Patron Saint is Celebrated by the inhabitants of the country around with great Solemnity, there being Religious and Civil Processions which call to mind the famous Festivities of The Middle Ages in Italy.

The Basilica of Sant'Ubaldo, with a Nave and four Aisles, is a Sanctuary atop Monte Ingino, just above the City. Noteworthy, are the Marble Altar and the Great Windows with episodes of The Life of Ubaldo. The finely-sculpted Portals and the fragmentary frescoes give a hint of the magnificent 15th-Century decoration once boasted by the Basilica.

Outside of Italy, a finger Relic of Saint Ubaldus is Venerated in the Saint-Theobald Collegiate Church of Thann, Haut-Rhin, France.
Posted by Zephyrinus at 00:00:00