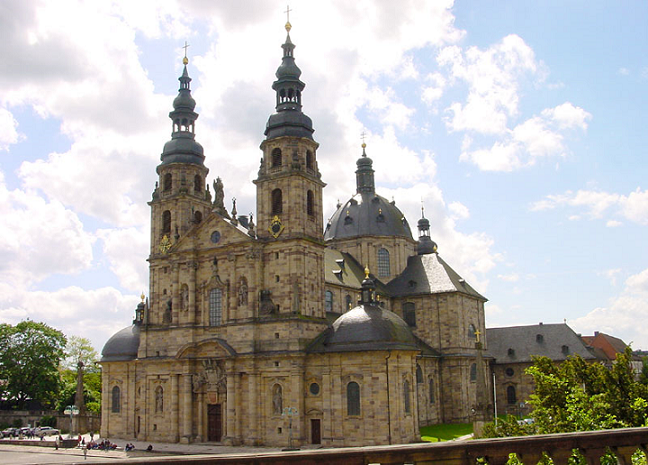 The following Text is from Wikipedia - the free encyclopædia,
unless stated otherwise.

Fulda Abbey, or, The Princely Abbey of Fulda, or, The Imperial Abbey of Fulda (German: Fürstabtei Fulda, Hochstift Fulda, Kloster Fulda) was a Benedictine Abbey, as well as an Ecclesiastical Principality centred on Fulda, in the present-day German State of Hesse.

It was Founded in 744 A.D., by Saint Sturmi, a Disciple of Saint Boniface. Through the 8th-Century A.D. and 9th-Century A.D., Fulda Abbey became a prominent Centre of Learning and Culture in Germany, and a site of Religious significance and Pilgrimage following the burial of Saint Boniface. The growth in population around Fulda would result in its elevation to a Prince-Bishopric in the second half of the 18th-Century.

In the Mid-8th-Century A.D., Saint Boniface commissioned Saint Sturmi to establish a larger Church than any other Founded by Boniface. In January 744 A.D., Saint Sturmi selected an un-populated plot of land along The Fulda River, and, shortly after, obtained Rights to the land.
The tomb of Princess Anna of Prussia.
Fulda Cathedral (previously Fulda Abbey),
Hesse, Germany.
Available on YouTube at
YOU TUBE
The Foundation of the Monastery dates to 12 March 744 A.D. Sturmi travelled to notable Monasteries of Italy, such as Monte Cassino, for inspiration in creating a Monastery of such grand size and splendour. Boniface was proud of Fulda, and he would obtain autonomy for the Monastery from the Bishops of the area by appealing to Pope Zachary for placement directly under The Holy See in 751 A.D.

Boniface would be entombed at Fulda following his Martyrdom in 754 A.D., in Frisia, as per his request, creating a destination for Pilgrimage in Germany and increasing its holy significance. Saint Sturmi would be named the first Abbot of the newly-established Monastery, and would lead Fulda through a period of rapid growth.

The Monks of Fulda practiced many specialised trades, and much production took place in the Monastery. Production of Manuscripts increased the size of the Library of Fulda, while skilled craftsmen produced many goods that would make the Monastery a financially wealthy establishment.

As Fulda grew, Members of the Monastery would move from the main building and establish villages in the outlying territories to connect with non-Monastery Members. They would establish themselves, based on trade and agriculture, while still remaining connected to the Monastery. Together, the Monks of Fulda would create a substantial Library, financially stable production, and an effective centre for education.[1]
Fulda Cathedral (previously Fulda Abbey),
Hesse, Germany.
Available on YouTube at
YOU TUBE
In 774 A.D., Emperor Charlemagne placed Fulda under his direct control to ensure its continued success. Fulda was becoming an important cultural centre to The Carolingian Empire, and Charlemagne hoped to ensure the continued salvation of his population through the Religious activity of Fulda.[2]

A notable Work that the Monks of Fulda produced was the “Annales Necrologici”, a List of all the deceased Members of the Abbey following the death of Saint Sturmi in 744 A.D.[3] The Monks would offer Prayer for The Dead, listed in the “Annales”, to [Editor: “try and”] ensure their Eternal Salvation.

While at first this record only contained the names of those at Fulda, as the power and prominence of Fulda grew, so too did the scope of who was to be included in the “Annales”. Patrons, citizens, and nobles of the area would all come to be recorded in this piece of Fulda and its concept of community. The documenting of dates of passing, beginning with Sturmi, created a sense of continuity and a reference for the passage of time for the Monks of Fulda.[4]

The School at the Fulda Monastery would become a major focus of the Monks under Sturmi’s successor, Abbot Baugulf, at the turn of the Century. It contained an Inner School for Christian Studies, and an Outer School for Secular Studies, including pupils who were not necessarily Members of the Monastery.

During Boniface's lifetime, he had sent the Teachers of Fulda to apprentice under notable Scholars in Franconia, Bavaria, and Thuringia, who would return with knowledge and texts of The Sciences, Literature, and Theology. In 787 A.D., Charlemagne praised Fulda as a model School for others, leading by example in educating the public in Secular and Ecclesiastical matters.[1]
Posted by Zephyrinus at 12:00:00