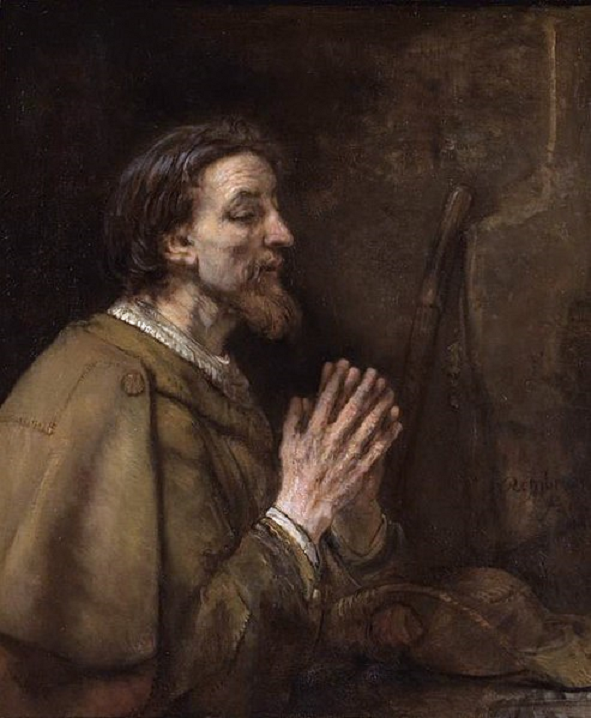 Saint James the Greater.
He is depicted clothed as a Pilgrim.
Note the Scallop Shell on his shoulder
and his Staff and Pilgrim's Hat beside him.
Artist: Rembrandt (1606–1669).
Date: 1661.
(Wikimedia Commons)

Like most of The Feasts of The Apostles, which were formerly of Obligation, that of Saint James is preceded by a Vigil.

This Saint was one of The College of Twelve, who, like The Twelve Sons of Jacob, received his inheritance and had to evangelise part of The Church, figured of old by The Promised Land (Epistle).

With his brother, Saint John, and with Saint Peter, he was privileged to witness The Transfiguration of Jesus and His Agony in The Garden of Olives.

He was the first among The Apostles to have the honour of bearing witness to Christ by shedding his blood in the City of Jerusalem. He thus gave, like his Master, the proof of the greatest love, which consists in sacrificing one's life for those one loves (Gospel).

Let us, with The Church, prepare ourselves in Meditation and Prayer for The Feast Day, tomorrow.

Mass: The Vigil of an Apostle: Ego autem.
Commemoration: Saint Christina. Virgin and Martyr.
(By Collects of Mass: Me exspectavérunt).

Email ThisBlogThis!Share to TwitterShare to FacebookShare to Pinterest
Labels: The Vigil Of Saint James. Apostle. 24 July.