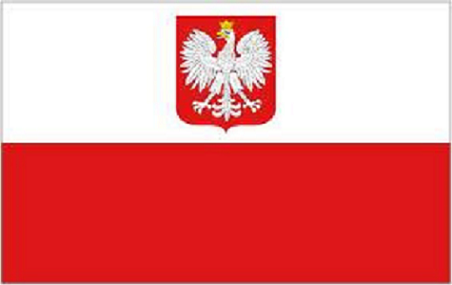 The State Flag of Poland with Coat-of-Arms.
Symbolic version. Based on Image: Flag of Poland.svg
and Image:Herb Polski.svg. Note: The Coat-of-Arms used here
is not the official, accurate, version.
Date: 26 June 2007.
Source: Own work.
Author: Aotearoa, Wanted
(Wikimedia Commons) 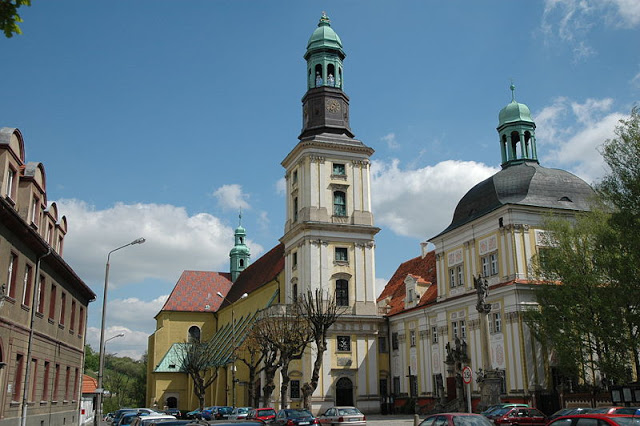 The Basilica of Saint Hedwig,
Trzebnica, Poland.
This File: 25 May 2007.
User: Merlin.
(Wikimedia Commons)
Hedwig, of Royal Birth, and still more illustrious by the innocence of her life, was the daughter of Berthold, Prince of Carinthia, and aunt, on the mother's side, of Saint Elizabeth of Hungary.

Having married Henry, Duke of Poland, she fulfilled her duties as wife in so holy a fashion that The Church compares her to the strong woman, whose portrait is drawn for us by The Holy Ghost in today's Epistle.

She had three sons and three daughters. She macerated her body, both by Fasting and Watching [Editor: Prayer before The Blessed Sacrament], and by the roughness of her clothes. She was very charitable to The Poor, whom she served at table.

Her husband, the Duke, having died, Hedwig, like the merchant mentioned in the Gospel, gave away all her riches to acquire The Precious Pearl of Eternal Life.

After Praying earnestly, and under Divine inspiration, she generously exchanged Worldly pomp for The Life of The Cross (Collect), entering The Cistercian Monastery of Trebnitz, where her daughter was Abbess.

She died on 15 October 1243, and Poland honours her with special Veneration as her Patroness. 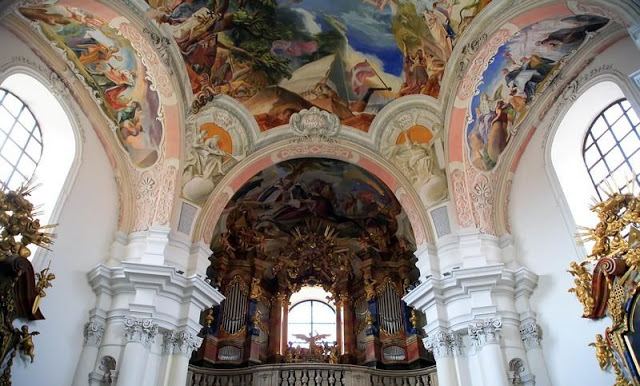 The Basilica of Saint Jadwiga (English: Hedwig), in Trzebnica, Poland, is a Convent for Cistercian Nuns, situated in Trzebnica (German: Trebnitz), North of Wrocław, in Silesia, Poland, Founded in 1203.

After a few decades of abandonment in the 19th-Century, it is an now an Abbey of The Sisters of Mercy of Saint Borromeo, since 1889.

The Abbey was established by the Silesian Piast, Duke Henry I (The Bearded), and his wife, Saint Hedwig of Andechs (Polish: Święta Jadwiga Śląska), confirmed by Pope Innocent III. 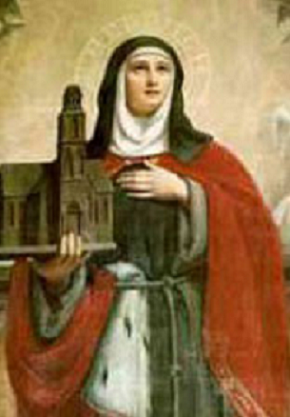 The legend of its Foundation relates that Duke Henry, when out hunting, fell into a swamp, from which he could not extricate himself. In return for his rescue from this perilous position, he vowed to build the Abbey. With Hedwig's consent, her brother, Ekbert of Andechs, then Bishop of Bamberg, chose the first Nuns that occupied the Convent.

The first Abbess was Petrussa, from Kitzingen Abbey; she was followed by Gertrude, the daughter of Hedwig. The Abbey was richly endowed with lands by Duke Henry. When Hedwig became a Widow, in 1238, she went to live at Trzebnica and was finally buried there. 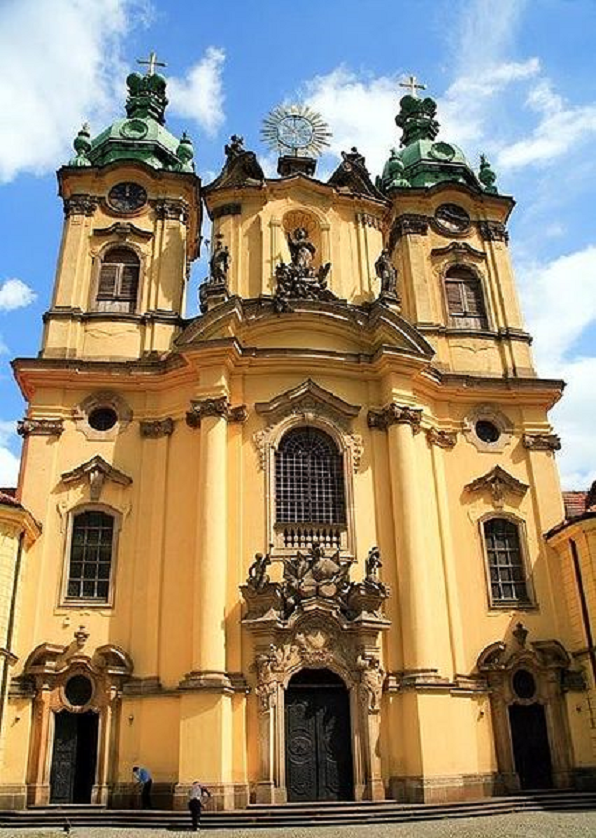 The Church of Saint Hedwig,
Legnickie Pole, Poland.
Source: http://www.poczta-polska.pl/mw/
Photo: 2007.
Author: Marek i Ewa Wojciechowscy.
Permission: GFDL
Attribution: © Marek and Ewa Wojciechowscy /
Trips over Poland /CC-BY-SA-3.0, 2.5, 2.0, 1.0 and GDFL
(Wikimedia Commons)
Up to 1515, the Abbesses were First Princesses of The Piast Dynasty, and. afterwards, members of the nobility.

It is said that, towards the end of the 13th-Century, the Nuns numbered 120. The Abbey also became a mausoleum of many Rulers of the fragmented Silesian Piasts. In 1672, there were thirty-two Nuns and six Lay Sisters; in 1805, there were twenty-three Nuns and six Lay Sisters. At the Protestant Reformation, most of the Nuns were Poles, as were the majority until the 18th-Century. 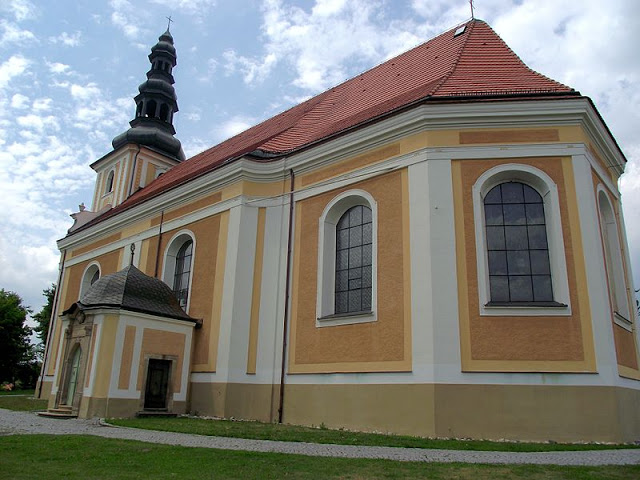 In 1742, in the aftermath of The First Silesian War and the Treaty of Breslau, Trebnitz found itself under the governance of Protestant Prussia and started to suffer from political discrimination.

The last Abbess, Dominica von Giller, died on 17 August 1810, and, on 11 November 1810, the Abbey was suppressed and Secularised, by Order of King Frederick William III. The building, which was extensive, was sold later and turned into a cloth factory. 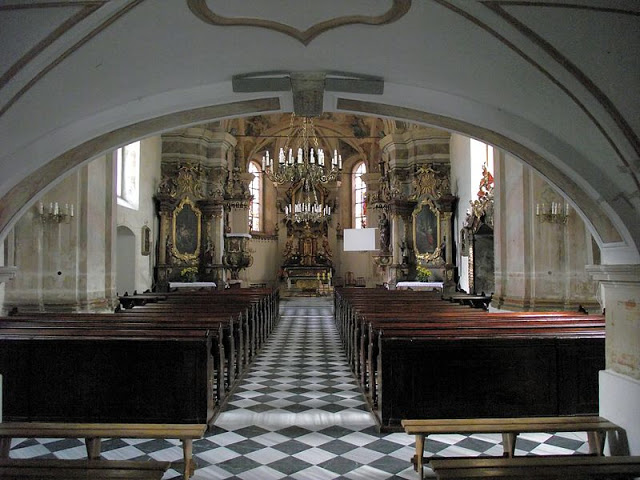 The Church, a Basilica, has Pillars in the Late-Romanesque Style, to which Baroque additions were made from 1741. It features several paintings with scenes from the life of Saint Hedwig by Michael Willmann. After the Secularisation of the Abbey, it became the Trebnitz Parish Church. 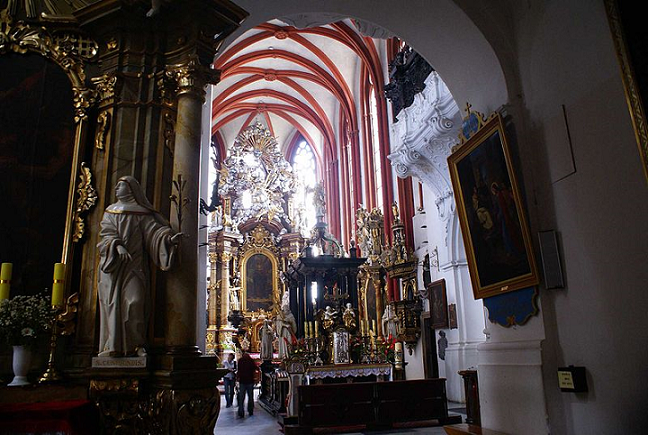 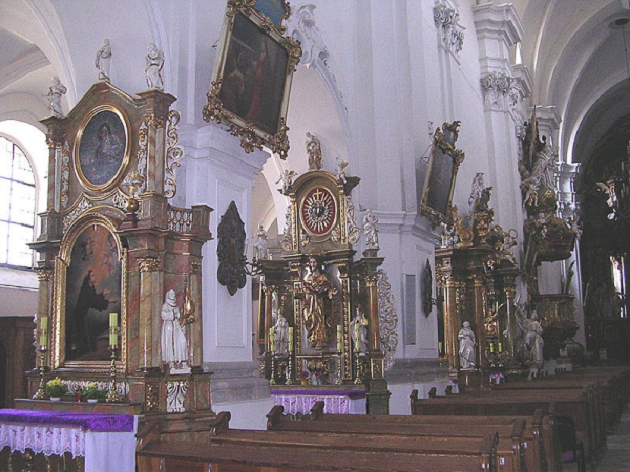 English: The Basilica of Saint Hedwig,
Trzebnica, Poland.
Polski: Trzebnica, kościół,
ob. par. p.w. śś. Bartłomieja i Jadwigi, 2 poł. XIII.
Photo: 8 April 2006.
Source: Own work.
Author: Barbara Maliszewska
(Wikimedia Commons)
The grave of Saint Hedwig is located in a Chapel, to the Right of The High Altar, donated by her grandson, Archbishop Ladislaus of Salzburg, in 1267. The grave of Duke Henry I, her husband, is in front of The High Altar.

Among those buried in the Church, are: Henry I (The Bearded), Duke of Silesia-Wrocław, 1238; Saint Hedwig of Andechs, Widow, 1243; Konrad von Feuchtwangen, Grand Master of The Teutonic Knights, 1296; Karolina of Legnica-Brieg, last scion of The Silesian Piasts, 1707.
Posted by Zephyrinus at 00:00:00