Text and Illustrations from Wikipedia - the free encyclopædia,
unless otherwise stated. 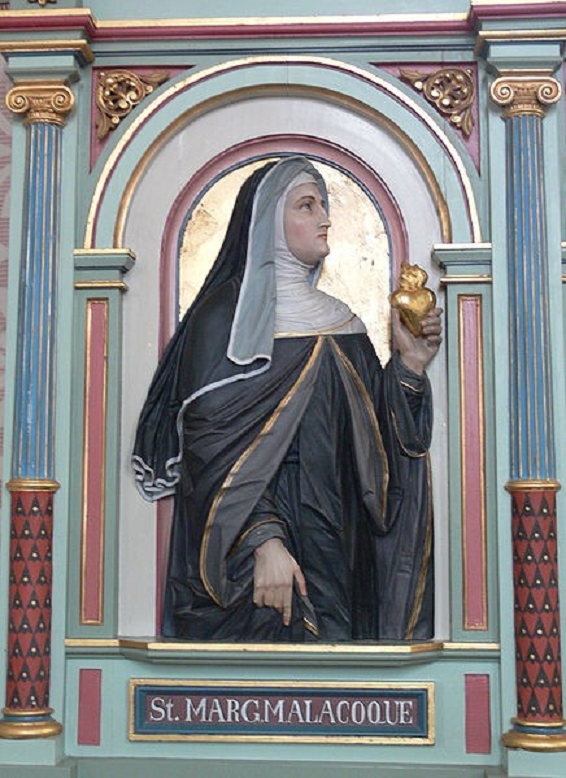 The Monastery of
The Visitation Nuns of Philadelphia.
Their Web-Site can be found
HERE 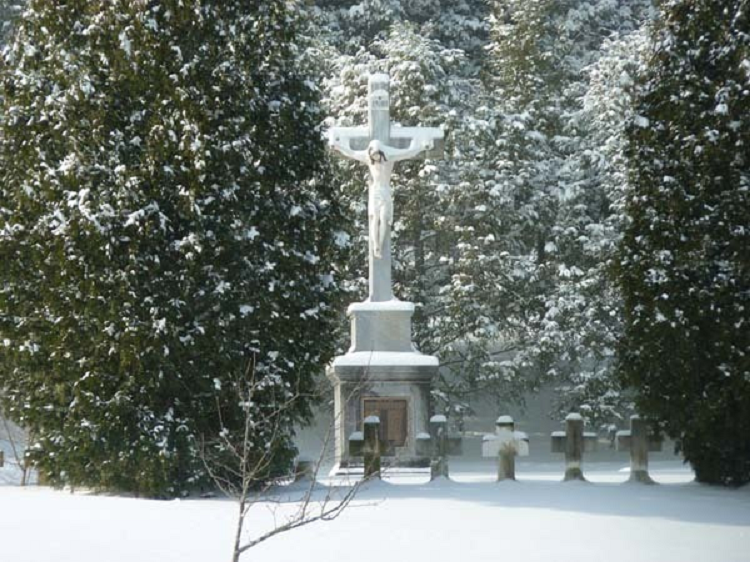 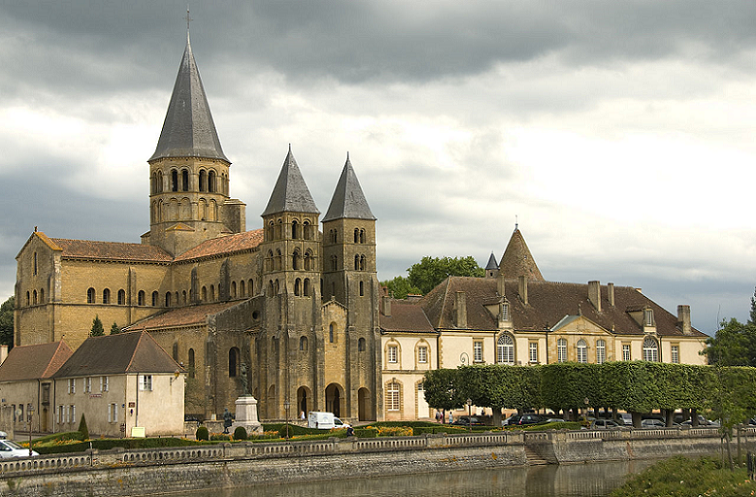 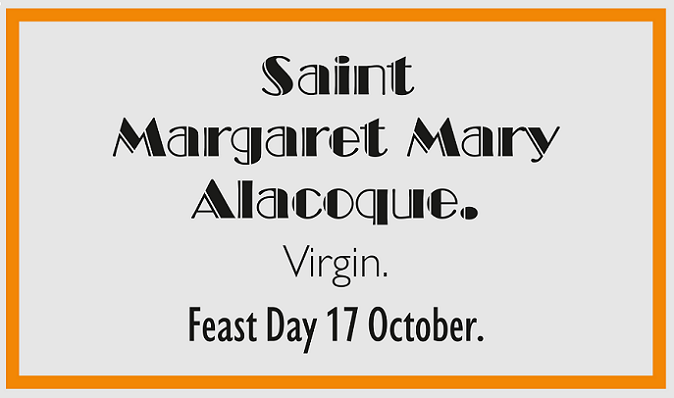 Saint Margaret Mary Alacoque, V.H.M. (French: Marguerite-Marie Alacoque) (1647-1690), was a French Roman Catholic Nun and Mystic, who promoted Devotion to The Sacred Heart of Jesus in its modern form. [Editor: The Order of The Visitation of Holy Mary (V.H.M.), or The Visitation Order, is a Roman Catholic Religious Order for Women. Members of The Order are also known as The Salesian Sisters, or, more commonly, as The Visitandines.]

Saint Margaret Mary Alacoque was born in 1647, in L'Hautecour, France, now part of the Commune of Verosvres, then in the Duchy of Burgundy, the only daughter of Claude Alacoque and Philiberte Lamyn, who had also several sons. From early childhood, Margaret was described as showing intense love for The Blessed Sacrament, and as preferring silence and Prayer to childhood play.

After her First Communion, at the age of nine, she practised, in secret, severe corporal mortification, until rheumatic fever confined her to bed for four years. At the end of this period, having made a Vow to The Blessed Virgin to Consecrate herself to Religious Life, she was instantly restored to perfect health. In recognition of this favour, she added the name "Mary" to her Baptismal name of "Margaret". According to her later account of her life, she had Visions of Jesus Christ, which she thought were a normal part of human experience, and continued to practice austerity. 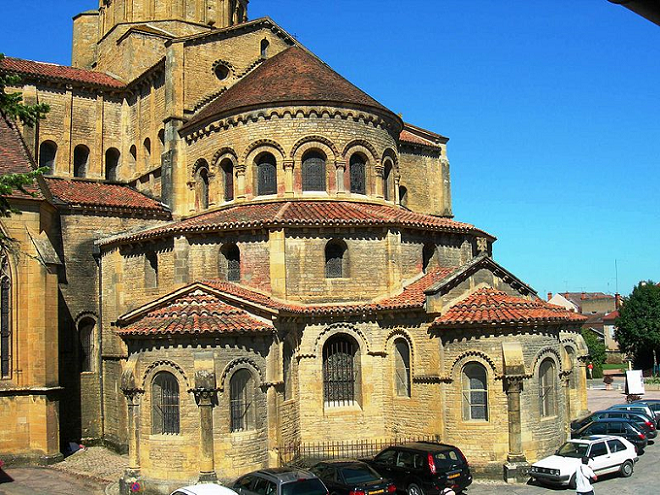 English: Apses of the Basilica of Paray-le-Monial, France.
Saint Margaret Mary Alacoque entered here in May 1671.
Français: Paray-le-Monial, les apsides.
Photo: 17 August 2007.
Source: Own work.
Author: Jan Sokol.
(Wikimedia Commons)
Saint Margaret Mary Alacoque.
Available on YouTube at
YOU TUBE
Saint Margaret Mary Alacoque lost her father at a young age, and the family's assets were held by a relative, who refused to hand them over, plunging her family into poverty. During this time, her only consolation was frequent visits to Pray before The Blessed Sacrament in the local Church. When she was seventeen, however, the family regained their fortune and her mother encouraged her to go out into society, in the hope of her finding a suitable husband. Out of obedience, and believing that her childhood Vow was no longer binding, she began to accompany her brothers in the social events of her society, attending Dances and Balls.

One night, however, she returned home, dressed in her finery, from a Ball for a Carnival, when she experienced a vision of Christ, scourged and bloody, in which He reproached her for her forgetfulness of Him, and of how His Heart was filled with love for her, due to her promise. As a result, she determined to fulfil her Vow, and entered, when almost twenty-four years of age, The Visitation Convent at Paray-le-Monial, on 25 May 1671, intending to become a Nun.

Saint Margaret Mary Alacoque was subjected to many trials to prove the genuineness of her Vocation. She was "Admitted to Wearing The Religious Habit" on 25 August 1671, but was not allowed to make her "Religious Profession" on the same date of the following year, which would have been normal. Finally, she was admitted to "Profession" on 6 November 1672. 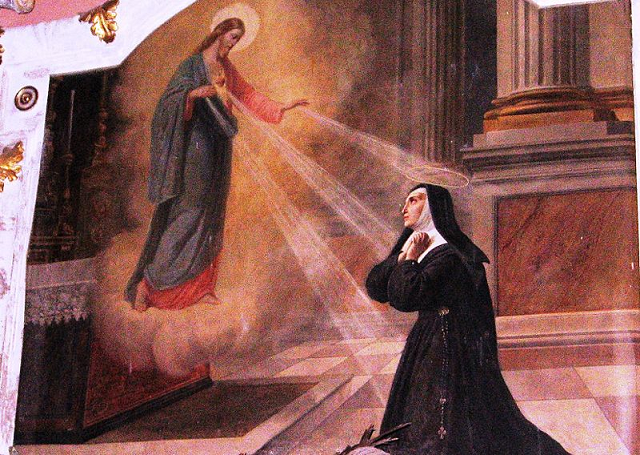 In this Monastery, Saint Margaret Mary Alacoque received several Private Revelations of The Sacred Heart, the first on 27 December 1673, and the final one eighteen months later. The Visions revealed to her the form of the Devotion, the chief features being reception of Holy Communion on The First Friday of each month, Eucharistic Adoration during a "Holy Hour" on Thursdays, and the Celebration of The Feast of The Sacred Heart. She stated that, in her Vision, she was instructed to spend an hour every Thursday night to meditate on Jesus' Agony in The Garden of Gethsemane. The Holy Hour practice later became widespread among Catholics.

On 27 December 1673, The Feast of Saint John (Apostle and Evangelist), Saint Margaret Mary reported that Jesus permitted her to rest her head upon His Heart, and then disclosed to her The Wonders of His Love, telling her that He desired to make them known to all mankind and to diffuse The Treasures of His Goodness, and that He had chosen her for this work.

Initially, discouraged in her efforts to follow the instruction she had received in her visions, Saint Margaret Mary Alacoque was eventually able to convince her Superior, Mother de Saumaise, of the authenticity of her visions. She was unable, however, to convince a group of Theologians of the validity of her apparitions, nor was she any more successful with many of the Members of her own Community, and suffered greatly at their hands. 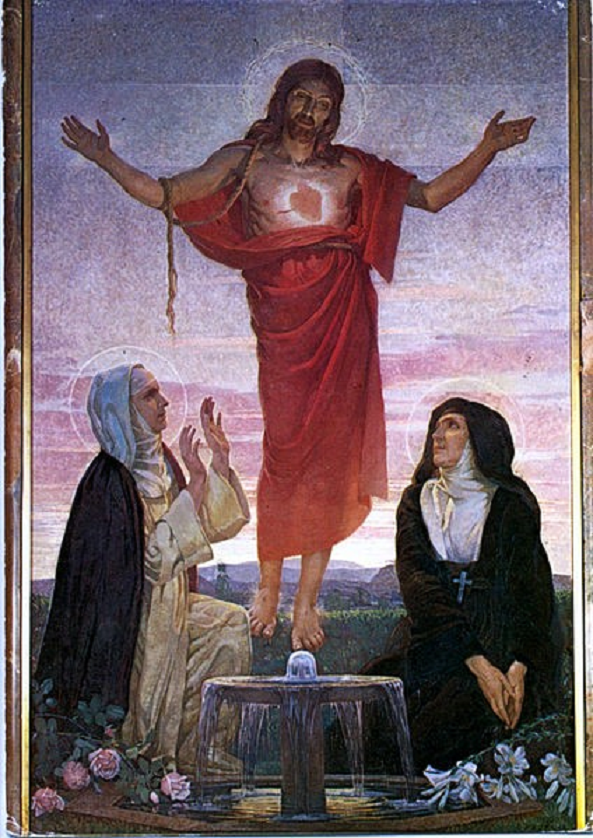 She eventually received the support of Saint Claude de la Colombière, S.J., The Community's Confessor for a time, who declared that the Visions were genuine. In 1683, opposition in The Community ended when Mother Melin was elected Superior and named Saint Margaret Mary as her Assistant. She later became Novice Mistress, and saw the Monastery observe The Feast of The Sacred Heart, privately, beginning in 1686. Two years later, a Chapel was built at the Basilica of Paray-le-Monial to honour The Sacred Heart. Saint Margaret Mary Alacoque died on 17 October 1690.

After Saint Margaret Mary Alacoque's death, the Devotion to The Sacred Heart was fostered by The Jesuits and was the subject of controversies within The Church. The practice was not officially recognised until seventy-five years later.

The discussion of Saint Margaret Mary Alacoque's own mission and qualities continued for years. All her Actions, her Revelations, her Spiritual Maxims, her Teachings regarding the Devotion to The Sacred Heart, of which she was the chief exponent, as well as the Apostle, were subjected to the most severe and minute examination, and, finally, The Sacred Congregation of Rites passed a favourable vote on the Heroic Virtues of this "Servant of God". 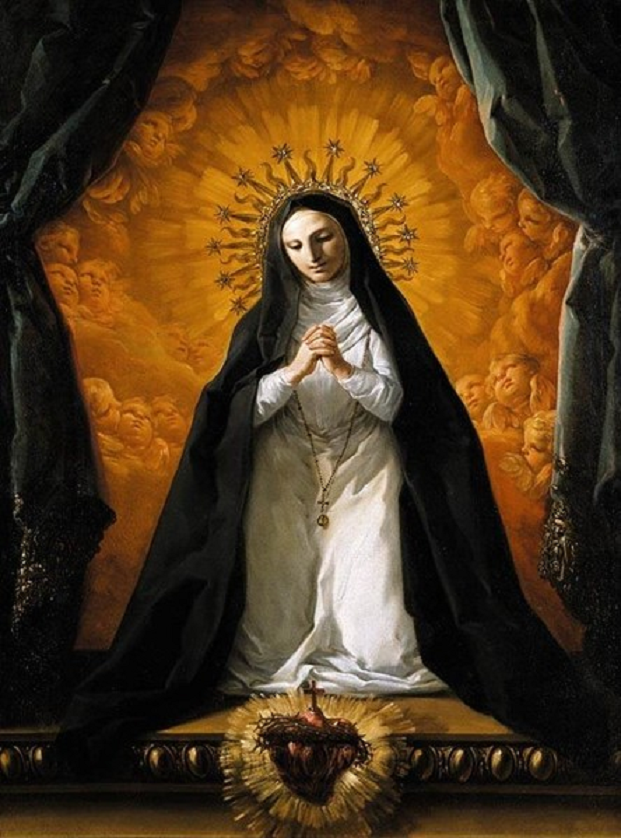 In March 1824, Pope Leo XII pronounced her Venerable and, on 18 September 1864, Blessed Pope Pius IX declared her Blessed. When her tomb was Canonically opened in July 1830, two instantaneous cures were recorded to have taken place. Her incorrupt body rests above the Side Altar in The Chapel of The Apparitions, located at The Visitation Monastery in Paray-le-Monial, and many striking Blessings have been claimed by Pilgrims attracted there from all parts of the World.

Saint Margaret Mary Alacoque was Canonised by Pope Benedict XV in 1920, and, in 1929, her Liturgical Commemoration was included in The General Roman Calendar for Celebration on the day of her death, 17 October.

In his 1928 Encyclical, Miserentissimus Redemptor, Pope Pius XI affirmed The Church's position, regarding the credibility of her Visions of Jesus Christ, by speaking of Jesus as having "manifested Himself" to Saint Margaret Mary and having "promised her that all those who rendered this honour to His Heart would be endowed with an abundance of Heavenly Graces". 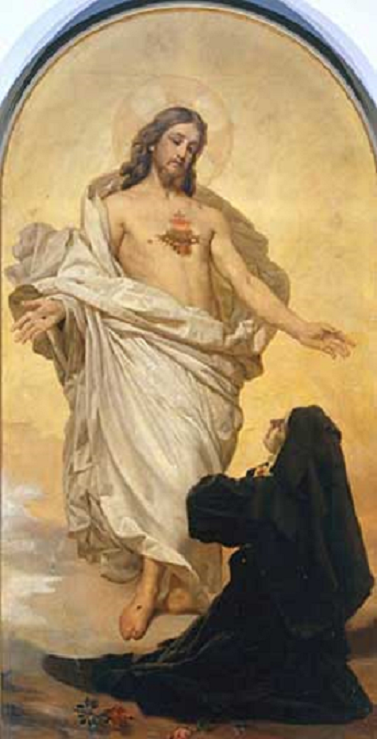 "And He [Christ] showed me that it was His great desire of being loved by men, and of withdrawing them from the path of ruin, that made Him form the design of manifesting His Heart to men, with all the treasures of Love, of Mercy, of Grace, of Sanctification and Salvation, which it contains, in order that those who desire to render Him and procure Him all the honour and love possible, might themselves be abundantly enriched with those Divine Treasures, of which His Heart is the source." — from "Revelations of Our Lord to Saint Margaret Mary Alacoque".

In James Joyce's Short Story, "Eveline", part of his "Dubliners", a "coloured print of the promises made to Saint Margaret Mary Alacoque" is mentioned, as part of the decorations of an Irish home at the turn of the 20th-Century, testifying to Saint Margaret Mary's enduring popularity among Irish Catholics. 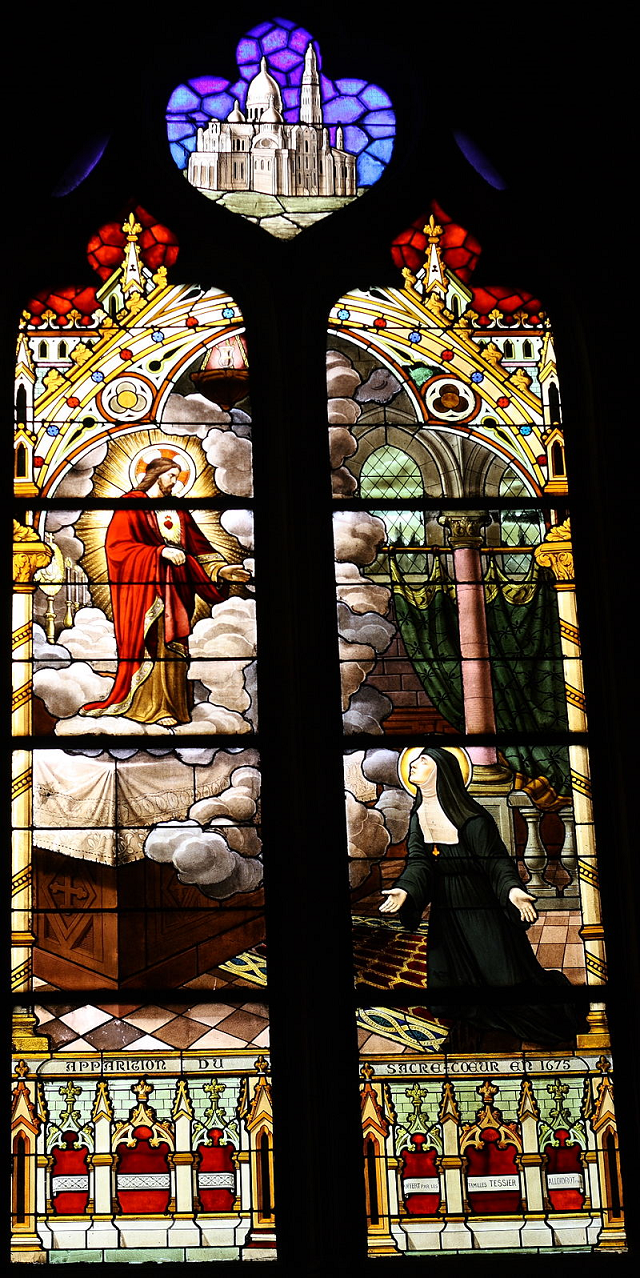 Margaret Mary Alacoque was born at Vérosvres, in the Diocese of Autun, France, in 1647. While still young, she Consecrated herself to Jesus Christ by a Vow of Perpetual Virginity. At the age of twenty-three, she entered the Convent of The Visitation Order at Paray-le-Monial, France.

The Mysteries of The Sacred Heart were revealed to her in three special manifestations, all unknown to her Community. Saint Margaret Mary spent the last years of her life in spreading this Devotion. She died on 17 October 1690, at the age of forty-three years. Her body was buried under a slab, close to the grille in the Nuns' Chapel, on the spot where she was kneeling when Our Lord appeared to her.

She was Beatified by Blessed Pope Pius IX, in 1864, and Canonised by Pope Benedict XV on The Feast of The Ascension 1920. Pope Pius XI extended her Feast to the whole Church on 28 June 1929.

In order to live in the spirit of The Liturgy (which is also the spirit of The Church), and Consecrate The First Friday Of The Month to The Sacred Heart (as The Church does by granting Indulgences), let us adapt this Devotion to the different Feasts of The Cycle. It will thus give a greater variety, both in its material object (The Sacred Heart of Jesus born at Christmas, dying on Good Friday, rising again at Easter), and in its formal object, the love of Jesus in His Joyful, Sorrowful, and Glorious Mysteries.