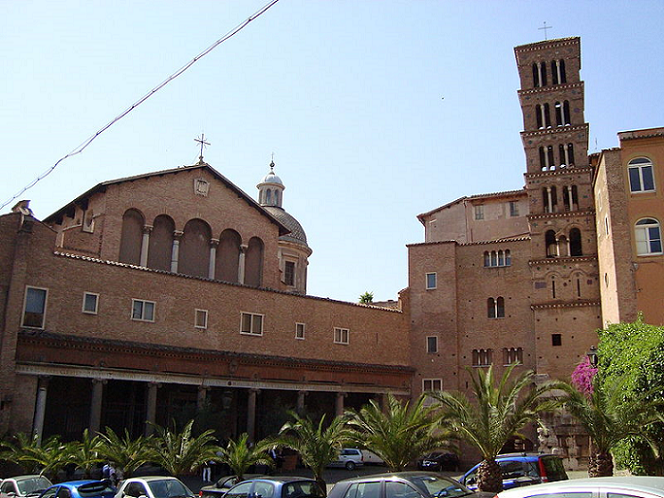 English: Basilica of The Holy Martyrs, John and Paul, on Mount Coelius, Rome.
The Lenten Station, for Friday after Ash Wednesday, is held at this Basilica.
Français: Vue d'ensemble de la Basilique
Santi Giovanni e Paolo de Rome sur le Celio.
Photo: May 2009.
Source: Own work.
Author: LPLT
(Wikimedia Commons)
The two brothers, John and Paul, were Romans and in the service of Constantia, daughter of Emperor Constantine. Julian the Apostate, having invited them to be among his familiar friends, they refused, so as to remain faithful to Jesus.

Ten days were allowed for them to deliberate, and they used them in distributing all they possessed to the Poor. They were then arrested and "without fearing those who can only kill the body, and beyond that can do nothing more" (Gospel), they became, in 362 A.D., brothers more than ever, by the same Faith and the same Martyrdom (Collect, Gradual, Alleluia).

The Church compares them "to the two olive-trees and to the two candle-sticks, mentioned in The Apocalypse, which shine before The Lord." [Response at Matins.]
Basilica of Saint John and Saint Paul
(Santi Giovanni e Paolo), Martyrs. Rome.
Available on YouTube at
YOU TUBE
"These Just Men," she [Editor: The Church] adds, "have stood before The Lord and have not been separated from one another." [Antiphon at The Magnificat.] Wherefore, both their names, mentioned in The Canon of The Mass (First List), pass on from generation to generation, while their bodies rest in peace (Epistle) in the ancient Church erected in their honour on Mount Coelius at Rome. It is there that The Station is held on The Friday after Ash Wednesday.
Let us enjoy today, with The Church, the double triumph of Saints John and Paul (Collect) and let us, like them, courageously confess Jesus before Men, so that He may recognise us for His own before His Angels (Gospel). 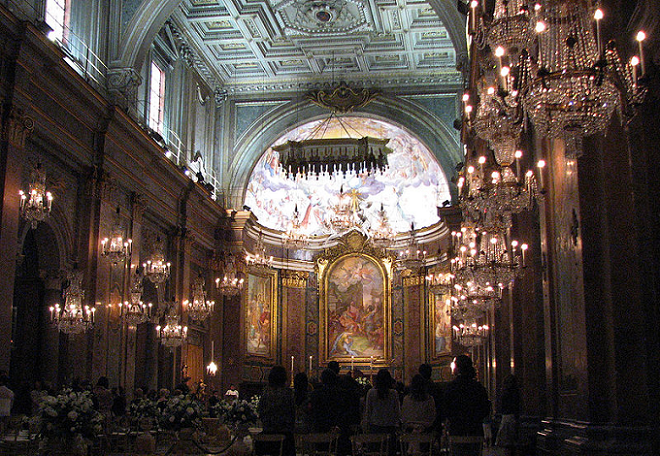 John and Paul were Saints in The Roman Empire. They were Martyred at Rome on 26 June. They should not be confused with the famous Apostles of the same names (see Saint Paul; Saint John the Apostle). The year of their Martyrdom is uncertain according to their Acts; it occurred under Julian the Apostate (361 A.D. – 363 A.D.).

In the second half of the 4th-Century A.D., Byzantius, the Roman Senator, and Saint Pammachius, his son, fashioned their house on The Cælian Hill into a Christian Basilica. In the 5th-Century A.D., the Presbyteri Tituli Byzantii (Priests of The Church of Byzantius) are mentioned in an Inscription and among the signatures of The Roman Council of 499 A.D. The Church was also called the Titulus Pammachii, after Byzantius's son, the pious friend of Saint Jerome.

In the ancient apartments on the ground-floor of the house of Byzantius, which were still retained under the Basilica, the tomb of two Roman Martyrs, John and Paul, was the object of Veneration as early as the 5th-Century A.D.

The Sacramentarium Leonianum already indicates, in the Preface to The Feast of the Saints, that they rested within the City walls ("Sacr. Leon.", ed. Feltoe, Cambridge, 1896, 34), while, in one of the early itineraries to the tombs of The Roman Martyrs, their grave is assigned to the Church on The Cælian (De rossi, "Roma sotterrania", I, 138, 175). 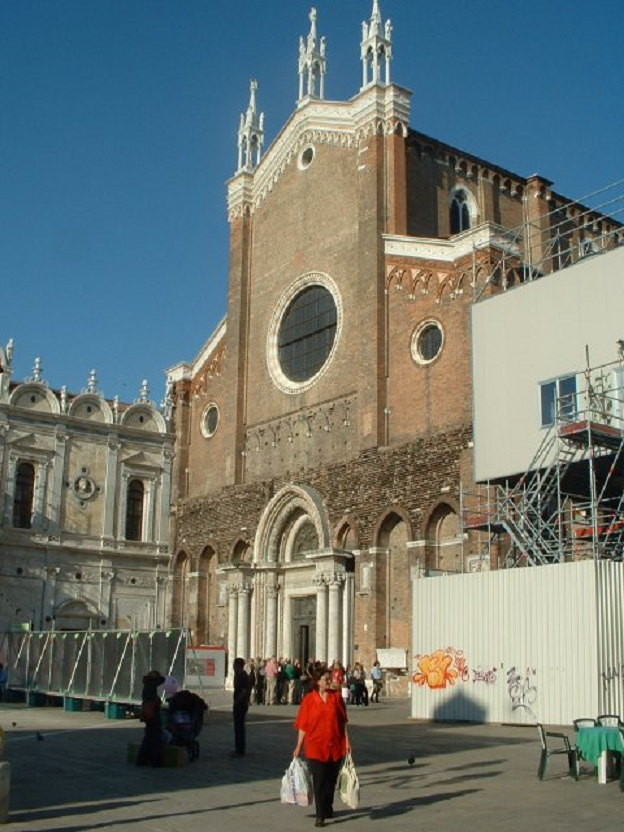 Basilica di San Zanipolo, Venice, Italy
(Basilica of Saints John and Paul).
Photo taken by Necrothesp, 14 May 2004.
Date: 1 July 2004 (original upload date).
Source: Transferred from en.wikipedia to Commons
by Padawane using CommonsHelper
Author: Original uploader was Necrothesp at English Wikipedia
(Wikimedia Commons)
The Titulus Byzantii, or Pammachii, was consequently known at a very early date by the names of the two Martyrs (Titulus SS. Joannis et Pauli). That the two Saints are Martyrs of The Roman Church is historically certain; as to how and when their bodies found a resting-place in the house of Pammachius, under the Basilica, we only know that it certainly occurred in the 4th-Century A.D. The year and circumstances of their Martyrdom are likewise unknown.

According to their Acts, the Martyrs were eunuchs of Constantina, daughter of Constantine the Great, and became acquainted with a certain Gallicanus, who built a Church in Ostia. At the command of Julian the Apostate, they were beheaded secretly by Terentianus in their house on The Cælian Hill, where their Church was subsequently erected, and where they were buried.

The rooms on the ground-floor, of the above-mentioned house of Pammachius, were rediscovered under the Basilica of Santi Giovanni e Paolo in Rome. They are decorated with important and interesting frescoes, while the original tomb (“Confessio”) of Saints John and Paul is covered with paintings, of which the Martyrs are the subject. The rooms and the tomb form one of the most important Early-Christian Memorials in Rome. 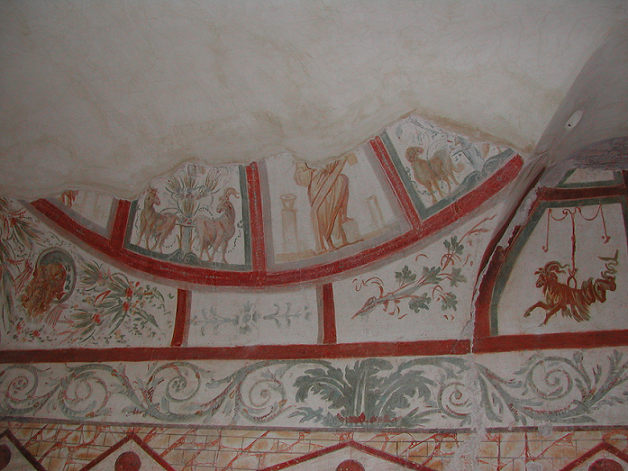 English: Frescoes in the original Roman house
below the present-day Basilica of Santi Giovanni e Paolo, Rome.
Italiano: Roma , casa romana sotto la basilica
dei santi Giovanni e Paolo al Celio - affreschi.
Photo: 3 October 2004.
Source: Own work.
Author: user:Lalupa
(Wikimedia Commons)
Since the erection of the Basilica, the two Saints have been greatly Venerated, and their names have been inserted in The Canon of The Mass. Their Feast Day is kept on 26 June.

The Basilica of Santi Giovanni e Paolo, in Rome, is Dedicated to them, as well as the Basilica di San Zanipolo in Venice ("Zanipolo" being Venetian for "John and Paul").

The Lüeneberg Manuscript (circa 1440–1450) mentions "The Day of John and Paul" in an early German account of The Pied Piper of Hamelin.

A small village next to Caiazzo, in the Campania Region of Italy, is named Santi Giovanni e Paolo, in honour of these Martyrs. Many residents of this village bear the family name "San Giovanni," as do the descendants of immigrants to The United States from this village (in particular, in Michigan, New York, and Florida).
Posted by Zephyrinus at 00:00:00
Labels: Saint John And Saint Paul. Martyrs. Feast Day 26 June.