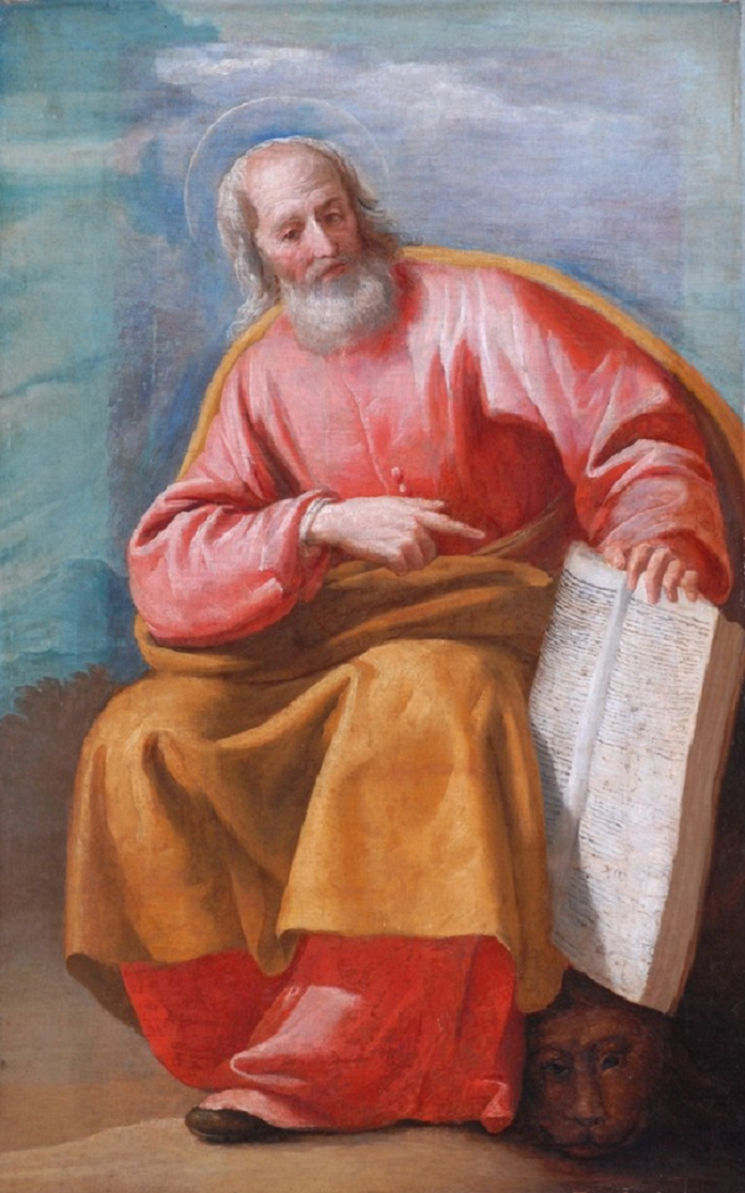 Saint Mark The Evangelist.
Illustration: UNA VOCE OF ORANGE COUNTY
Artist: René de Cramer.
“Copyright Brunelmar/Ghent/Belgium”.
Used with Permission.
Saint Mark, the Disciple of Saint Peter, is one of The Four Evangelists (Collect) who wrote, under the inspiration of The Holy Ghost, an abridgement of The Life of Jesus. His narration begins by the mission of Saint John the Baptist, whose "voice was heard in the desert"; he is represented with a Lion lying at his feet, because the Lion, one of the four symbolical animals in the vision of Ezechiel (Epistle), makes the desert re-echo with its roaring.

He was one of the seventy-two Disciples (Gospel). He went to Egypt, where he was the first to announce Christ at Alexandria. The Preaching of the Gospel, which his Martyrdom confirmed, made him to enter into Glory (Secret), where Saint John shows him to us as one of the four symbolical animals who attend The Triumph of The Immolated Lamb.

Statue of Saint Mark the Evangelist (Copy).
Artist: Donatello
Location: Orsanmichele, Florence, Italy.
This File: 22 August 2005.
User: Cnelson~commonswiki
(Wikimedia Commons)
His body was taken to Venice, whose Patron he is since the 9th-Century A.D. Rome possesses a Church Dedicated to Saint Mark, where a Station is held on The Monday of The Third Week in Lent.

Let us profit by the teaching of Saint Mark, who wrote the Gospel of Christ and Preached it, and let us have recourse to his Prayers (Collect).

Mass: Protexisti.
Commemoration: Of The Rogations, should The Rogation Mass not be Celebrated.
Credo: Is said.
Preface: Of The Apostles.