Our Lady Of The Snows. 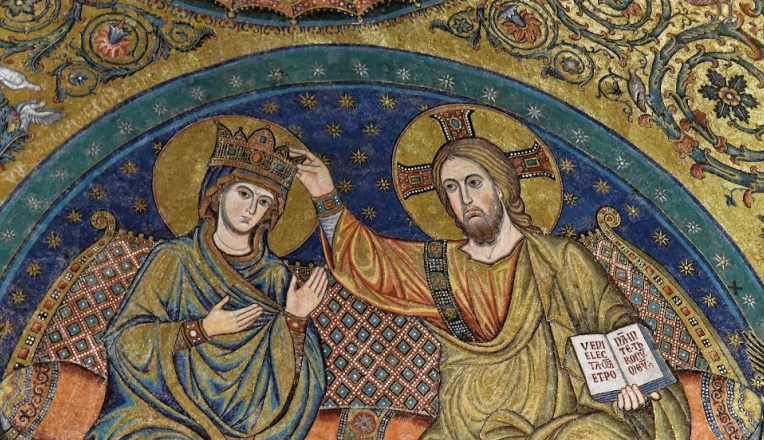 Jesus Crowns His Beloved Mother.
Mosaic in the Apse, Our Lady of The Snows
(Basilica of Saint Mary Major,
“Basilica Sanctæ Mariæ Maioris”).
Illustration: FSSPX NEWS
This Article is taken from FSSPX NEWS
“Our Lady of The Snows” is an old name for Saint Mary Major, a Church that is a Major Papal Basilica in Rome and the biggest Marian Shrine of ancient Christianity, being originally constructed by Pope Liberius around 360 A.D.

It was embellished with beautiful mosaics of Mary and Christ in commemoration of The Council of Ephesus in 431 A.D. There, in the presence of The Papal Legate, Catholic Orthodoxy triumphed over heresy in the great cry of dogmatic Faith, “Holy Mary Mother of God” – Theotokos.

Thus, the second part of The Hail Mary, wherein we say: “Holy Mary Mother of God, Pray for us sinners”, is a sign of universal Catholic Unity of The East and The West, sanctioned and affirmed by Papal authority. The Vicar of Christ is truly Mary’s son.

But, in The Liturgical Rite of a Marian Feast that celebrates the building of a great Church in Mary’s honour, we are also given a sign of Catholic Orthodoxy and authenticity.

Firstly, the whole meaning of Mary is to bring mankind, Soul and body to Christ, and to mould mankind anew in Christ’s image. This continuation and repetition of The Incarnation has its place, its instruments, and its doctrine, in every Catholic Church.

Secondly, nearly every Marian Apparition is culminated by a Church, so that, under the impulse of Marian Devotion, the work of The Incarnation may continue in the most perfect Catholic Sacramental and Doctrinal Orthodoxy. Thus, Guadalupe, Lourdes, La Salette, Pontmain, and Fatima, have Marian Churches explicitly requested by Our Lady to continue Her vital function of bringing mankind, Soul and body to Christ. Wherever Mary appears, there appears Christ in all His Glory, Sacramental Presence and Teaching.

Thus, we see two important qualities of Marian Devotion: It is Doctrinal, and it is Priestly.

Priestly, because to know and love Christ is to join oneself whole and entire to His Sacrifice, continued and applied in The Seven Sacraments. Thus, The Catholic Church, in Priest and people, Worship The Triune God in a Divine Liturgy which takes place in the Sacred space of a Consecrated Church under the guidance and patronage of The Mother of God.

This ethos of a Consecrated Church requires the concourse of The Catholic Hierarchy through the Bishop as the head of The Catholic Clergy. And, with this concourse of Clergy, the Teaching of authentic Catholic Doctrine, in solid Orthodoxy and Unity in time and space with Rome and the Tradition of The Apostles, is guaranteed. This Theology is most clear in Saint Mary Major.

It is impossible to restore all things in Christ without recourse to Mary. And this recourse to Mary, in the latter times, will have its power by the Marian movement nourished by the Marian Shrines.
Doesn't the special promise of Our Blessed Mother concerning Portugal, and assuring that “the Dogma of The Faith will be preserved there”, mean that Marian Devotion, which introduces to the perfect knowledge of Christ, will survive all storms ?
It is a sign of hope that one day God will restore through it the glory of His Son and His Mother, especially in Russia, and to Saint Mary Major in Rome.
Posted by Zephyrinus at 11:00:00

Email ThisBlogThis!Share to TwitterShare to FacebookShare to Pinterest
Labels: Our Lady Of The Snows.