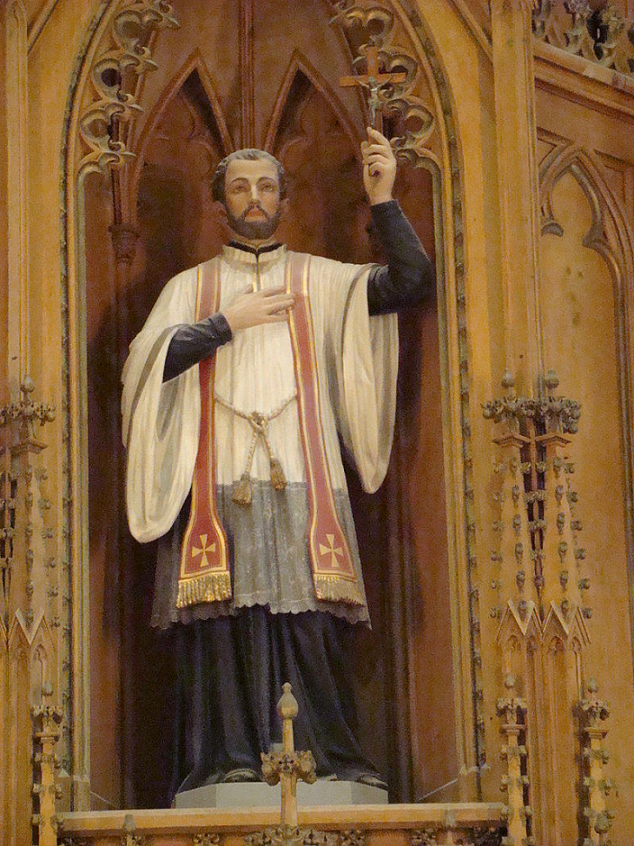 Statue of Saint Francis Xavier,
Saint Francis Xavier Catholic Church,
Superior, Wisconsin, United States of America.
Photo: 20 April 2015.
Source: Own work.
Author: Billertl
(Wikimedia Commons)
Saint Francis Xavier (1506-1552), was touched, after a long resistance, by the words constantly repeated to him by Saint Ignatius Loyola: "What does it profit a man if he gains the whole World, and suffers the loss of his own Soul ?" He then became one of Saint Ignatius' most zealous fellow-workers in the newly-formed Society of Jesus (The Jesuits).

This was the programme of the whole life of Saint Francis Xavier," whose Preaching and Miracles added to The Church the Nations of The Indies" (Collect). He Preached the Gospel there, and in Japan, to more than fifty Kingdoms, and converted innumerable pagans.

Let us share in the Apostolic zeal of this Saint, who has earned the glorious Title of Patron of The Propagation of The Faith; and let us help this work with our Prayers and our Alms.

Mass: Loquébar.
Commemoration: Of The Feria.
Saint Francis Xavier.
The Patron Saint of Missionaries.
Available on YouTube at
YOU TUBE
The following Text is from Wikipedia - the free encyclopædia.

Saint Francis Xavier, S.J. (who was born Francisco de Jasso y Azpilicueta,
7 April 1506 - 3 December 1552), was a Navarrese-Basque Roman Catholic Missionary, born in Javier (Xavier in Navarro-Aragonese or Xabier in Basque), Kingdom of Navarre (now part of Spain), and a co-founder of The Society of Jesus. He was a companion of Saint Ignatius of Loyola and one of the first seven Jesuits who took vows of Poverty and Chastity at Montmartre, Paris in 1534.

He led an extensive Mission into Asia, mainly in The Portuguese Empire of the time, and was influential in Evangelisation work, most notably in India. He also was the first Christian Missionary to venture into Japan, Borneo, The Maluku Islands, and other areas. In those areas, struggling to learn the local languages and in the face of opposition, he had less success than he had enjoyed in India. Xavier was about to extend his Missionary Preaching to China, but died in Shangchuan Island shortly before he could do so. 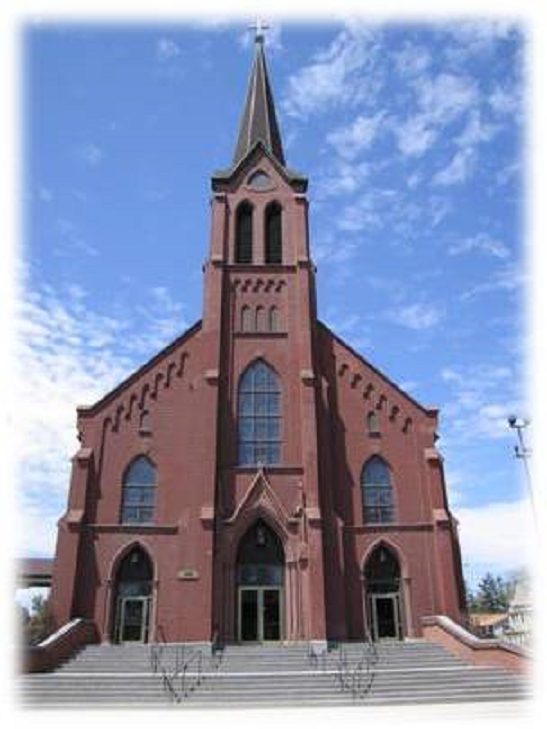 Saint Francis Xavier Catholic Church,
Superior, Wisconsin, United States of America.
Illustration: SAINT FRANCIS XAVIER CHURCH WEB-SITE
He was Beatified by Pope Saint Paul V on 25 October 1619 and was Canonised by Pope Gregory XV on 12 March 1622. In 1624, he was made Co-Patron of Navarre, Spain. Known as "The Apostle of The Indies," and "The Apostle of Japan", he is considered to be one of the greatest Missionaries since Saint Paul.

In 1927, Pope Pius XI published the Decree "Apostolicorum in Missionibus", naming Saint Francis Xavier, along with Saint Thérèse of Lisieux, Co-Patron of all Foreign Missions. He is now Co-Patron Saint of Navarre, Spain, with San Fermin. The Day of Navarre (Día de Navarra) marks the Anniversary of Saint Francis Xavier's death, on 3 December 1552.
Posted by Zephyrinus at 00:00:00