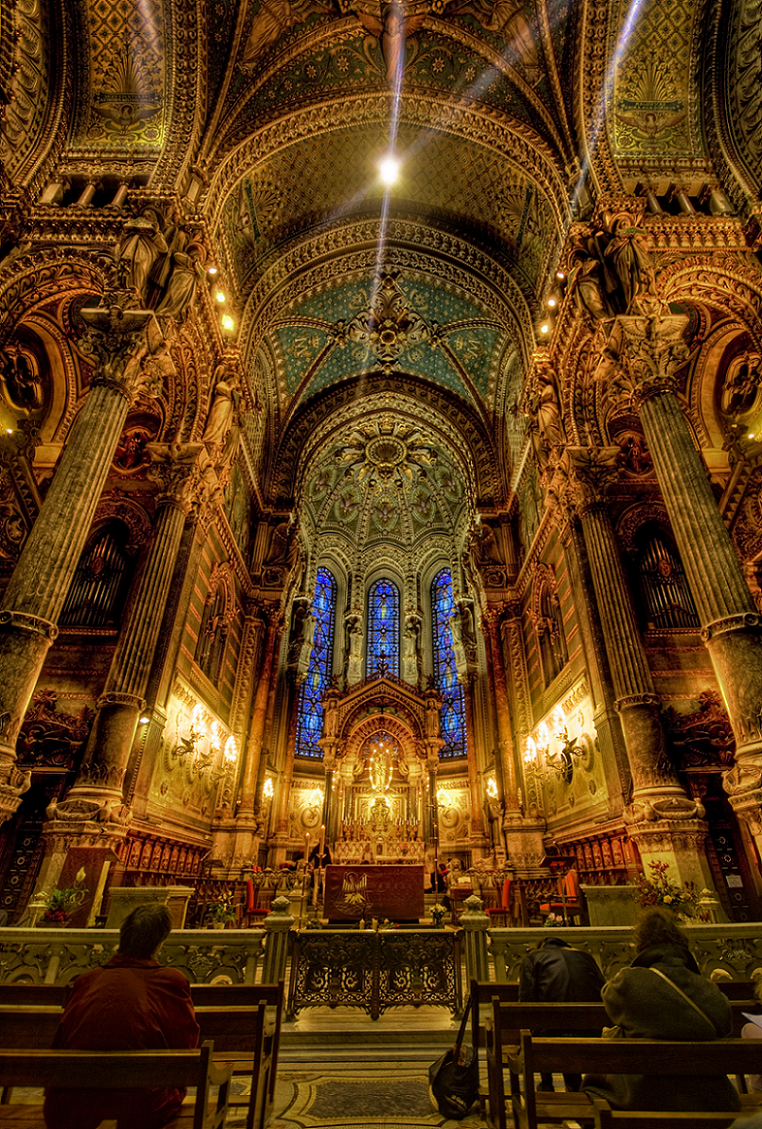 The following Text is from Wikipedia - the free encyclopædia,
unless stated otherwise.
The Basilica of Notre-Dame de Fourvière (French: Basilique Notre-Dame de Fourvière) is a Minor Basilica in Lyon, France. It was built with private funds between 1872 and 1896 in a dominant position overlooking the City. The site it occupies was once the Roman Forum of Trajan, (Latin: “Forum Vetus”) (Old Forum), thus its name (as an inverted corruption of the French Vieux-Forum).

Fourvière is dedicated to The Virgin Mary, to whom is attributed the salvation of the City of Lyon from The Bubonic Plague that swept Europe in 1643.[1]
Each year in early December (8 December, Feast Day of The Immaculate Conception), Lyon thanks The Blessed Virgin for saving the City, by lighting candles throughout the City, in what is called the Fête des Lumières, or, The Festival of Lights.[2]

Basilique Notre-Dame De Fourvière, Lyon, France.
“The Upside-Down Elephant”.
Available on YouTube at
YOU TUBE
The Virgin is also credited with saving the City a number of other times, such as from a Cholera epidemic in 1832, and from Prussian invasion in 1870.[1]

During The Franco-Prussian War (1870–1871), Prussian forces, having taken Paris, were progressing South towards Lyon. Their halt and retreat were, once again, attributed by The Church to the Intercession of The Virgin Mary.

Speculating on the reasons for the construction of such an elaborate and expensive building, one author makes the statement that: "The reaction to the communes of Paris and Lyon were triumphalist monuments, The Sacré-Coeur of Montmartre and The Basilica of Fourvière, dominating both Cities. These buildings were erected with private funds, as gigantic “Ex-Votos”, to thank God for victory over the Socialists and in expiation of the sins of modern France."[3]

Perched on top of the Fourvière hill, the Basilica looms impressively over the City of Lyon, from where it can be seen from many vantage points; not unintentionally, the Basilica of Fourvière has become a symbol of the City.
The Basilica, which offers guided tours and contains a Museum of Sacred Art, receives two million visitors annually.[2] At certain times, members of the public may access the Basilica's North Tower for a spectacular 180-degree view of Lyon and its suburbs. On a clear day, Mont Blanc, the highest point in Europe, can be seen in the distance.[2]

The design of the Basilica, by Pierre Bossan, draws from both Romanesque and Byzantine Architecture, two non-Gothic models that were unusual choices at the time. It has four main Towers, and a Bell-Tower topped with a gilded statue of The Virgin Mary. It features fine Mosaics, superb Stained-Glass Windows,[4] and a Crypt of Saint Joseph.

Fourvière actually contains two Churches, one on top of the other. The Upper Sanctuary is very ornate, while the Lower Sanctuary is a much simpler design. Work on the triumphant Basilica was begun in 1872 and finished in 1884. Finishing touches in the Interior were not completed until as late as 1964.

Bossan's first sketches for the Basilica seem to date from 1846. At the time he was in Palermo, Sicily.[5]

The Basilica has acquired the local nickname of "The Upside-Down Elephant", because the building looks like the body of an Elephant and the four Towers look like its legs.[6]

Les Petits Chanteurs de Saint-Marc, The Children's Choir of Saint Mark, is the official Choir of the Basilica. This Choir became well-known after the release of the film, Les Choristes. The Choir's Director is Monsieur Nicolas Porte.

Since 1982, the Tower has housed the Antennæ of Radio Fourvière, the predecessor of Radios Chrétiennes Francophones.

Fourvière has always been a popular place of Pilgrimage. There has been a Shrine at Fourvière, dedicated to Our Lady, since 1170. The Chapel and parts of the building have been rebuilt at different times over the Centuries, the most recent major works being in 1852 when the former Steeple was replaced by a Tower, surmounted by a Golden Statue of The Virgin Mary, sculpted by Joseph-Hugues Fabisch (1812–1886).[6]

On 23 July 1816, twelve Marist aspirants, Priests and Seminarians, climbed the hill to The Shrine of Our Lady of Fourvière, and placed their promise to Found The Society of Mary (Marists), under the Corporal on The Altar, while Fr. Jean-Claude Courveille, the first Superior-General of The Marists, Celebrated Mass.[7]

On 30 September 1821, Fr. André Coindre and ten others made Private Vows in the Chapel there, thus Founding The Fratres a Sacratissimo Corde Iesu (The Brothers of The Sacred Heart), a Roman Catholic Religious Community, primarily devoted to the education of the young.[8]

On 21 January 1851, Fr. Peter Julian Eymard Prayed at The Shrine of Our Lady of Fourvière and was inspired to Found The Congregation of The Blessed Sacrament.[9]

When the City of Lyon was spared in The Franco-Prussian War (1870), the community committed to build the present Basilica alongside the ancient Chapel.[6]
Posted by Zephyrinus at 00:30:00