On The Office Of Vespers For Sundays And Feasts During The Time After Pentecost. English: Second Vespers of The Fourth Sunday After Easter.
From the Church of Saint-Eugène - Sainte-Cécile, Paris.
Français: Secondes vêpres du IVème dimanche après Pâques.
Available on YouTube at
YOU TUBE
The following Text is from Wikipedia - the free encyclopædia,
unless stated otherwise.
Vespers is a Service of Evening Prayer, one of The Canonical Hours in Eastern Orthodox, Oriental Orthodox, Catholic (both Latin and Eastern), Lutheran, and Anglican Liturgies. The word for this Fixed Prayer Time comes from the Latin “Vesper”, meaning “Evening”.[1]

Vespers typically follows a set order that focuses on the performance of Psalms and other biblical Canticles. Eastern Orthodox Services advertised as “Vespers” often conclude with Compline, especially the All-Night Vigil.[2] Performing these Services together without break was also a common practice in Mediæval Europe, especially Secular Churches and Cathedrals.[3]

Old English Speakers translated the Latin word “Vesperas” as “æfensang”, which became Evensong in Modern English. The term is now usually applied to the Anglican variant of the Service that combines Vespers with Compline, following the conception of Early-16th-Century worshippers that conceived these as a single unit. The term can also apply to the Pre-Reformation form of Vespers or forms of Evening Prayer from other denominations.[4]

Vespers is usually Prayed around Sunset. In Oriental Orthodox Christianity and Oriental Protestant Christianity, The Office is known as “Ramsho” in The Indian and Syriac Traditions; it is Prayed facing The East by all members in these denominations, both Clergy and Laity, being one of the Seven Fixed Prayer Times.[5][6]

The following Text is from “The Liturgical Year”.
By: Abbot Guéranger, O.S.B.
Volume 10.
Time After Pentecost.
Book I.
The Office of Vespers, or Evensong, consists firstly of the five following Psalms. For certain Feasts, some of these Psalms are changed for others, which are more appropriate for these Feasts.
After The Pater and The Ave have been said in secret, The Church commences this Hour with her favourite supplication:
Versicle: Deus, in adjutorium meum intende.
Response: Domine, ad adjuvandum festina.
Gloria Patri, et Filio, et Spiritui Sancto,
Sicut erat in principio, et nunc et semper, et in sæcula sæculorum.
Amen.
Alleluia.
Antiphon: Dixit Dominus.
The first Psalm (Psalm 109) is a Prophecy of the future glories of The Messias. The Son of David shall sit on The Right-Hand of The Heavenly Father. He is King; He is Priest; He is The Son of Man, and The Son of God.
His enemies will attack Him, but He will crush them. He will be humbled, but this voluntary humiliation will lead Him to The Highest Glory.

Psalm 110 is then sung.
The next Psalm (Psalm 111) sings the happiness of the Just Man, and his hopes on the day of his Lord's coming. It tells us, likewise, of the confusion of the sinner who shall have despised the Mysteries of God's love towards mankind.

Psalm 111 is then sung.
The next Psalm (Psalm 112), Laudate Pueri, is a Canticle of Praise to The Lord, Who, from His High Heaven, hath taken pity on the human race, and has vouchsafed to honour it by The Incarnation of His Own Son.

Psalm 112 is then sung.
The fifth Psalm (Psalm 113), In Exitu, recounts the prodigies witnessed under the ancient Covenant: They were figures, whose realities were to be accomplished in the mission of The Son of God, Who came to deliver Israel from Egypt, emancipate The Gentiles from their idolatry, and pour out a Blessing on every man who would consent to fear and love The Lord.

Psalm 113 is then sung.
After the five Psalms (above), a short Lesson from The Holy Scriptures is read. It is called Capitulum, or, Little Chapter, because it is always very short. Those Capitulums for the several Festivals are given in The Propers of each.

The Capitulum is then read.
Then follows the Hymn. We here give the one for Sundays (Lucis Creator). It was composed by Saint Gregory the Great. It sings of Creation, and celebrates the praises of that portion of it which was called forth on this first day, viz, The Light.

The Hymn is then sung.
The Versicle, which follows the Hymn, and which we give here, is that of the Sunday; those for the Feasts are given in their Propers.
Versicle: Dirigatur, Domine, oratio mea.
Response: Sicut incensum in conspectu tuo.

Then is said the Magnificat Antiphon, which is to be found in the Propers.
After this, The Church sings The Canticle of Mary, The Magnificat, in which are Celebrated The Divine Maternity and all its consequent Blessings. This exquisitely sweet Canticle is an essential part of The Office of Vespers. It is The Evening Incense, jast as the Canticle Benedictus, at Lauds, is that of The Morning.

The Magnificat Antiphon is then repeated.
The Prayer, or, Collect, is then said. It is given in The Proper of each Feast and Sunday.
Versicle: Benedicamus Domino.
Response: Deo Gratias.
Versicle: Fidelium animæ per misericordiam Dei, requiescant in pace.
Response: Amen.
Thus ends Vespers. 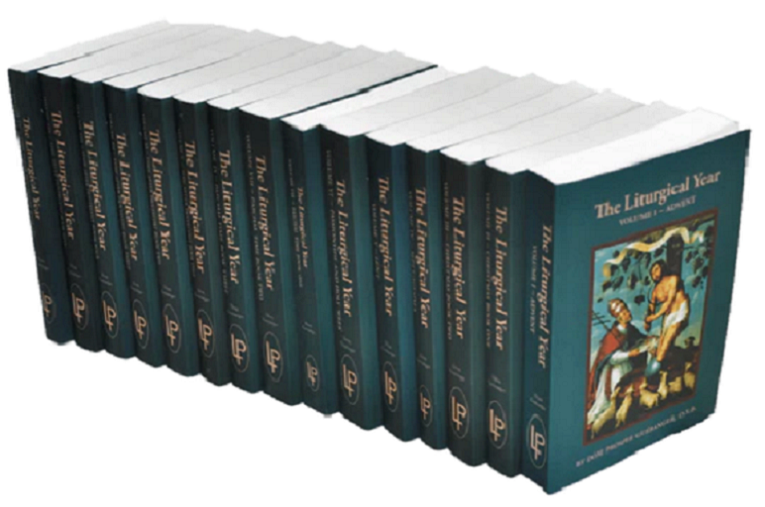 “The Liturgical Year”.
By: Abbot Guéranger.
Available from
SILVERSTREAM PRIORY
Posted by Zephyrinus at 01:00:00
Labels: On The Office Of Vespers For Sunday And Feasts During The Time After Pentecost.