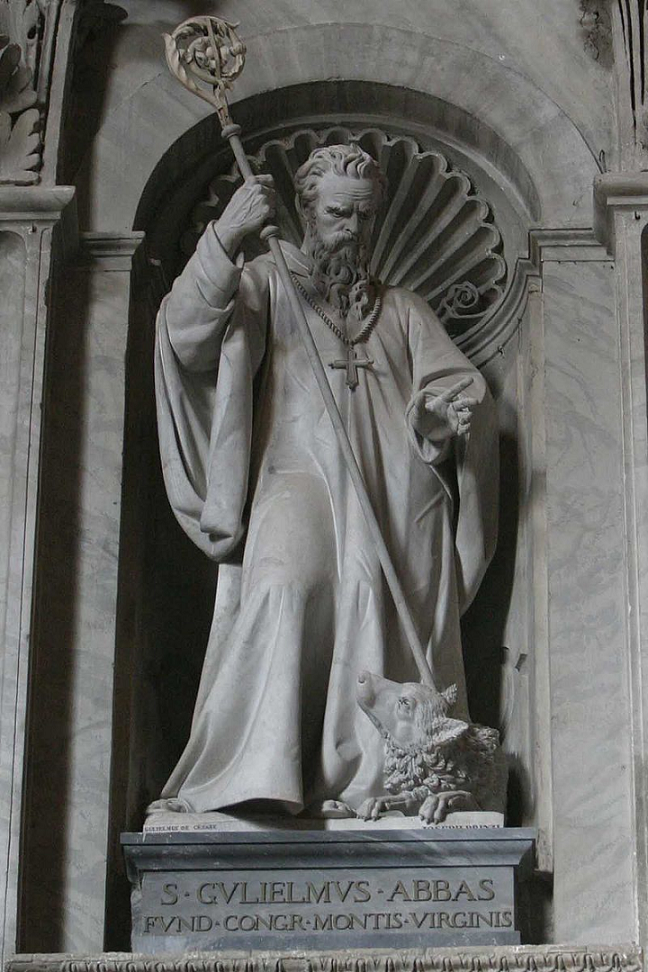 Like Moses, to whom God gave His Law on the mountain (Epistle), under the guidance of Heaven, he gave to the Congregation of Hermits, whose father he became (Communion), a Rule, inspired, in a great measure, by that of Saint Benedict.

His holy life was entirely spent in the meditation of Divine things (Introit), and became renowned by his numerous Miracles.

After having foretold the moment of his death, he fell asleep in The Lord in 1142, and in Heaven his brow was encircled with "the Crown of Precious Stones" (Gradual, Offertory), the symbol of his virtues.

Let us walk in the footsteps of Saint William, with the help of his Prayers (Collect). 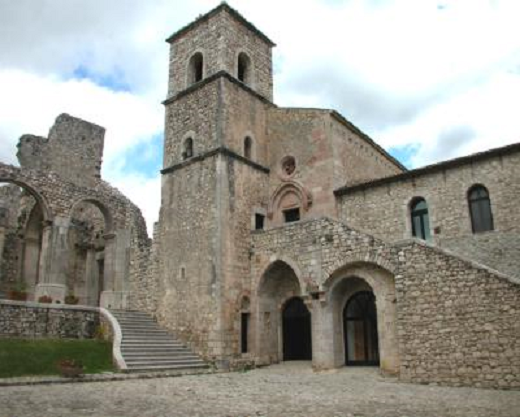 English: The Abbey of San Guglielmo al Goleto, in what is now Sant'Angelo dei Lombardi, Italy, was Founded by Saint William of Vercelli in 1114. It was started as a female Cloister, with a small attached Monastery for the spiritual guidance and economic assistance of the Nuns.
The period 1135-1515 was known as The "Age of the Nuns." The Cloister became wealthy from 1135 to 1348 until The Black Death struck and the Cloister began to decline. On 24 January 1506, Pope Julius II declared that, upon the death of the last Abbess, the Cloister would be closed, which occurred in 1515.
The “Age of The Nuns” was followed by the “Epoch of The Monks” from 1515 to 1807. When the Cloister closed in 1515, the Monastery merged with that on Montevergine and began to grow. Pope Sixtus V, who was also Superior of The Franciscan Convent of Sant'Angelo dei Lombardi, accelerated this growth. The Monastery reached its peak between the 17th- and 18th-Centuries.
In 1807, The King of Naples, Joseph Bonaparte, ordered the Abbey closed. Saint William's body was moved to Montevergine and the furnishings of the Abbey were looted. The Abbey remained abandoned until 1973, when a Monk of Montevergine, Lucio M. De Marino, obtained permission to relocate to Goleto, re-occupying the Abbey and beginning its restoration. In 1989, the Abbey was entrusted to The Little Brothers of Jesus
Español: Abadia de Goleto, Campania, Italia.
Photo: 23 October 2009.
Source: Own work.
Author: Bocachete
(Wikimedia Commons)
Saint William. Abbot.
Available on YouTube at
YOU TUBE

He was born into a noble family of Vercelli, in North-West Italy, and brought up by a relation after the death of his parents. He undertook a Pilgrimage to Santiago de Compostela, Spain. Catholic Tradition states that, on his Pilgrimage to Compostela, William encircled his body with iron bands to increase his suffering.

He then lived as a Hermit on the summit of Monte Vergine (then known as Monte Vergiliana), between Nola [Editor: See Saint Paulinus of Nola - Feast Day two days ago, 22 June] and Benevento. Here, he attracted a number of followers and founded the Monastery of Montevergine.

While at Montevergine, William of Vercelli is stated as having performed Miracles. King Roger I of Sicily served as a Patron to William, who Founded many Monasteries for men and women in Sicily. The Catholic Encyclopedia states that King Roger I built a Monastery opposite his Palace at Salerno, Italy, in order to have William always near him.

Saint William died at Goleto, a Daughter House of Montevergine, near Nusco, Province of Avellino. Catholic Tradition states that William foresaw his own imminent death “by special revelation”.